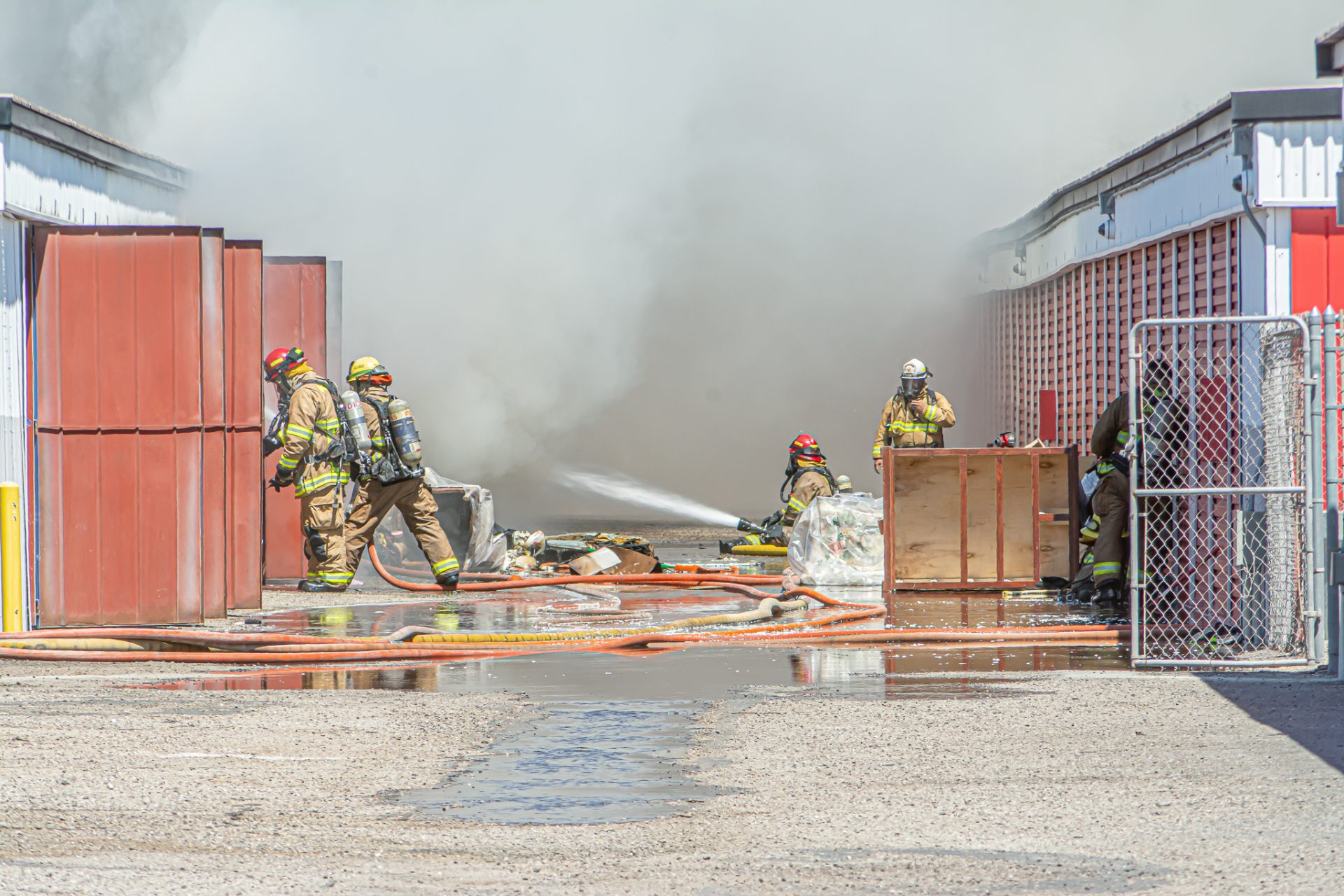 A firefighter (center right in crouching position) sprays a stream of high-pressure water in the heart of a storage unit fire as other crew members (left) also douse the contents of the units at A-American Self Storage at 1299 N. Imperial Ave. on Wednesday, May 19. | CAMILO GARCIA JR. PHOTO
In Public Safety

EL CENTRO — As temperatures reportedly peaked at 102 degrees around midday Wednesday, May 19, a third and partial fourth alarm was sounded for reinforcements from around the Valley to battle a blaze at a series of interconnected storage units that saw several firefighters overcome with heat exhaustion.

No major injuries were reported, yet AMR ambulance crews were on standby at the entrance of A-American Self Storage at 1299 N. Imperial Ave. to assist the many firefighters working the scene of the fire that was first reported around 1:30 p.m., near the height of day’s sun and heat.

An El Centro police officer who spotted the flames reported the fire, according to radio traffic.

“A total of 90 storage units were affected with 40 suffering heavy fire damage,” he stated.

In all, at the height of the blaze, about a half hour after El Centro fire crews first arrived and then called the third alarm, nearly 40 fire personnel assisted in the efforts.

Although Ceseña’s press release made no mention of firefighters falling ill from the heat, he stated that “three firefighters received minor injuries during the firefight and are expected to fully recover personnel.” No civilian or other major injuries were reported.

The heat-related exhaustion was witnessed by a photojournalist working the scene for  a couple hours.

All fire units finished mopping up the scene at 8:24 p.m., according to the press release.

El Centro fire is investigating the incident to determine the cause of the fire. Any witnesses or individuals with information can call 760-337-4530.

(This story was updated at 12:30 p.m. Friday, May 20 with information from the El Centro Fire Department.)

Next
Victim’s Identity, Cause Pending in Fatal Holtville Trailer Fire