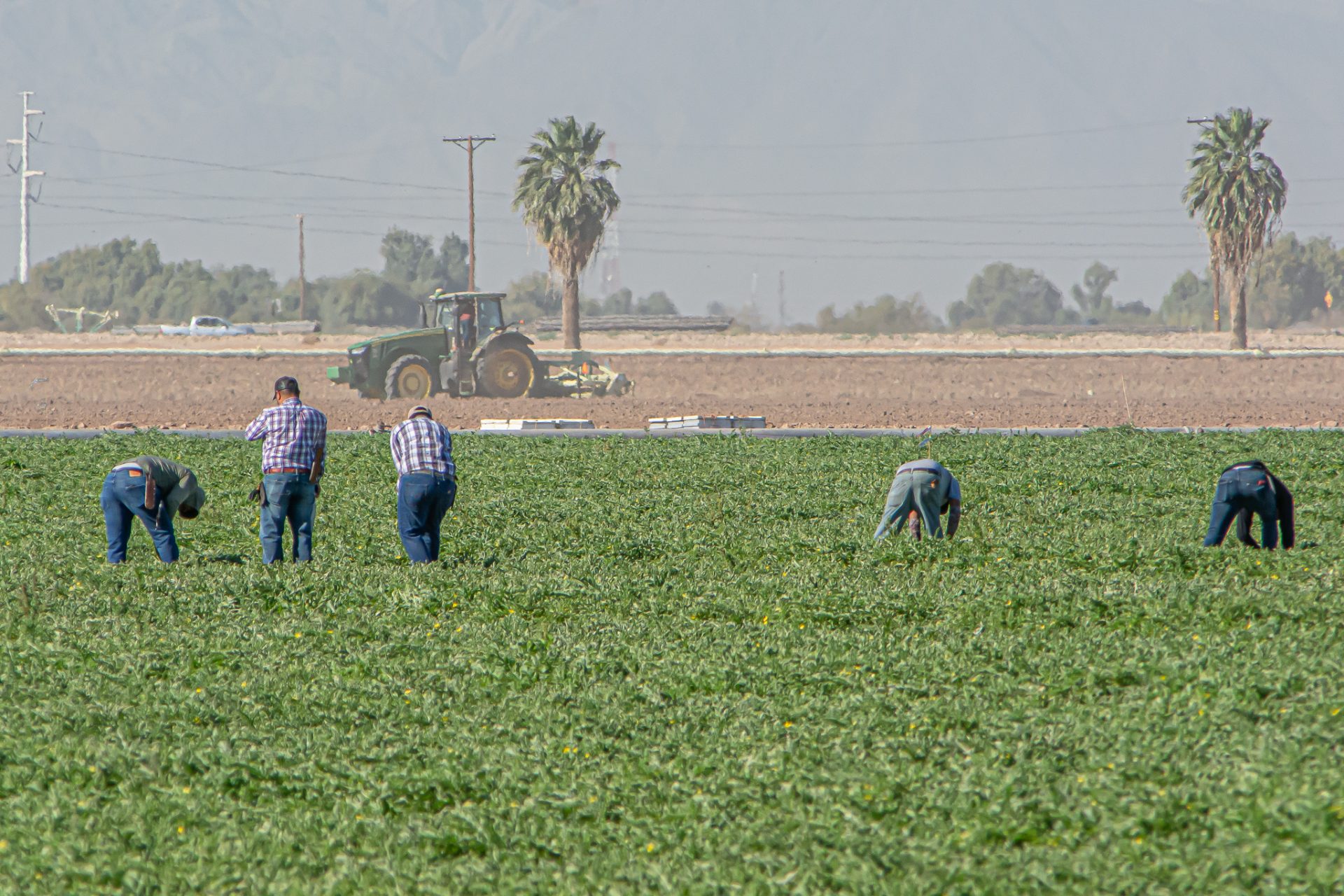 Laborers work a melon field off McCabe Road near Holtville on Thursday, May 20. | CAMILO GARCIA JR. PHOTO
In AgricultureCOVID-19

A U.S. government official once asked the late Westmorland farmer Al Kalin what it takes to grow a crop in the Imperial Valley.

“Well,” Kalin said, addressing the official seated on a panel for Salton Sea restoration, “you put a seed in the ground and add water.”

Kalin was right. A crop needs soil, water, and sunshine to grow, and Imperial Valley’s farmers have generations of know-how in making the desert bloom.

But all that knowledge and expertise was no match for the coronavirus pandemic, which smashed into the Imperial Valley, derailed the industry, and left farmworkers vulnerable to the ravages of the virus.

The pandemic exposed numerous weaknesses at the state and local levels that Valley groups were forced to address.

As COVID-19 infection rates in Imperial County drop, and statewide restrictions ease, growers and farmworker advocates are cautiously optimistic that they can get back to the business of growing and harvesting while maintaining the momentum that carried them through the crisis.

Gov. Gavin Newsom brought California to a standstill in March 2020 with his shelter-in-place order. The idea was to stanch the spread of the coronavirus by limiting people’s exposure to each other. But it also forced some of the largest produce buyers — foodservice distributors and dining establishments — to close.

Valley growers felt the effects immediately. Many of them had lucrative contracts with foodservice distributors. There were three to four weeks left of the harvest when buyers backed out.

“Half of our veggie industry goes to food service. That basically went to zero,” J.P. LaBrucherie, an El Centro farmer, told the Calexico Chronicle.

Without any buyers, it didn’t make financial sense to harvest those crops, so growers were forced to leave produce in the fields.

“We plowed under over 4 million heads of romaine,” LaBrucherie said. “We grow about 20 commodities. More than half of our stuff was being plowed under. Nobody wanted it.”

Jack Vessey, a Holtville grower, was in a similar situation. He, too, had committed about half of his produce to foodservice distributors.

“The produce season of fall 2020 and winter-spring 2021 was difficult,” Vessey said. “A lot of blood and sweat was left in the ground.”

About 50 percent of LaBrucherie and Vessey’s operations are for foodservice, and the other half is for retail distributors, such as supermarkets. With restaurants closed and people forced to stay home and cook for themselves, demand from grocery stores and big-box operations like Wal Mart jumped 20 to 30 percent.

“The retail sector went up about 25 percent, but we lost 50 percent of our business,” Vessey said. “If you were all in food service, that was tough.”

At the border, meanwhile, it was chaos.

Some of the lanes were closed, crossing times increased, and farmworkers waiting to cross into Imperial Valley to work were forced to spend significantly longer periods of time in close proximity without any personal protection equipment, such as masks or hand sanitizers. There weren’t any bathroom facilities or hand-washing stations.

Buses cut back their operations, forcing workers to cram together in smaller vehicles.

“When the pandemic started, we had all these workers crossing the border, and there was zero (government) effort to create sanitary conditions,” said Luis Olmedo, executive director of social justice organization, Comite Civico del Valle.

That lack of effort as well as other unmet needs spurred Olmedo and other Valley residents to organize on behalf of the farmworkers and laborers. Working with the newly formed Imperial Valley Equity and Justice Coalition and other local and regional social justice groups, they formed Salud Sin Fronteras, which was dedicated to health equity concerns around COVID and farmworkers.

“The gap we tried to fill (was) to make sure workers were protected to and from their work and home,” Olmedo said.

With the horrible spring 2020 harvest behind them, growers bet that the fall harvest would be better, and planted accordingly. They bet wrong.

“Things stayed bad,” LaBrucherie recalled. “It was a continued bloodbath. Week by week, it wasn’t as much of a bloodbath as spring.”

Further complicating matters, LaBrucherie didn’t have enough people to irrigate and harvest the baby leaf lettuce and cabbage that he had in the ground.

His foreman and growers stepped up, and they did an OK job, he said, but those efforts could not make up for the shortage of employees, even with coronavirus safety procedures in place.

“I felt we had adequate masks and PPEs,” he said. “People avoided work out of fear. Rightfully so, people were scared. We had about 40 percent of our workforce infected by this disease.”

That shortage of workers prompted LaBrucherie to accelerate his shift to automation. He bought automated lettuce thinners and weeding machines.

While necessary for LaBrucherie, that shift from manual labor to automation has Olmedo alarmed. The coronavirus pandemic is easing, Valley farmers are conserving more water, and he fears that those changes will hurt the workers.

“The industry itself has a lot of access to dollars from water sales,” he said. “Those dollars aren’t reaching the community.”

Vessey, the Holtville farmer, said he was happy to see demand pick up, and wished for better fundamentals.

“I’m happy that the American consumer pays less per capita for food than other countries,” he said.

“With the risks that we have, our risk-to-rewards profile, we’re one the worst businesses in the world. People know we’re producing the best food your body can have. I don’t care whether you eat at home or in a restaurant, eat lettuce.”