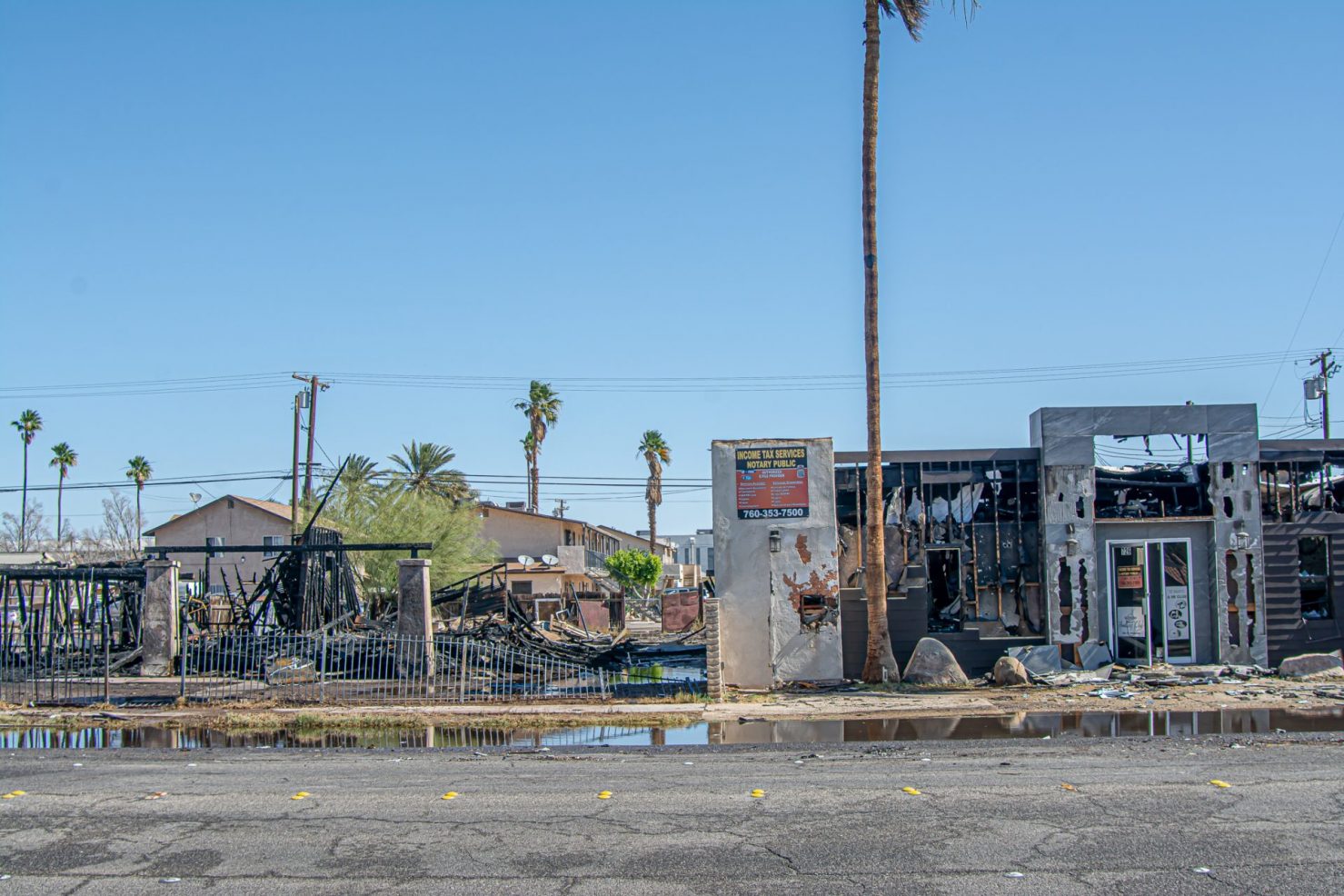 The aftermath of the second of two early-morning El Centro fires on Saturday, May 22 that started at 734 Broadway Ave. (left) and spread to the attic of 726 Broadway Ave. (right) by wind-blown embers is shown. | CAMILO GARCIA JR. PHOTO
Home
Public Safety
In Public Safety

EL CENTRO — In the third and fourth significant fires in the city since midweek, what appeared to be a pair of intentionally set blazes just one hour and two blocks apart sent El Centro crews scrambling from one location to another in what one official said could be connected incidents, but at this point that connection is tenuous.

Stopping short of calling the fires textbook cases of arson with malicious intent, El Centro fire Battalion Chief Cedric Ceseña on Saturday mid-morning, May 22, said both blazes were suspicious in nature, with the first starting outside a vacant building among trash and vegetation and the second inside an abandoned, previously burned home without power or gas running to it.

“Obviously, there was no reason to be a fire at either one of those locations. Potentially it could have been a warming or a cooking fire, but, yes, technically that would be an arson,” Ceseña said. “It was pretty windy and cold in the morning. The potential exists that a homeless person was squatting there. I don’t have an answer at this point in the investigation.”

As the investigation proceeds, he said, further information could reveal itself. As of yet, though, a link to the fire is merely circumstantial.

Around 3:30 a.m. Saturday, police and fire dispatch received several calls of a fire at the former Imperial Valley Blind Center building at 473 Park Ave., where the blaze that had started outside had found its way into the attic space.

Just minutes after the first wave of El Centro fire crews arrived, a second-alarm was sounded, calling in mutual aid from the Imperial, Imperial County, Holtville, and Calexico fire departments for a total of 22 firefighters.

As crews were still at the first site, reports of the second fire came in around 4:30 a.m. just over two blocks to the west and two blocks south at what had been a single-family home at 734 Broadway Ave., which had been vacant for some years and had previously caught fire.

That structure was fully involved with heavy fire and smoke showing, and strong winds had carried embers to the attic of a commercial business to the immediate east at 726 Broadway.

A second-alarm called on that fire as well, and both El Centro and mutual-aid units were moved from Park Avenue to the Broadway fires.

“The single initial fire attack crew was faced with high winds and heavy fire growth, forcing personnel to fight the fire with large fire hoses. Adjacent homes and businesses were protected from further fire spread, but the fire had extended to a nearby commercial structure due to the wind before (the) Fire Department’s arrival,” according to the El Centro fire press release. “Despite aggressive efforts to keep the fire from spreading, the fire spread through the building.”

Additional crews from the county and the city of Brawley were called in for the second fire, and at its height, some 28 fire personnel were on scene.

No civilians or firefighters were hurt in either incident.

Early reports were that an individual was in custody for suspected arson in the second fire, but Ceseña said that person was released after being questioned.

“There were so many people walking around the downtown in the middle of the night,” he said.

On Wednesday, May 19, some 50 firefighters assisted El Centro crews in a third-alarm blaze at A-American Self Storage on North Imperial Avenue, and early Friday morning, May 21, another two-alarm fire saw the Carl’s Jr. fast-food restaurant on Fourth Street just north of Interstate 8 burn to the ground after a fire started in the kitchen area. Both of those incidents are also under investigation.

Next
Spartan Senior’s Art is Bound for Capitol