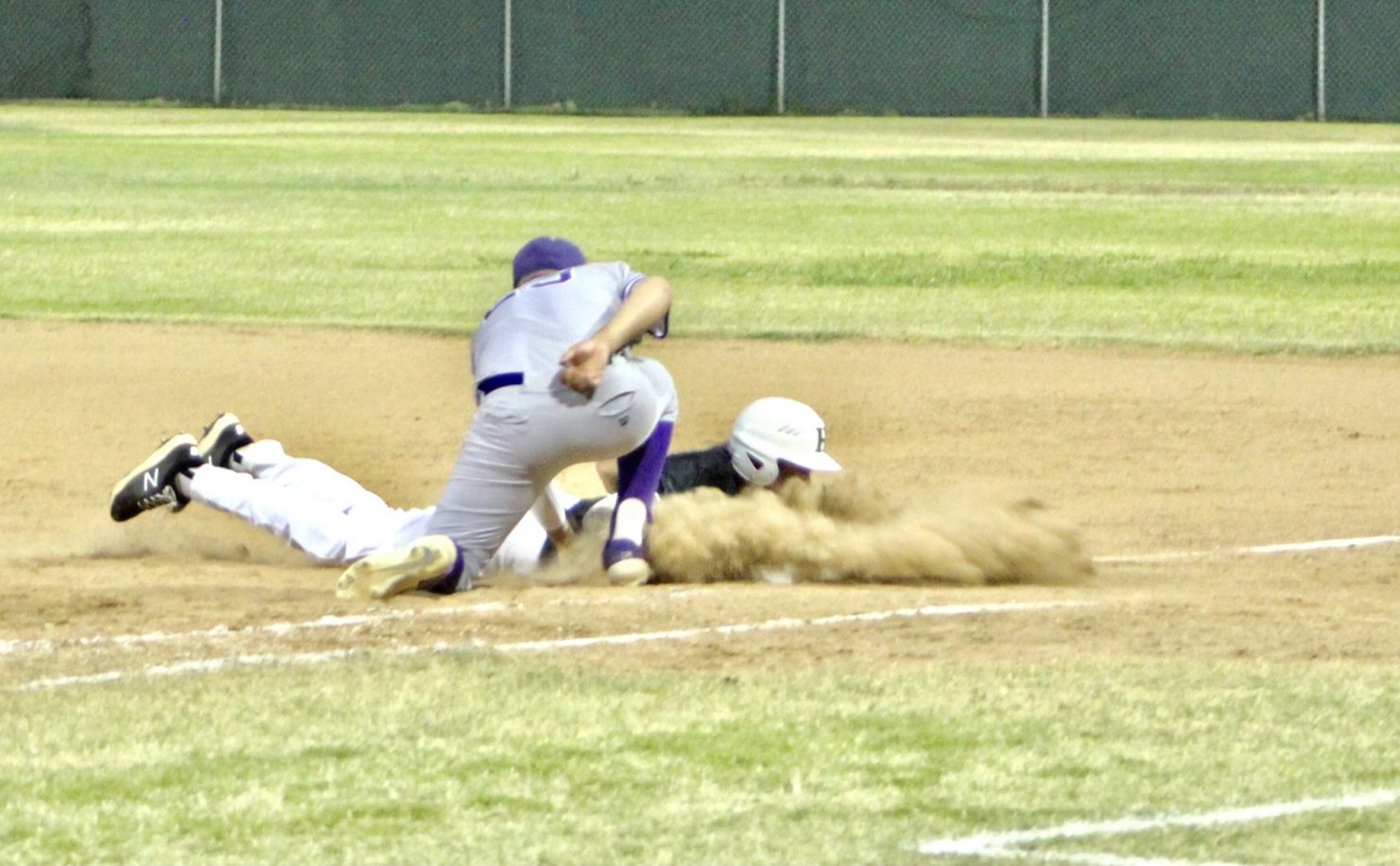 Holtville High School junior J.R. Garewal dives back to first base on a pickoff attempt by Southwest High of El Centro during an Imperial Valley League game in Holtville on Tuesday, May 18. | CATHI PHILLIPS LARIOS PHOTO
Home
Sports
In Sports

HOLTVILLE — After an offensive outburst of 40 runs in three games, the bats went silent for the Holtville High School baseball team in a doubleheader against Imperial Valley League-leading Southwest High of El Centro, scoring just three runs in two games.

The Vikings (11-8 overall, 7-5 in IVL play) piled on 40 runs against Palo Verde of Blythe and Calipatria in three games a week prior, but against the Eagles, the offense seemed to be in neutral for 17 innings, losing 6-3 at home on Tuesday, May 18, and then falling 7-0 at Southwest on Friday, May 21.

In the May 18 game, Holtville rallied from a 3-0 deficit to tie the game at 3-3 after six innings. Neither team was able to score over the next three innings before Southwest broke through for three runs in the top of the 10th inning and held the Vikings scoreless in the bottom half to win the game, 6-3.

The Vikings were only able to bang out three hits with freshman John Chambers and junior Rafa Espinoza each getting a hit and RBI.

In Friday’s game in El Centro, Southwest took a 1-0 lead after the first inning and it remained that way until the bottom of the fifth when the Eagles soared for five runs to essentially put the game away. They would add an insurance run in the bottom of the sixth while keeping the Vikings scoreless for the 7-0 shutout.

Holtville’s bats again struggled with just four hits in the game and only one double off the bat of senior Erik Garcia.

Junior J.R. Garewal took the loss while pitching a complete game for the Vikings, allowing seven runs on six hits with one walk and eight strikeouts.

Southwest senior Derek Silva dominated on the hill, allowing just the four hits and one walk while striking out 12.

Holtville sits in fourth place in the IVL with two games left in the regular season, hosting Central at 6 p.m. on Tuesday, May 25, and then traveling to El Centro to face the Spartans at 6 p.m. on Friday, May 28.