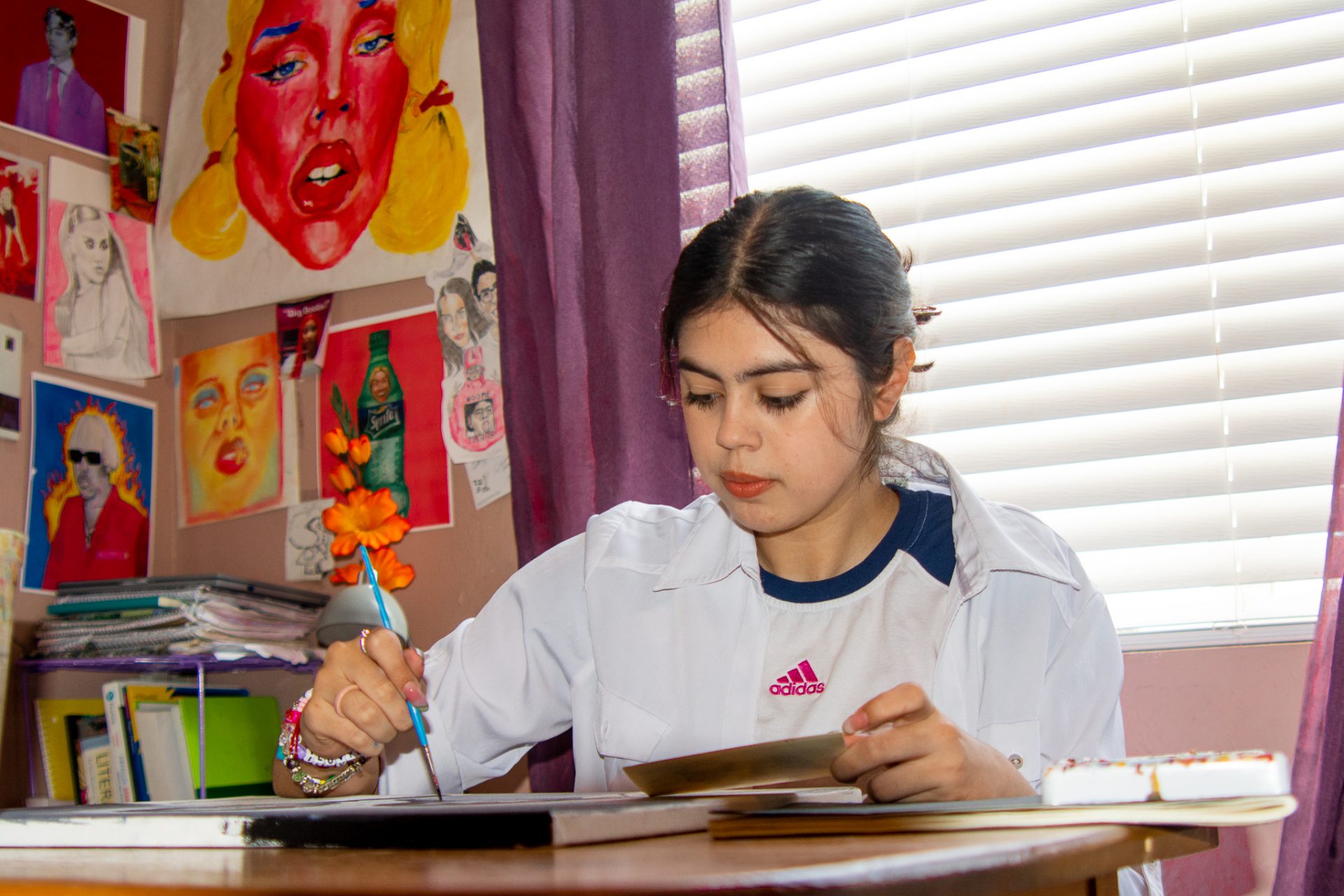 Priscila Jimenez Corrales, 17, a senior at Central Union High School in El Centro, works on a painting in her bedroom, her walls adorned with previous works, some on canvas and some of scraps of paper drawn with pen or colored pencils. Priscila recently won the Congressional Art Competition for the 51st District, and will soon have her painting, “On Nana’s Couch,” hanging in the U.S. Capitol in Washington, D.C. | CAMILO GARCIA JR. PHOTO
In EducationFeatured StoriesRegional News

Priscila Jimenez’s “On Nana’s Couch” Tells Story of a Family Divided by Borders, Dealing with Autism

Around El Centro’s Central Union High School campus, Priscila Jimenez Corrales is known for her artistic skills, be it with pen, paintbrush, or pencil.

It’s her calling card in many ways.

As the publicity head for the Associated Student Body, the 17-year-old senior is poster maker extraordinaire, she’s been the courtroom sketch artist for the Spartans’ mock trial team since she was a sophomore, and as president of the school’s environmental Green Team, she’s designed T-shirts for that club and others.

“I guess I’m known for that, because even in middle school people asked me to draw them, or just draw stuff for them. So, I’ve always had people asking me to draw,” Priscila said during a recent interview. “I draw basically all the time. My notebooks are just full of doodles.”

That reputation rocketed outside her campus orbit in a big way earlier this month when she was announced as the winner of the Congressional Art Competition for the 51st District, home to U.S. Rep. Juan Vargas, D-Chula Vista.

Priscila’s submission, a painting she named “On Nana’s Couch,” was chosen by an independent panel of judges from the Imperial and San Diego counties, selected by Vargas’ office.

“It’s something that I didn’t really expect, and I’m really honored to be selected as winner. I’ve always been told, ‘Oh, you draw really good.’ But this time, I feel like it’s more meaningful, since it’s like several people agreed. And it’s, I don’t know, it’s just something that’s really nice,” said Priscila, giggling nervously.

Soon, the painting, which is still in Priscila’s possession, will be packed up and shipped to the Capitol in Washington, D.C., to be part of a year-long exhibition of winning student works from all the nation’s participating Congressional districts.

Given the complexity and composition of the piece, it’s surprising that Priscila is almost entirely self-taught, taking her first official art class just this year.

“On Nana’s Couch” was started over the summer and finished around September or October 2020, before that small slice of formal training really got off the ground. Much of what Priscila has done on canvas has largely been her experimenting and consulting online tutorials or other artists’ Instagram accounts.

“Growing up, I just really did pencil and pen. I didn’t really have access to paints. And then I think I started like trying out paints, like, in my freshman year of high school,” she said. “That’s (‘On Nana’s Couch’) the first painting I’ve ever actually completed and finished.”

This notoriety is not sudden, nor is it a surprise for the people who know Priscila.

The painting itself previously had the distinction of winning a “silver key” in the west regionals of the prestigious Scholastic Art & Writing Awards, a national competition established in 1923.

Before that, as an individual competitor, her courtroom sketches for the Central mock trial team made it to the state tournament in her sophomore year, and again this year.

“I feel so happy that now a lot of people are knowing her work,” said Priscila’s mother, Martha Turnage, who brought her four children to the United States from San Luis Rio Colorado, Sonora, Mexico, nine years ago. “I think it’s a good opportunity for her to show other kids that’s there’s always hope, no matter the situation, if you focus on something, especially school. … She’s doing really good in school. … Maybe it will help her to get some scholarships.”

Priscila figures to finish near the top of her class, where late last week she said she believes she will graduate with a grade-point average of at least 4.0. She has already committed to attending University of California, Davis, where she intends to study sustainable environmental design. She added she is also on the wait list for UC Berkeley and is now applying for scholarships.

Madaleine Macholtz, a teacher at Central, was happy to share her thoughts on Priscilla. Macholtz has known Priscila for three years, where she was her sophomore chemistry instructor and, this year, her Advanced Placement Environmental Science teacher.

Yet it is Priscila the person who Macholtz was more interested in speaking about.

“Most endearing to me is her ability to just be cheerful, right. … So, when I had her in my chemistry class, I could always count on her to make my day, you know, to be that positive force in the day to look forward to,” said Macholtz, who is also Priscila’s adviser on the Green Team.

The challenges Macholtz was referring to were touched on in a statement Priscila gave to Vargas’ press officials in the announcement of her win on his Facebook page on May 7. In speaking about “On Nana’s Couch,” Priscila states:

“I painted my youngest sister sitting on my Nana’s couch while we were visiting family in Mexico for the first time in about nine years. I was inspired to paint this since my sister has a certain gaze that I find unique to her and my brother, both of whom have autism. I wanted to paint that gaze since I find it reflects my sibling’s condition and as well the importance of patience and calmness, something that I find crucial when advancing from difficult circumstances, like the ones we are facing now.”

Within a single painting, an entire backstory emerges of a family struggling, persevering, and, ultimately, overcoming significant challenges brought on by both being separated by a border and living with multiple siblings with Autism Spectrum Disorder.

The subject of “On Nana’s Couch” is 13-year-old, Stephanya Jimenez, a seventh-grader, whose faraway stare is not uncommon with her level of autism, Priscila said, which she indicated is rather high-functioning. Their younger brother, 11-year-old Isaac Jimenez, is mostly nonverbal and requires a deeper level of care.

“My brother’s case is more (difficult). You can tell he has autism,” she said, explaining his condition further when he could be heard screaming in the background. “He can’t speak, and he can’t do a lot of things. But my sister, she’s a little bit better, because she can talk more.”

Seeking better opportunities in the United States, including better education for all of Priscila’s siblings, which includes 14-year-old Central freshman, Diayanna, and better medical care for Isaac and Stephanya was one of the reasons their mother brought the children to the U.S. as an undocumented migrant, Priscila said.

But it came with obvious costs.

As Priscila explained, the painting was based on a photo taken of Stephanya sitting on her grandmother’s couch in San Luis Rio Colorado during the first large-scale family gathering since Priscila’s mom left Mexico.

Priscila, as an Arizona-born American citizen, was able to freely travel to see her father, grandparents, and extended family members, but until recently, when Martha Turnage was able to get her immigration status sorted out, the immediate family had not spent time together with its San Luis counterparts in nearly a decade.

Recently, Priscila has been working on a new painting, one for her mother — a portrait of her grandparents drawn from an old black-and-white photograph.

Art, family, and Mexico run deep through Priscila’s soul. She essentially started drawing around age 2, influenced by her artistic father, only taking it seriously much later. But Priscila admits, when all is said and done, art is a passion not a pursuit.

She wants a career that she can use to help her native San Luis, and she’s understood from a young age that education was the route to achieve that.

Her mother said when they arrived in El Centro, Priscila could speak no English, but she worked so hard, and she has worked hard every step of the way, to help her siblings, to do well in school, to make her dreams a reality.

Macholtz, her AP Environmental Science teacher, has spoken with Priscila about some of this.

“I know that that’s what really drives her, that whole feeling like she had this really phenomenal opportunity, and that her mom made significant sacrifices to allow her to be able to pursue what she wants to pursue, and being very driven by that,” Macholtz said.

To that end, Priscila said she wants to make San Luis safer, which she said is “very dangerous.” She hopes to achieve that through urban planning.

“I would basically like to bring resources or opportunities into the city. … I want to bring like a senior center back in, places people can go and feel safe. Because there’s not a lot of things going on over there,” Priscila explained, adding it will be a process and not something that happens right away.

“I think in the beginning, I will develop my career here in America, just to get more experience and more knowledge. But I do see myself helping people back in Mexico. So that’s something I want to do,” she said.

For now, the passion projects, the art, that part of her still lights up a room — her bedroom, for certain.

One look at her pastel-colored walls, and instead of posters and pictures of musicians or movie stars, it’s her own creations. Fully realized paintings hang next to figure studies and faces sketched on small pieces of paper, all crowded together, jockeying for attention.

Everywhere the eye goes there’s a filled notebook, a paint-encrusted palette, some piece in progress.

“When I actually sit down, and I’m actually trying to work on something (large), it can come pretty fast. It depends on how busy I am,” she said late last week, as she was in the midst of finishing up the school year.

“Like right now, it’s exam season, it’s just like once a month (that I can work on large projects),” she said, “but I’m just drawing, like, little things here and there, everywhere, all the time.”