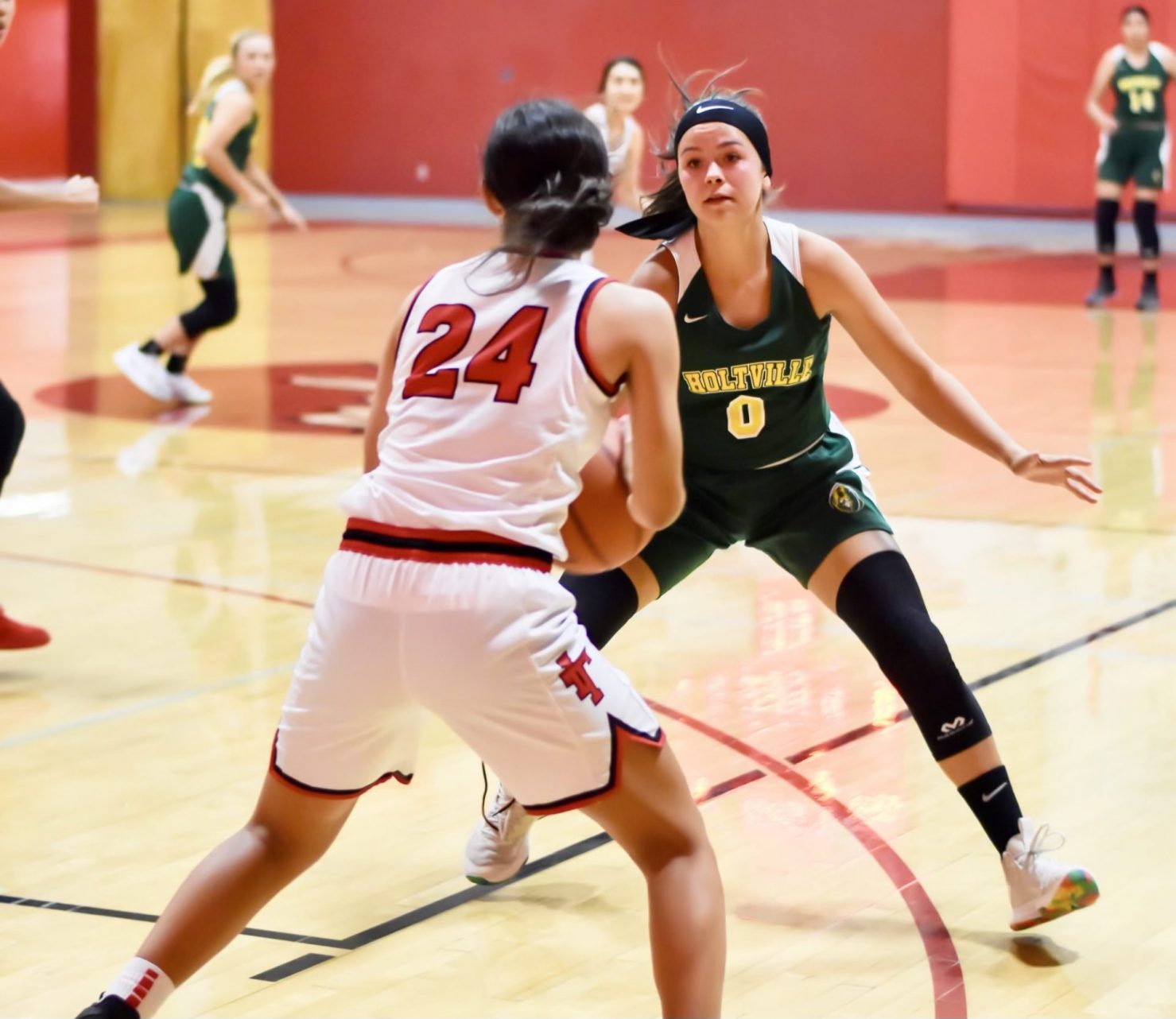 IMPERIAL — It had been more than 17 years since the Holtville High girls’ basketball team tasted victory against Imperial, but that drought ended Friday night, May 21, when the Vikings scored a 59-35 Imperial Valley League victory on the Tigers’ home court.

The matchup was a battle between the Valley’s top-two girls’ teams. Holtville entered the game at 5-0 in IVL action (5-1 overall) and Imperial came in at 4-0 in league play (5-2 overall).

“Everyone knew coming in how big of a game it was and likely was going to determine the IVL champion this year,” said Murray Anderson, Holtville’s seventh-year head coach. “We were fortunate to get off to a good start and continued to shoot well throughout the game.”

The Vikings’ hot start led them to jump on top 8-0 in the opening minutes and hold a 13-7 lead at the end of the first quarter, thanks largely to sophomore Kamryn Walker’s nine opening-quarter points.

Imperial inched closer at the half, trailing 24-19 with 16 minutes remaining.

Walker led a Vikings’ surge in the third quarter with 12 of the team’s 15 points as Holtville built a 39-27 lead heading to the final period.

In the fourth quarter, Holtville junior Orian Anderson stepped up with 10 points and sophomore Julia Moreno had six as the Vikings outscored Imperial 20-8 in the final period to pull away for the 59-35 victory.

Walker finished with a game-high 23 points, six assists and five steals while Anderson had 22 points, 10 rebounds and six assists. Moreno chipped in 11 points and three steals.

“Our guards really controlled the pace of the game. It was certainly their best game of the season as a group and showed what we can do as a team when we’re working together,” Coach Anderson said. “Imperial has been at the top of the mountain for so many years and we have been trying to build and build each year, and we were able to get there tonight.”

The Tigers hadn’t lost to any team from the Imperial Valley since a March 2014 loss to Central Union High in the CIF-San Diego Section Division III semifinals. And the Imperial dynasty had ruled the Desert League (Imperial, Calipatria, Holtville and Palo Verde), capturing 13 straight league championships before all teams were moved into the IVL during this COVID-shortened and delayed season.

On Saturday, May 22, the Holtville girls traveled to El Centro to take on Central Union in a nonleague game and scored a 40-28 victory.

The Vikings led 22-7 at halftime and cruised in for the easy victory. Orian Anderson led the way with 19 points, nine rebounds and five steals while Walker finished with 10 points, eight assists and eight steals. Senior Litzy Velarde added nine rebounds against the Spartans and freshman Vanessa Gonzalez had five blocked shots.

Holtville hosts Southwest of El Centro at 7 p.m. Monday, May 24, in an IVL matchup and hosts its final IVL game at 5 p.m. Thursday, May 27, when Calexico visits the Vikings.

IMPERIAL — The Holtville boys’ basketball team made it three wins in a row after beating Imperial on Friday, May 21, and following that with a blowout win against Central Union on Saturday, May 22.

The Vikings (6-2 overall, 4-1 in IVL action) went to Imperial and led from opening tip to final buzzer, beating the Tigers 50-35 on May 21. Senior Roman Ordonez led the way for the Vikings with 12 points while senior Abraham Ramos and sophomore Angel Perez added 10 points each.

The following afternoon at Central, Holtville broke open a close 13-12 game after the first quarter with a 19-point second quarter to build a 32-18 halftime advantage. A 17-8 third quarter essentially put the game away for the Vikings as they cruised in the final period to a 61-34 victory over the Spartans.

The Vikings host Southwest High of El Centro in an IVL matchup at 5 p.m. May 24 and are scheduled to close out the IVL season hosting Calexico at 7 p.m. May 27.