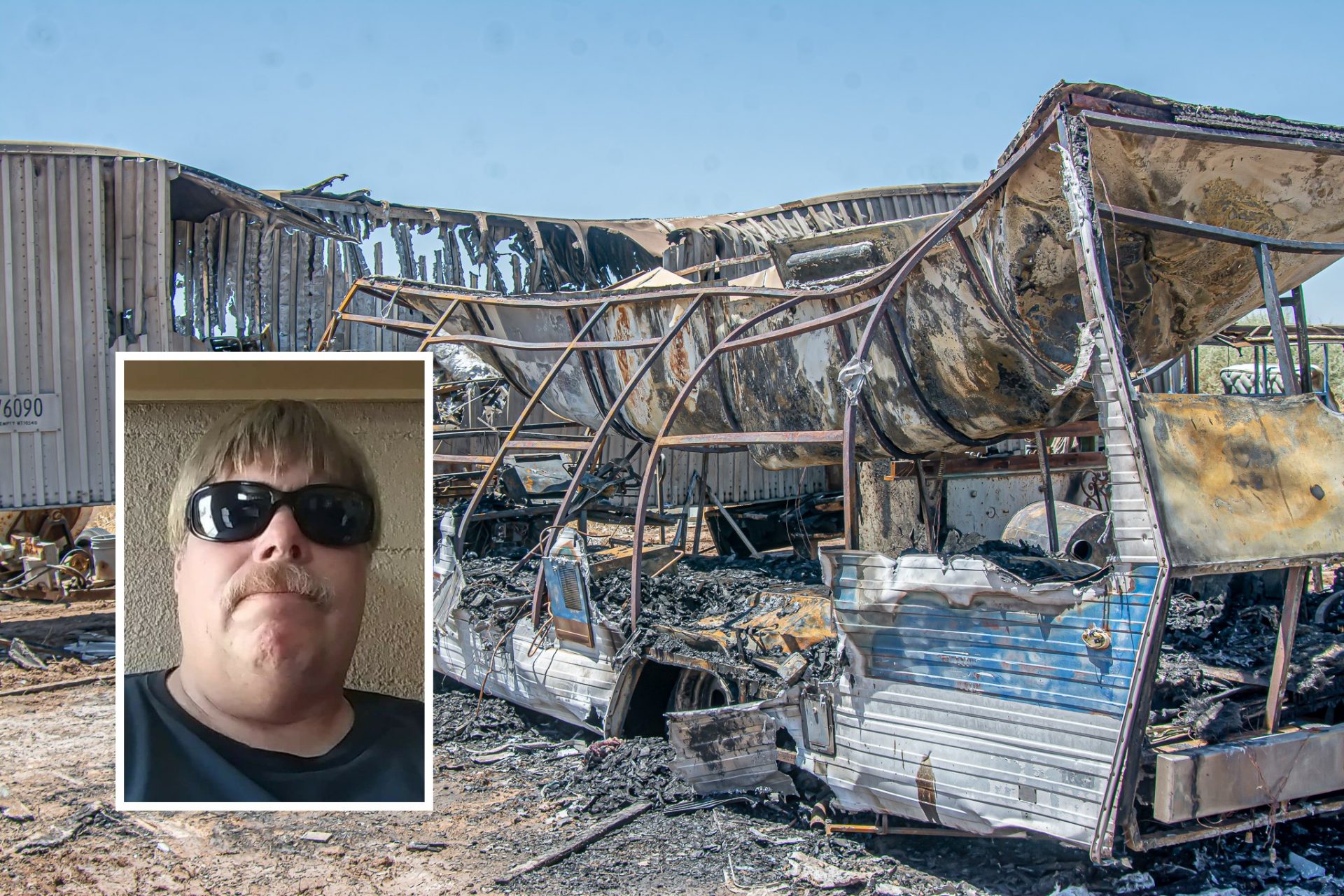 David James Brunton (inset), 52, has been identified through DNA comparison as the man who died in a motorhome fire in the 1700 block of East Thiesen Road north of Holtville on May 14. The shell of his burned-out trailer sits to the rear of the East Thiesen property on the morning of May 15. Firefighters discovered Brunton’s remains burned beyond recognition inside the fully engulfed trailer. Although many in Holtville already know the identity, it was not confirmed by the coroner’s office until Tuesday morning, May 25. | FACEBOOK AND CAMILO GARCIA JR. PHOTOS
Home
Featured Stories
Share

HOLTVILLE — Although many in Holtville already knew who perished in the horrific trailer fire on property off East Thiesen Road north of Holtville nearly two weeks ago, the identity of David James Brunton was not released until Tuesday morning, May 25.

It took that long to identify the 52-year-old Brunton through genetic confirmation due to the state of Brunton’s body, which was burned beyond recognition, his remains found inside the fully engulfed trailer as Holtville fire crews responded to the scene on the evening of May 14.

Brunton’s life ended tragically, yet his final days — and many of his final years, it seems — may have been just as tragic.

The only person who could be reached for comment about Brunton for this story was Turning Point Ministries Pastor Norm Chandler, who was interviewed on May 17, before the positive identification.

“His family at Turning Point is sad to hear of his passing,” Chandler said.

Brunton was a past graduate of the ministry’s men’s home for substance abuse, where he made many friends, Chandler said. He said he was not aware of Brunton having any family that lived nearby but had a father that lived on the East Coast.

Chandler declined to speak further about Brunton, but witnesses interviewed the day of the fire said Brunton was “acting erratically throughout the day” in the hours before the fire.

Reports are that he had worked briefly at the Barbara Worth Country Club in some capacity, but several calls to the facility were not returned on Tuesday afternoon.

Brunton had been seen in recent weeks displaying odd behavior at local sporting events around the high school, and public postings on his social media page indicate a man who may have been in crisis.

He was not a Holtville native by all accounts, yet no one has expressly said what brought him to the area. Yet on Turning Point’s testimonials page on its website, Brunton may have arrived in Holtville in 2014.

In his own words:

“I came to Turning Point Men’s Home broken and homeless after a fallout with a relative in 2014. I came on my own because I was homeless and had nowhere to go. I have left the home a few times, trying to go and make a living for myself on my own, but I always end up back at Turning Point. I came back the last time in November of 2015,” Brunton wrote in what is an undated page.

“I have had some struggles and I cannot say that there have not been times when I wanted to leave again, but I stick it out through the grace of God. It is by His grace that I am still here. I give God all the glory because he gave me this place to go to when I had nowhere else to go. Turning Point has been my home, and I was finally able to complete the program in November of 2016,” he continued.

“I have been given a home and a family, both things that I have not had for a long time, not since the passing of both of my sisters in 2008 and 2009. They were my only true family until I came to Turning Point. Now, I can gratefully call these men my family,” Brunton’s testimonial states.

The last public post on Brunton’s social media page was in mid-March.

Although the medical examiner’s pathology report had yet to be filed as of Tuesday, Brunton’s “manner of death is accidental,” Sgt. Mistriel said.

While it was clear Brunton was alive at the time of the fire — the autopsy showed he was actively breathing in the “super-heated air” around him — it wasn’t clear if he asphyxiated or burned to death.

What is clear from the fire investigation end, though, is that Brunton was trapped inside his small trailer, Holtville Fire Chief Alex Silva said on May 25, referring to the county arson investigator’s report.

The fire was manmade, but all indications are it, too, was accidental, Silva said. The point of origin is unclear, but Silva said the fire appears to have started outside the entrance of the trailer and traveled to the trailer door, before quickly consuming the mobile home.

Silva indicated a working theory at the scene was that a fire was lit in a nearby fire pit, and the winds, which were gusting up to 20 mph that afternoon and evening, pushed the fire toward trash and debris in the area, and possibly ignited nearby propane tanks that, in turn, torched the trailer.

The trailer itself had no door, Silva said, only a screen that melted in the fire, and the inside of the trailer itself appeared as if someone had ransacked it and threw out all the contents except for a mattress.

Reports of the fire came into Holtville fire crews around 6:15 p.m. that evening, where the trailer was situated behind a home in 1700 block of East Thiesen Road on property owned by “some dentist out of Palm Springs,” Silva said.

Coroner investigators were called out around 6:45 p.m.

CORRECTION: Turning Point Pastor Norm Chandler said the Men’s Home’s website is updated monthly. The incorrect information was reported in a previous version of this story.