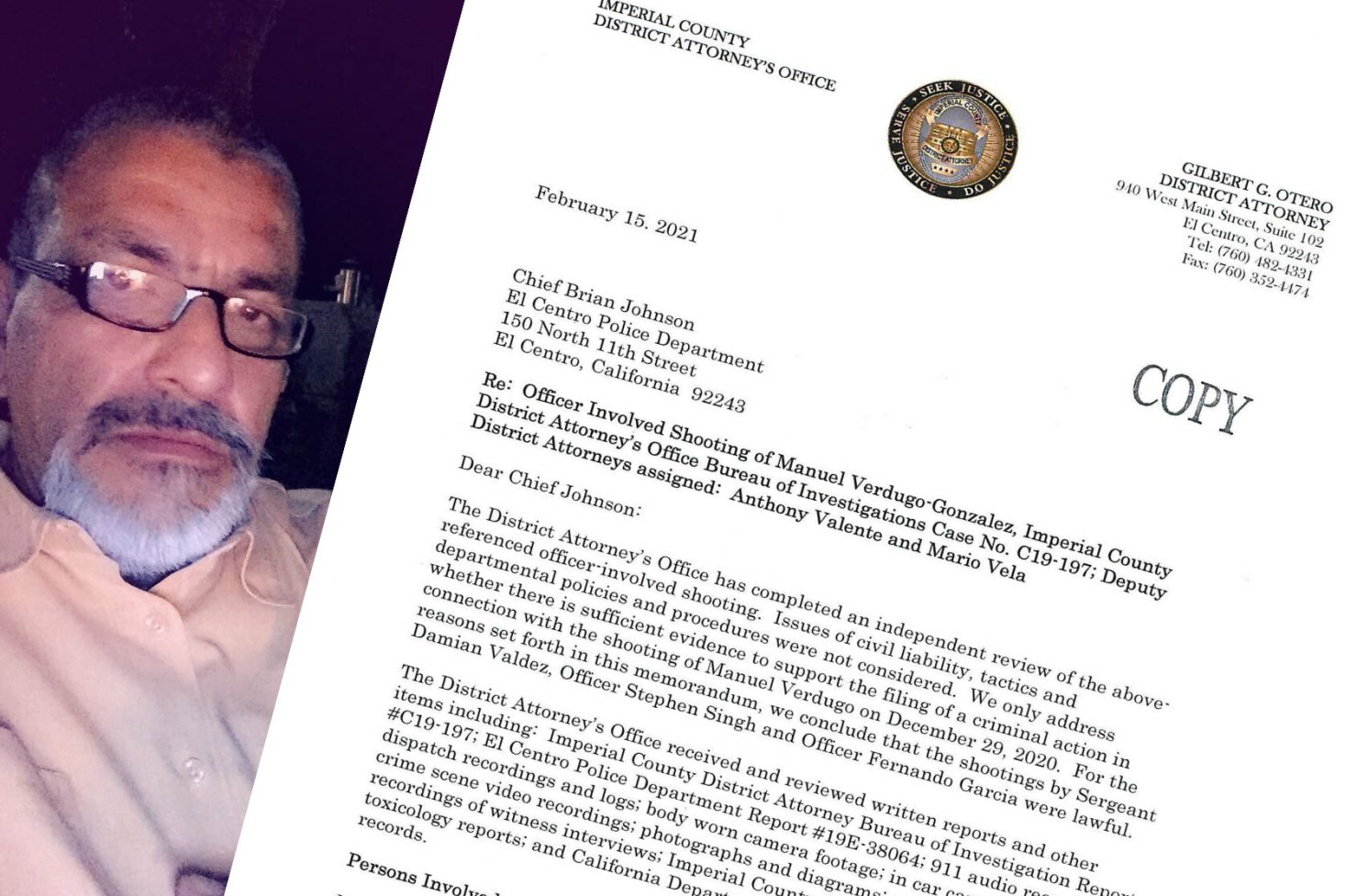 The Imperial County District Attorney’s Office in February completed its investigation into the El Centro police officer-involved shooting death of 51-year-old Manuel Gonzalez Verdugo. The DA’s Office’s investigation determined that the three officers who discharged their firearms at Verdugo were justified in using deadly force. The Police Department is now in the midst of its own internal probe. | FILE PHOTO GRAPHIC
Home
Public Safety
In Public SafetyRegional News

EL CENTRO — The El Centro Police Department is currently conducting an internal review of the fatal Dec. 29, 2019 officer-involved shooting of a knife-wielding El Centro man near the intersection of Imperial Avenue and Main Street.

The department’s review was initiated after the county District Attorney’s Office in February completed its separate investigation into the fatal incident, which left 51-year-old Manuel Gonzalez Verdugo dead of multiple gunshot wounds.

In addition, a federal lawsuit filed in December 2020 by Verdugo’s daughter and his estate alleging the deadly incident violated the decedent’s civil rights is making its way through the court system.

The DA’s Office’s investigation determined that the three officers who discharged their firearms at Verdugo, who can be observed in previously released officer body-worn camera footage advancing on an officer with knives in his hands, were justified in using deadly force.

“Under these circumstances their conduct was reasonable,” the report stated. “Accordingly, we find the shooting to be lawful.”

The El Centro Police Department’s internal review is a confidential personnel matter and no time frame for its completion has been determined, Deputy Police Chief Robert Sawyer stated in an email on April 29.

“We have been delayed while we waited for some information from outside agencies who conducted the primary investigation,” Sawyer stated. “Further, I do not want to rush any investigation as a comprehensive review of all evidence is necessary to determine an outcome.”

The decision by the department to await the conclusion of the DA’s Office’s investigation before starting its own internal review was made at its own discretion, Sawyer said.

The lawsuit was filed in the U.S. District Court for the Southern District of California by Verdugo’s daughter and names as plaintiffs the city of El Centro, the Rite Aid Corp., and police officers Manuel Meza, Fernando Garcia, Stephen Singh, and Sgt. Damian Valdez.

According to the DA’s Office’s report of its investigation, officers Garcia and Singh, as well as Sgt. Valdez, discharged their department-issued firearms at Verdugo as he advanced at Singh with a knife in each hand just west of the busy intersection on the morning of Dec. 29, 2019. Meza did not discharge his weapon.

The DA’s Office’s probe was conducted by its Bureau of Investigations, which assigned Deputy DAs Anthony Valente and Mario Vela to conduct the review. Items that were reviewed included written reports, body-worn and in-car camera footage, audio and video recordings of witnesses, as well as the county coroner’s and toxicology and pathologist reports, and Verdugo’s prison records, to name some.

The probe was limited to whether there was sufficient evidence to support the filing of criminal charges in connection to the officer-involved shooting. It did not take into consideration issues of civil liability, or Police Department tactics, procedures, and policies.

“For the reasons set forth in this memorandum, we conclude that the shootings by Sgt. Damian Valdez, Officer Stephen Singh and Officer Fernando Garcia were lawful,” according to the report sent to ECPD Chief Brian Johnson on Feb. 15.

Prior to the encounter, Verdugo had stolen two knives from Rite Aid and reportedly shouted out loud as he was leaving the store that he did not intend to pay for the knives and for employees to call the police and a sergeant who Verdugo claimed had killed his family.

Once outside of the store, Verdugo reportedly walked to a nearby home on Brighton Avenue and “screamed for someone to come outside” while reportedly holding a knife in his hand.

He then walked to the intersection of Imperial Avenue and Main Street and approached a passing motorist, threatening to kill him. He was also overheard stating that he planned to “go out in a blaze of glory,” the report stated.

Officer Singh was the first to arrive on scene. Upon encountering Verdugo in the intersection, Singh verbally ordered him to stop and drop the knives, to no avail. Officers Meza and Garcia arrived soon after in separate patrol vehicles, with Sgt. Valdez trailing shortly behind, the report stated.

When Verdugo started walking west on Main Street away from the responding officers, Meza was instructed to drive his patrol vehicle around him to block Main Street. While Singh was standing near his patrol vehicle with his gun drawn and pointed at Verdugo, Verdugo ran toward the officers, prompting Garcia, who had retrieved a shotgun from Valdez that shoots less-lethal projectiles, to order him to get on the ground, the report stated.

Verdugo reportedly ignored Garcia’s commands and repeated that he intended to kill an “Officer Rodriguez.” Valdez ordered Garcia to use the less-lethal shotgun, which he discharged twice, hitting Verdugo once, the report stated.

Although Verdugo lost his balance when he was struck by the less-lethal projectile, he reportedly continued to advance with knives in his hands in the direction of Singh. Singh, while retreating, yelled for Verdugo to get down on the ground but was ignored. When Verdugo was within about six feet of Singh, he fired about four times, while Garcia shot once and Valdez shot about seven to eight times, the report stated.

Verdugo was struck a total of nine times and was pronounced dead at the scene. A subsequent autopsy report indicated that he had methamphetamine and amphetamines in his system at the time of his death.

The federal lawsuit was filed in December 2020 by the estate of Manuel Verdugo Gonzalez, his daughter, Stacey Verdugo, and an individual listed as Sacramento Verdugo.

It alleges violations of Manuel Verdugo Gonzalez’s civil rights, as well as wrongful death/negligence, and lists the city of El Centro, officers Singh, Garcia, Meza and Sgt. Valdez, the Rite Aid Corp., and various other unnamed individuals as defendants.

Following the fatal December 2019 incident, Stacey Verdugo had publicly criticized police officers’ response, and faulted county Behavioral Health Services for allegedly not providing her father with adequate services in the days prior to the shooting.

The daughter and estate have retained San Diego-based Alex Coolman as the plaintiff’s attorney. Coolman previously represented the younger Verdugo when she had filed a civil lawsuit in the county Superior Court seeking to compel the Police Department to release officers’ body-worn camera footage of the incident. That lawsuit appears to have been resolved when the department released the camera footage in question in June 2020.

On Feb. 22, attorneys for the city and police filed a motion to have the case dismissed, citing the complaint’s alleged failure to state a claim in connection to the alleged violations. No ruling on the motion to dismiss has been made, court records indicated.

Next
Holtville Police Briefs: May 18-24