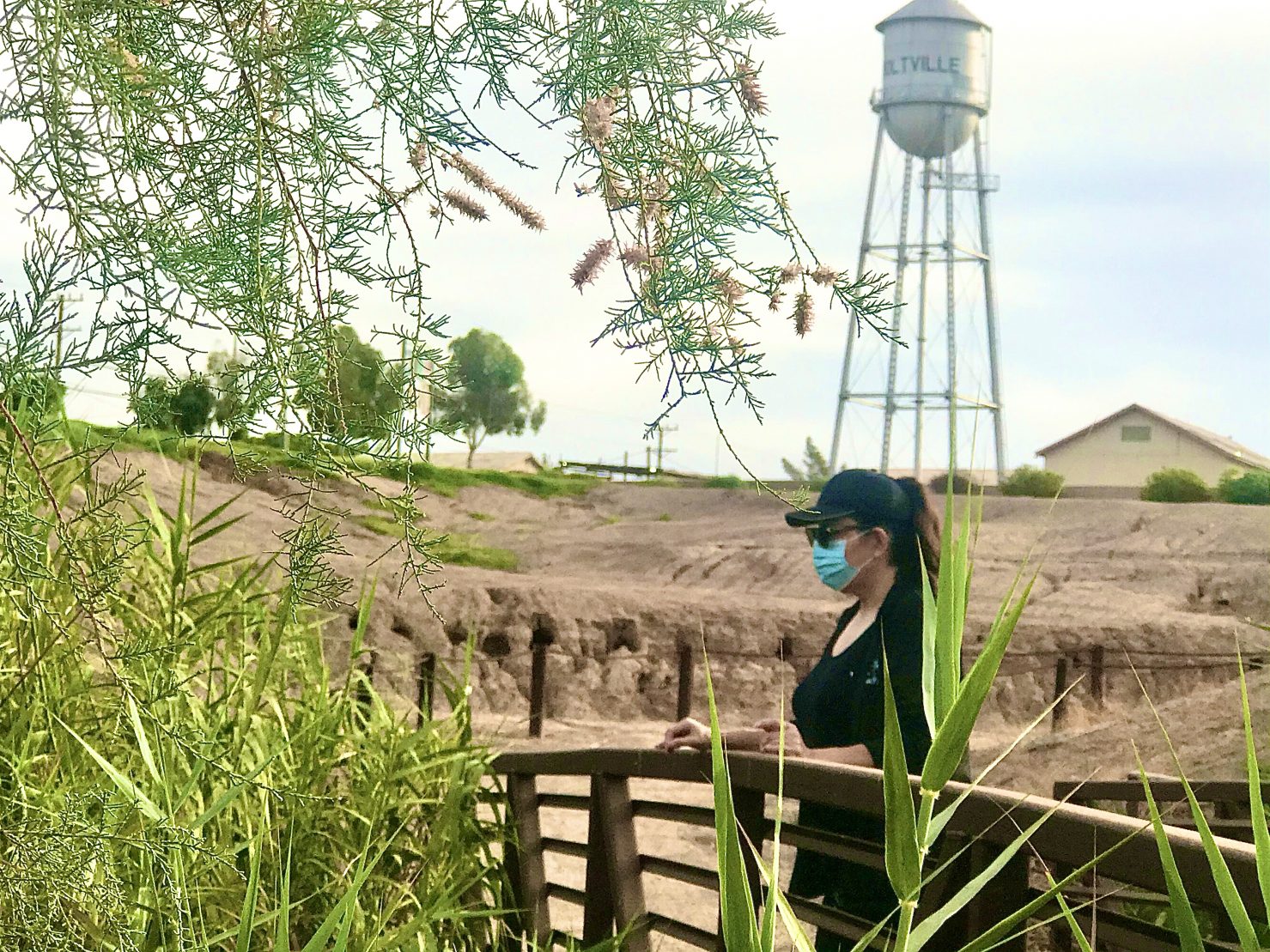 A community member takes in the view of the Alamo River during the third annual “Walk the Trail” event at the Mellinger Trail on Saturday morning, Oct. 24, 2020, in Holtville. | CELESTE ALVAREZ PHOTO
Home
Local News
Share

HOLTVILLE — Construction on the long-awaited Alamo River wetlands project appears to be drawing nearer, following the City Council’s approval of a bid to prepare a geotechnical report for the proposed site.

The authorized $26,450 service agreement with Landmark Geo-Engineers and Geologists calls for the firm to analyze the site’s soil composition and validate the project’s foundation design. It was approved by the City Council during its regular meeting Monday, May 24.

A geotechnical report is required for the wetlands project to have its grading permit application reviewed and approved by the county Public Works Department, the resolution’s backup documents stated.

“Once the grading permit is issued, the city can proceed with the construction phase,” the staff report stated.

The resolution was unanimously approved by a 4-0 vote without any council discussion. Council member Murray Anderson was absent from the May 24 meeting.

The city’s proposed project was made possible by a $2.9 million grant the U.S. Bureau of Reclamation awarded to the city in September 2016. The project has encountered significant delays, prompting the city to request an 18-month extension from the bureau, whose grant included milestone deadlines.

“Staff anticipates receiving approval of the time extension within the next two weeks,” the staff report stated.

Once completed, the project will consist of an artificial 27.5-acre wetlands area on the Alamo River’s southwest overbank north of Zenos Road that would assist in improving the river’s water quality.

The wetland complex will include excavations about 10 feet deep, filled earthen berms about 20 feet high, as well as associated headwall/pipe improvements, according to the resolution’s backup documents.

“The total water surface area is proposed to be 8.8 acres which would hold 53 acre-feet of water and would have a maximum design flow rate of 6 cubic feet per second,” the staff report stated.

The bid by Landmark Geo-Engineers and Geologists, which has offices in El Centro and Palm Desert, was one of two that were submitted to the city in response to its request for proposals.

The requested geotechnical report’s scope of work consists of field exploration, the drilling of borings and laboratory testing of soil.

“The cost is covered by the grant,” said Jeorge Galvan, the city’s contracted city planner. “We won’t have to pay out of pocket.”

Landmark indicated that its work would be completed in three to four weeks, according to the resolution’s backup documents. That timeframe was shorter than the six weeks that the project’s other bidder, El Centro-based Sierra Material Testing and Inspection, indicated it needed to finish. Its bid was for $28,000.

The wetlands project had also recently attracted the attention of the Chico-based nonprofit River Partners, which the City Council agreed to partner with during its May 10 meeting on a proposed habitat restoration project for an estimated milelong segment of the river in and around the wetlands’ site.

Though that proposed project remains in its preliminary stages, city officials previously stated it would supplement the wetlands project as well as the expansion of the Pete Mellinger trail.

During the council’s meeting on Monday, it also unanimously approved a permit for a professional fireworks display that was requested by Holtville High School for its senior graduation ceremony scheduled for Thursday, June 3, at the campus’ football field.

Next
Woman with Knife Prompts Lockdown at Heber School