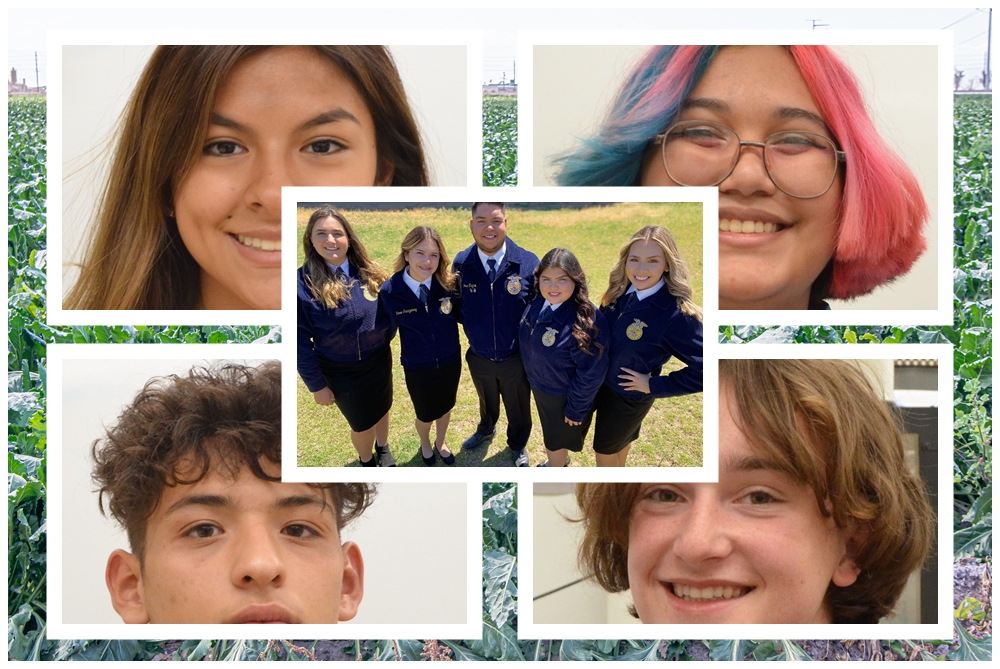 Various members of Holtville High’s FFA make up a collage, which also features the winners at the 2020 California FFA Agriscience Fair. See their individual photos below for names. | COURTESY PHOTOS
Home
Agriculture
In AgricultureEducationFeatured Stories

HOLTVILLE — Holtville High sophomore Daniel Ledesma is no stranger to optimal engine performance. The 16-year-old said he has been racing dirt bikes for the past six years and was part of a four-person team that competed successfully at the Baja 500 last year.

This year, his knowledge of combustible engines helped him and his classmate, Jasmine Castro, earn top honors in the power, structural and technical systems category during the 2020 California FFA Agriscience Fair.

With the pair’s first-place division 4 win at the state level, Daniel and Jasmine are now scheduled to compete at the agriscience fair at the National FFA Convention and Expo on Oct. 27-30 in Indianapolis.

After some four months of comparative tests and logbook entries, Daniel and Jasmine compiled a written report that highlighted their findings.

“The fuel additive keeps the spark plug cleaner and makes the throttle responds faster,” Daniel said on Thursday, May 20.

Nor were the pair the only team from Holtville High to place first in an event at the agriscience fair, the winners of which were announced during the 93rd annual California FFA Leadership Conference, held virtually from May 14-16.

Viking freshmen Monserath Felix and Gannon Strahm also earned a first-place win in the food-systems category, division 4, for their study of whether burning crop stubble contributes to the germination and plant growth in a successive crop of alfalfa.

After about five months of research and experimentation, they were able to conclude that the burned plant matter deposited nutrients in the topsoil which benefitted the successive crop of alfalfa.

“It was a pretty interesting and difficult task,” Monserath, 15, said about her team’s agriscience project.

The idea to do such a project was partly influenced by the fact that Gannon’s father is a farmer who utilizes the widespread practice of burning the plant stubble that is left after alfalfa is harvested.

Though his father has utilized the practice for some time, Gannon said his father had told him that he was uncertain about whether the burned plant matter promoted crop germination and growth.

“He told me he really had no idea, he just did what he had to do,” Gannon said.

The duo’s win in the agriscience fair was a surprise for both of them. To help improve their chances of winning at the national level, the team is considering revising and resubmitting their project’s written report.

“We might tweak it,” Monserath said, “make it a little more professional.”

Aside from the campus’ two first-place-winning teams, the Holtville High FFA chapter itself placed fourth in novice overall winners at the agriscience fair.

Other FFA chapter members who were recognized at the state level during the virtual event included Melany Lopez and Jose Devoux, who placed second in the division 6 social science category. In the power, structural and technical systems category, division 6, Ashley Meza and Jose Reyna took third place.

Many additional members of Holtville High’s FFA chapter were recognized as well during the organization’s annual banquet on May 19 at the campus gymnasium.

Aside from recognizing individual members for their respective agriscience proficiencies and leadership and career development events, the awards banquet provided club members and their supporters an opportunity to meet in person instead of virtually, as they did last year because of COVID-19 restrictions.

“It was nice coming back in-person and being able to see so many people come together,” said club president and senior Melany Lopez on Thursday, May 19.

Holtville High FFA vice president and senior Leonela “Leo” Gonzalez said she credits Melany and her siblings for her own involvement in FFA. Gonzalez said she recalled initially feeling terrified attending high school as a freshman, but soon found a welcome home in the campus’ FFA chapter.

“It has motivated me to step out of my comfort zone and do things that I never thought would be possible,” Gonzalez, 18, said on May 19. “The sense of family and unity that we have in FFA is what motivated me to join.”

Fellow FFA officer Jose Reyna said that his participation in FFA, as well as serving as an officer for the campus’ chapter, has helped develop his personal, academic and career aspirations.

“It’s a really great organization that helps you reach your potential,” Reyna, 18, said on May 19.

Club member and high school junior Arianna Venegas said her interest in the agriculture industry dated back to her participation in 4-H and further bloomed when she joined the Holtville High FFA chapter as a sophomore.

“I didn’t know there was anything like that before until I started doing it,” said Arianna, 16, on May 19. “From there I always wanted to take a step forward and do more for FFA and be more involved.”

Next
Victory is a Family Affair for Salais