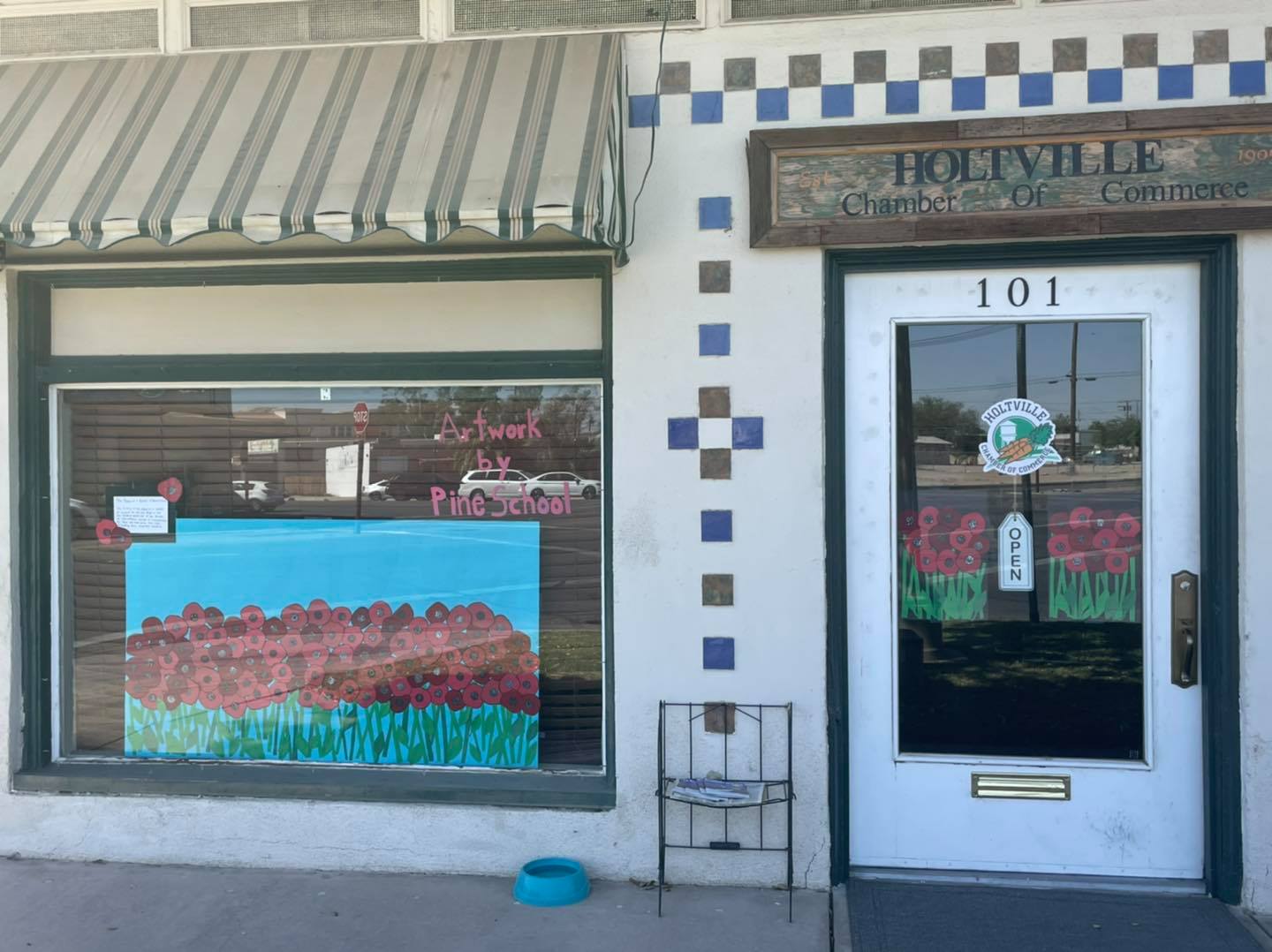 Artwork created by Pine School students featuring red poppies in commemoration of National Poppy Day are displayed at the Holtville Chamber of Commerce. The red poppies pay tribute to armed service members who have died in combat. The red poppy is also symbolic of Memorial Day, which is Monday, May 31. | COURTESY PHOTOS
Home
Featured Stories
In Featured StoriesRegional News

IMPERIAL COUNTY – Multiple Memorial Day events are scheduled for Monday, May 31 throughout the Imperial Valley in honor of local armed service members who have died in the service of the nation.

Many of the events will take place in the morning, starting with an 8:30 a.m. ceremony at Holt Park in Holtville that is being jointly hosted by the American Legion auxiliary Bradley-Keffer Unit 138 and the city of Holtville.

In El Centro, the Veterans of Foreign Wars Post 9305 will be hosting two separate events.

The first one gets underway at 9 a.m. at Evergreen Cemetery and will include a presentation, rifle salute and moment of prayer, said Thomas Henderson, post adjutant.

The VFW Post 9305 will also host a similar ceremony at 10 a.m. at the Veterans Memorial at Bucklin Park. During that ceremony, the names of service members who have had their names added to the wall will be read aloud, Henderson said. Attendees are encouraged to bring their own chairs.

In Brawley, American Legion Post 60 will be hosting its ninth annual Memorial Day Walk from Westmorland to Riverview Cemetery in Brawley. Those interested in participating in the walk are asked to meet at 6:45 a.m. at the American Legion, 509 G St., Brawley.

The ceremony at Riverview Cemetery is scheduled to get underway about 9 a.m., said Ernesto Mariscal, Army veteran and Post 60 member.

In Calexico, the American Legion Goree-Lake Post 90 will put flags out at Mountain View Cemetery in Calexico at 6:30 a.m. Monday. But there will be no formal ceremony this year, according to members.

Across the United States, Memorial Day is observed annually on the last Monday in May and pays tribute to armed services members who died in the line of service. The federal holiday was initially known as Decoration Day for its tradition of decorating the graves of soldiers.

Included in this story is the colorful artwork of Pine School students in Holtville, who painted and crafted red poppies for National Poppy Day, which is celebrated by the American Legion on Friday, May 28. The red poppy pays tribute to service members who have died in combat, the direct tie to Memorial Day. To read a recent feature on red poppies and the Holtville American Legion auxiliary, click here.