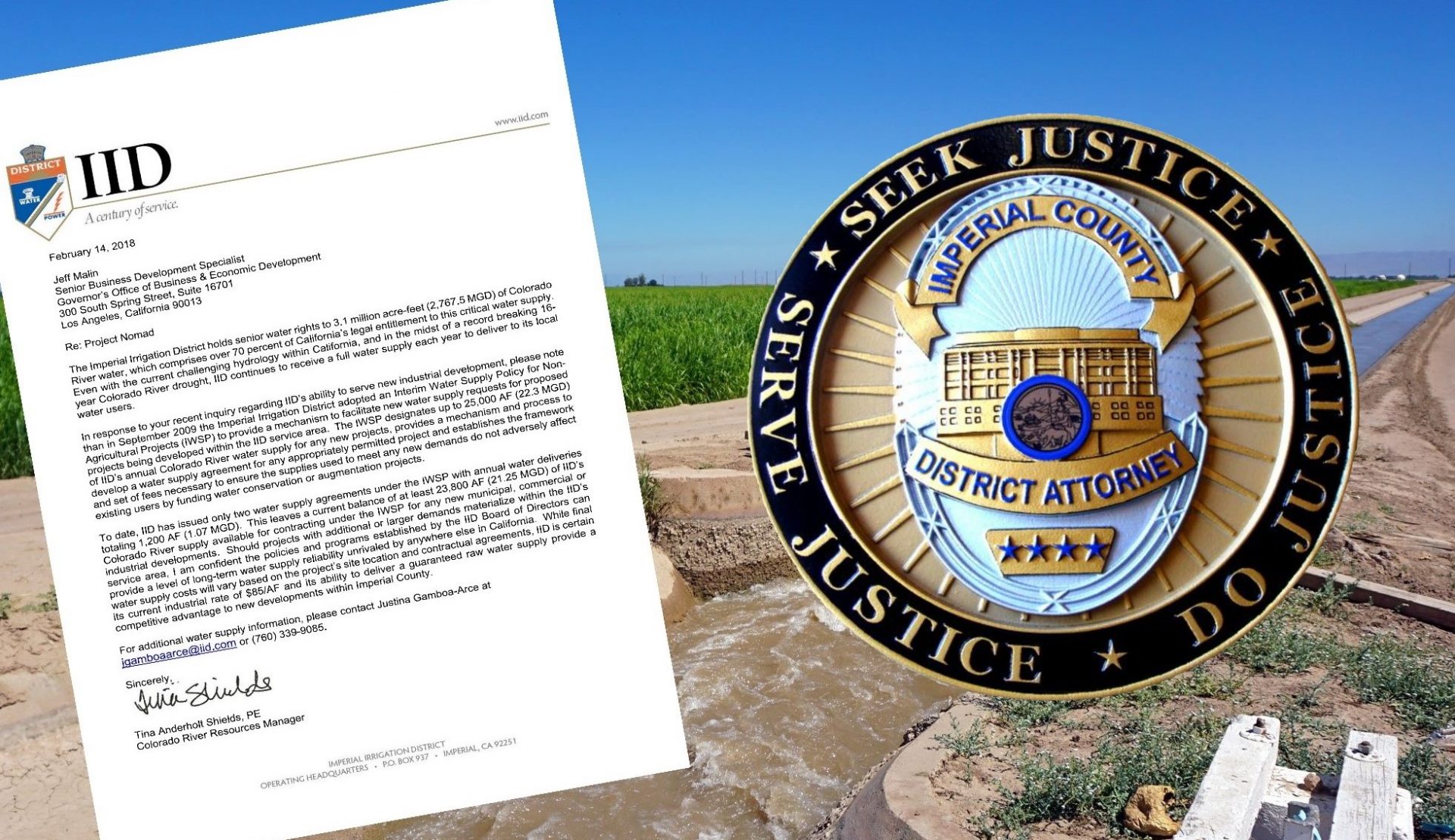 A copy of a letter from February 2018 is shown that Imperial Irrigation District officials say used a forged signature of the district’s water manager and district letterhead by an Imperial Valley Economic Development Corp. official. Now, the Imperial County District Attorney is looking into the issue. | CALEXICO CHRONICLE/HOLTVILLE TRIBUNE GRAPHIC
In Regional News

The Imperial County District Attorney has launched a sweeping investigation of the Imperial Valley Economic Development Corp. following allegations that a top IVEDC official fabricated a letter from the Imperial Irrigation District.

The DA’s office is also trying to determine whether IVEDC letters from other government agencies were fabricated as well.

“This is a multi-faceted investigation,” District Attorney Gilbert Otero said. “We don’t know if there was one letter or many letters. Maybe they submitted other letters on behalf of the county. I’m not tying myself to one narrow thing.”

The DA’s office will file charges against individuals and entities involved if it determines that crimes were committed, Otero added.

IVEDC’s Sean Wilcock is accused of forging the signature of IID’s water manager, Tina Shields, on a letter to a specialist in the governor’s office seeking information about the district’s water rights and the availability of water for a potential industrial project in Imperial County.

Wilcock is vice president of business development and services for IVEDC. He’s been with the agency for at least 10 years, according to his LinkedIn profile.

The IID sent a strongly worded letter to the IVEDC on Tuesday, May 11, and the district suspended payment on $100,000 in funding to the economic development agency pending resolution of the matter.

Imperial County officials are alarmed as well, and they too have written to the IVEDC seeking clarification and copies of correspondence it sourced from the county, Imperial County Supervisor Jesus Escobar said.

“The allegation is that there was a misrepresentation of documents presented by the IVEDC on IID letterhead, signed by IID executives,” Escobar said. “We want to make sure that type of situation did not occur with the county.”

IID General Manager Henry Martinez did not mince words in a letter sent to IVEDC President and Chief Executive Officer Tim Kelley on May 11 that was first obtained by the Calexico Chronicle.

“The problem arose when Mr. Wilcock forwarded a letter he indicated was previously provided by Ms. Shields on behalf of IID, suggesting that an update of this letter would meet his needs,” Martinez stated.

In the letter the district requested the IVEDC review and verify the authenticity of all communication the economic development agency sourced from the district, and forward that material to the IID. The IVEDC reportedly forwarded up to a dozen letters.

Martinez declined to say how many letters there were or what they contained.

“There was more than one letter,” Martinez said. “Thumbing through them, they all had Tina’s signature.”

IVEDC board chairperson Douglas Dahm addressed the matter before the IID board went into closed session on the morning of May 18.

“While our preliminary reviews show there was no wrongdoing, the public trust in our business is critical, and that is why we are going above and beyond to ensure we are transparent and can keep the public trust,” Dahm said.

Dahm was later asked why the IVEDC engaged an outside certified public accountant and a “technical firm,” but he declined to answer, saying that it was a confidential internal matter.

Martinez said that the IID board discussed the matter in closed session on May 18 but did not take any action. When asked if or when the board planned to take up the matter in open session, he said that they were awaiting the outcome of the investigation, and payments to the IVEDC were suspended in the meantime.

When the district went into open session after 1 p.m. May 18, the lone mention during public comments came from El Centro resident Peter Rodriguez.

“I, as a ratepayer, am in full support of an investigation and not a suspension, but a termination of the $100,000 and ask the whole board to stand behind that, because if you don’t, then you are part of the problem,” Rodriguez said. “This is hurting business, this is hurting people who want to trust and work with the IID. Anyone involved in this should resign.”

IVEDC’s Kelley told the Calexico Chronicle on May 12 that the letter in question was never mailed, and that the agency was not misrepresenting the IID. IVEDC was investigating the matter and had not found any evidence that Wilcock or other IVEDC employees had fabricated other IID documents.

“This letter that is in this document did not go out. This letter was sent from Sean Wilcock to IID as a sample for them to review and update,” Kelley said. “The mistake Sean made was not putting draft across it.”

Next
GUEST COLUMN: Coachella Valley: Should IID Stay or Should IID Go?