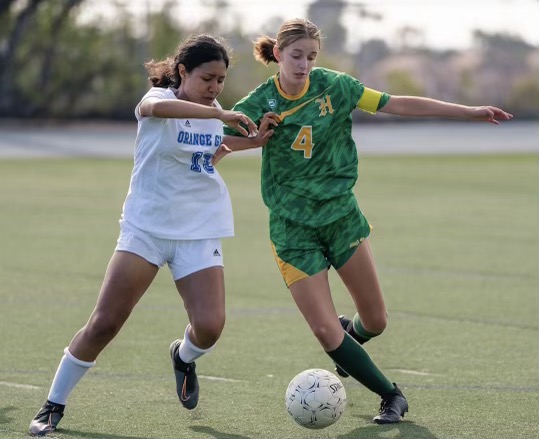 CHULA VISTA — Holtville High School’s girls soccer team came up just short of making history as the first to win a CIF-San Diego Section title when the Vikings lost, 3-2, to Orange Glen High of Escondido at Eastlake High here in the Division V championship match on Friday, May 28.

Holtville got off to a terrible start in the game, giving up goals in the opening minute of the match and in the 16th minute to Orange Glen senior Valeria Alcantar. The opening goal was just misread by the Vikings’ goalkeeper and seemed to swing the momentum in the Patriots’ favor.

“We had a huge turnout of fans and maybe the girls were feeling the pressure,” said Sadie Ming, Holtville’s first-year head coach. “A playoff game is completely different energy than a regular season game.”

Orange Glen added to its lead in the 34th minute of the first half when the Holtville keeper had control of the ball but it was jarred loose by a Patriots’ player who then turned and fired it into the net for a 3-0 Orange Glen lead.

“At that point I was reminding them there was a lot of time left,” Ming said. “I was trying to keep their energy at the right level.”

After playing most of the opening half on their defensive side of the field, the Vikings started to make long runs and push the ball forward late in the half.

In the final minute of the half, junior midfielder Lesley Sandoval took a shot that skipped past the Patriots’ keeper and into the net to pull the Vikings to 3-1 at halftime.

The goal lifted the spirits of the Desert League champions and the second half was spent mostly on the attack for the Vikings. Senior Amanda Strahm was able to get Holtville closer with a finishing shot midway through the second half to pull her team within one at 3-2.

The final minutes saw the Vikings continue to mount pressure and take shots but they weren’t able to get the equalizer and send the game to overtime.

“We had a lot of close opportunities at that point,” Ming said. “We had quite a few breakaways and we’d just miss the shot wide or a defender would get there at the last minute to break it up.”

It is the second Division V championship for the Patriots in the last five years while the appearance in the championship game was the first for Holtville in school history.