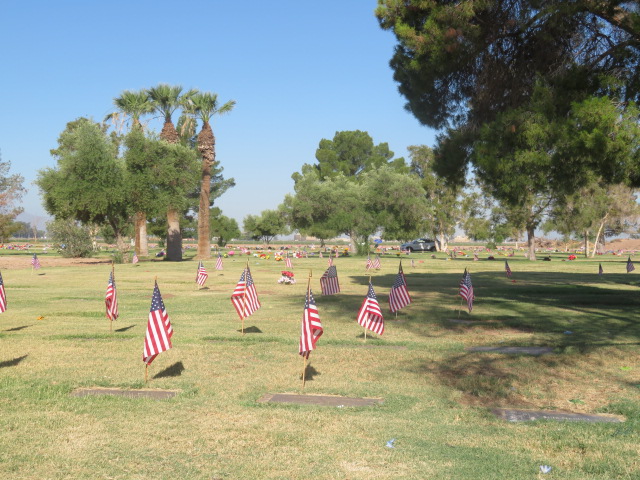 Miniature American flags were put out at the gravesites of U.S. military veterans in honor of Memorial Day at Calexico’s Mountain View Cemetery by surviving veterans and volunteers with the Calexico Baja Runners on Monday morning, May 31. | CHARLIE M. ZAMARRIPA PHOTO
In Regional News

CALEXICO — Fernando Martinez says he tries to make it out to Mountain View Cemetery every year to clean up his great-grandmother’s uncle’s final resting place.

On Monday morning, May 31, the 36-year-old Martinez cut overhanging shoots of grass by hand, then poured water from his bottled-water container and used a hand scrub brush to bring out the name of his uncle, Pfc. Salvador Guilin, a World War II veteran.

After 25 to 30 minutes, the late Guilin, a member of U.S. Army Infantry Division 88, had a seemingly brand-new grave marker.

Martinez was one of a handful of cemetery visitors who enjoyed the early-morning breeze to honor their relatives on this Memorial Day. He took one short break, to salute the new American flag that had been brought by the proprietor of the cemetery, Kirk Hems, a third-generation mortician.

Calexico veterans from all branches of the armed services and a few civilians from the nonprofit group, Calexico Baja Runners, have been placing small U.S. flags on military veterans’ grave markers at Mountain View Cemetery for more than 30 years.

Early Monday morning, as the volunteers arrived to plant the flags, the longest-serving member of the Baja Runners, club treasurer Arnold Brown, a U.S. Marine Corps veteran who took part in the bloodiest battle of the Vietnam War, the Tet Offensive, and fellow Marine Javier Pacheco raised our nation’s flag to half-staff in a designated area of the cemetery.

This was around 6:30 a.m. and the planting of the flags would be the sum of the day’s formal efforts at the Calexico cemetery, as what had traditionally been a mid-morning Memorial Day service did not happen this year.

Maribel Gorosave, post adjutant for the American Legion Goree-Lake Post in Calexico, told the Calexico Chronicle on Friday, May 28 that the decision was made to only plant flags this year primarily due to the aging membership of the post.

A larger mid-morning service was held at Veterans Memorial at El Centro’s Bucklin Park by the Veterans of Foreign Wars Post 9305.

Meanwhile, Brown explained that while the COVID-19 pandemic had drastically cut the number of volunteers on hand to plant the flags, the assembled group was able to complete the task in about two to three hours.

A sentiment shared by the group was that the whole point of Memorial Day was not only to honor the wartime dead, but all veterans who have passed away. In a typical year, anywhere from 30 to 40 volunteers of all walks of life would have participated, organizers said.

Over the years, Boy Scout and Girl Scout troops had joined in the proceedings, as well as high school and elementary students. That had not been the case for many years, so Brown said the Baja Runners had taken over the duties themselves.

As the vets and volunteers gathered Monday morning, each branch of the represented military picked on each other, as is a typically unwritten rule. Yet in their moments of levity, the brotherhood and sisterhood of every veteran was honored by the volunteers to ensure all were honored equally.

The older group members said they took great pleasure in seeing young and old volunteers placing flags on the gravesites. They said they consider it a civic duty to honor and show respect to every single military veteran throughout the world, especially those from the Imperial Valley and Calexico.

Brown mentioned that although he plans to perform his duty for at least another 30-plus years, he knows that he will not be able to do this forever. His said he hopes more Calexicans make time to start showing up to carry on this tradition of honoring our fallen heroes.

Previous
Piña’s Hoop Dreams to Play Out in Portugal