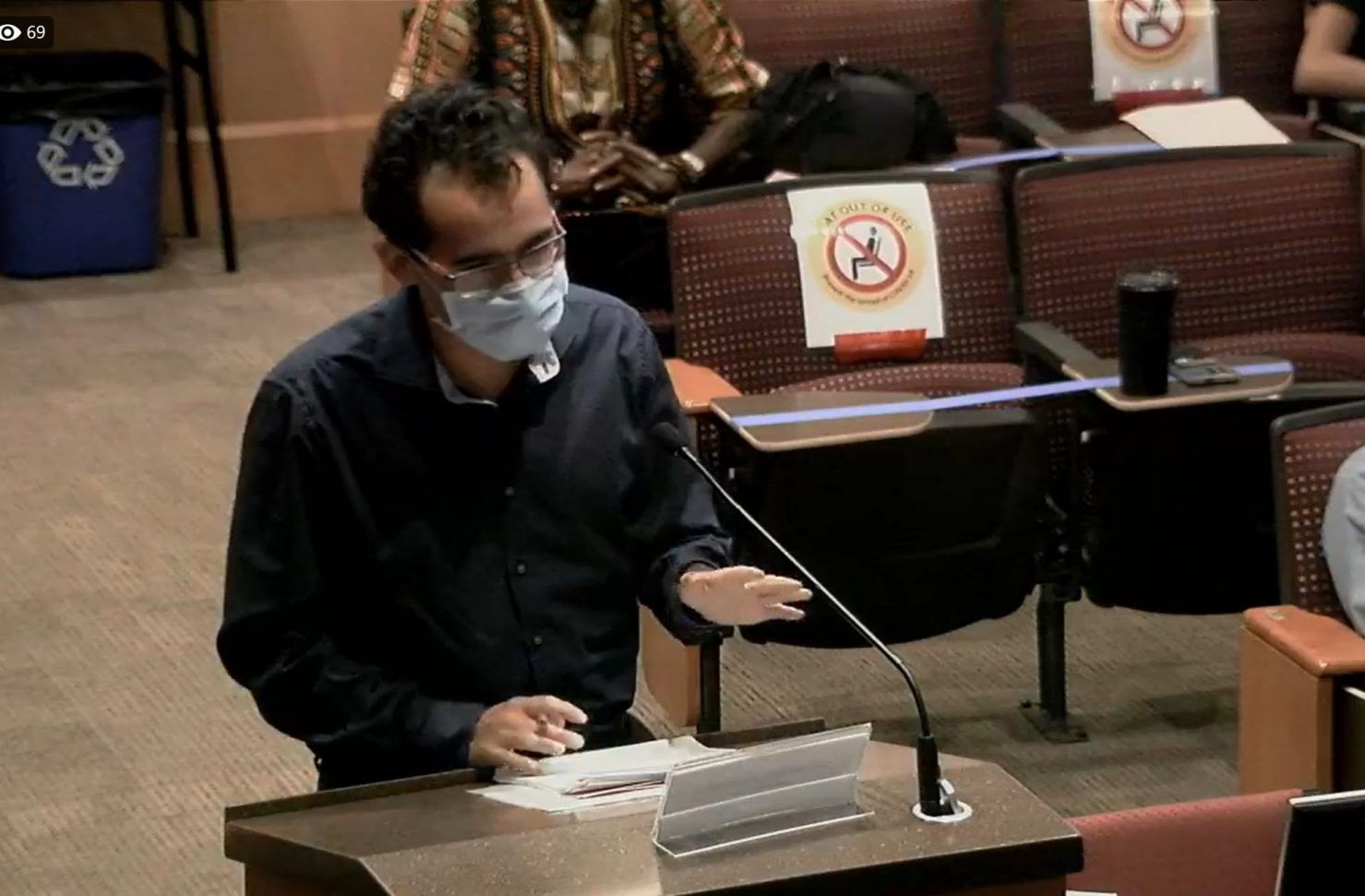 EL CENTRO — Raul Ureña’s journey to the county seat was more like a trip to the lion’s den when the controversial Calexico City Council member was invited to answer for his comments about excessive force among El Centro police officers.

As was expected, the experience ended badly for Ureña, who left the El Centro City Council meeting on Tuesday night, June 1 offended and upset that he was not given the opportunity to read all or part of his lengthy rebuttal clarifying yet continuing to double-down on his insistence that structural excessive force issues exist on the El Centro Police Department.

The freshman council member in Calexico seemed surprised that he was treated tersely and afforded only four and half minutes to speak during the public comments portion at the onset of the meeting, even with his stated intellectual disability that he told El Centro officials afforded him one and half times the standard allotted length to speak.

Clearly flustered, annoyed, and offended throughout the four and half minutes he was up at the lectern, as time ticked down, Ureña let his frustration crack his up-to-that-moment calm veneer.

“I just can’t get over the fact these are the conditions of the discussion, I mean I can’t even get to the first point here because it would take me five minutes to try to explain the data,” he said. “When I got the invitation from yourself, Mayor Walker, you said you wanted to have a conversation in full transparency, in full transparency to promptly be here at 6 p.m.

“I’m promptly here at 6 p.m. and I’m being shown this disrespect of four minutes to try to squeeze in police brutality,” he said as his time ran out, using much of the first part of the discussion on prefatory comments. “You know what, you did not want to have this conversation.”

“Every member of the El Centro City Council had a meeting scheduled with Mr. Ureña that was cancelled. Every single one of us accepted the opportunity to have a full and transparent conversation and the meetings were cancelled,” Walker said.

She added he was invited and put on the agenda during public comments to provide substantive information on the “tracking” he had done regarding instances of use of force, and she thanked him for providing the council with three instances.

What she didn’t say at that point but had mentioned in an earlier interview with this newspaper is, Ureña, the Imperial Valley chapter of Black Lives Matter, the Imperial Valley Social Justice Committee, and the local office of the American Civil Liberties Union canceled the meetings because the city had wanted to include Police Chief Brian Johnson in on the meetings.

The parameters of Ureña’s visit Tuesday were detailed in the letter that drew him there in the first place, which Walker sent to him and his fellow council members and the city clerk on Monday afternoon, May 24 in response to statements Ureña made during a Calexico City Council meeting on May 5 during a 20-minute discussion on state Senate Bill 2, a piece of legislation that would allow for the certification and decertification of police officers in the state if passed and signed into law.

During about 20 seconds during the tail end of the discussion May 5, Ureña made his now infamous statements about systemic police abuses that have occurred at the El Centro and Imperial police departments and the California Highway Patrol.

The statements evoked such swift and angry reaction from city and police officials in both cities that Imperial Mayor Karin Eugenio and Walker issued letters to the Calexico policymaker. Walker’s letter came with the invitation for Ureña to bring forth proof of instances of abuse in what Ureña had said on May 5 was the last “five years,” a time frame both departments denied vehemently.

Ureña himself told this newspaper that he misspoke on the timing, but in his 1,900-clarification/rebuttal, he redirects that ongoing abuses are an issue for the departments. This newspaper ran Ureña’s entire response online several hours before Tuesday’s meeting, and El Centro officials acknowledged they had received a copy as well.

Ureña’s considerably shorter-then-planned appearance did not sit well with Ureña or those who accompanied him, including Hilton Smith of Black Lives Matter and Marlene Thomas, founder and president of the Social Justice Committee. Both spoke and both were summarily cut off after two minutes.

As a result, Ureña and the Social Justice Committee and Black Lives Matter were to stage a press conference on the steps of the Imperial County Courthouse in El Centro on Wednesday afternoon, June 2, as this newspaper was going to press.

There, Ureña was deliver the 1,900-word rebuttal he had planned for the council meeting. It wasn’t clear if he also intended to show a PowerPoint presentation that El Centro City Attorney Elizabeth Martyn Evans told him he could not show during the meeting because it had not been vetted beforehand.

As Ureña’s appearance was unfolding June 1, Imperial’s mayor had seen the same response to the letters.

“I appreciate Urena’s acknowledgment and appreciation contrasted to the other letters. However, accurate time frames are essential here. You cannot randomly select five-year increments when it’s convenient. He listed deaths of individuals, but not the dates of those deaths,” Eugenio said on Tuesday evening.

“That is the point! In the last five years, we hired a new chief of police, and have instituted many mitigating efforts to ensure we have a solid police department. The deaths he listed did not occur in the last five years. I, too, oppose police brutality and misconduct. But there’s great power in truth and accuracy. Use it,” she said.

When Ureña’s own city council meets in Calexico on Wednesday night, June 2, it is expected that similar to Tuesday night, there will be those with and against him. While the issue is not on the Calexico agenda, it was expected to be a topic of public comments.

In El Centro, two members of the public spoke on Ureña’s side if not on his behalf, and a few others spoke out against his comments.

“Thanks to you, publicly, for following through on the appalling statements that would come from an elected official attacking the city, neighboring cities,” Imperial resident Sylvia Preciado Platero said to the El Centro council, referring to a statement Ureña made to this newspaper about El Centro police being paid well when they helped Calexico police cover shifts when several officers were out with COVID late last year.

Calexico resident Patricia Ureña, no relation to Raul, commented that she wants to see him spend his time taking care of the concerns of Calexico residents rather than mix it up with other cities.

Yet Raul Ureña was not without his support. Calexico resident Ismael Arvizu made the trip to El Centro, where he was frank with the city, telling the council that racism exists, police brutality exists, and the defensive posture the city has taken with Ureña is telling.

“This is what worries me, how defensive you guys are, how scared this conflict, this talk, this opinion” has you, Arvizu said. “I love police officers. I saw Chalo (Calexico Police Chief Gonzalo Gerardo) … when I was coming to El Centro and he said, hey, be careful … but the police is a system that comes from racism, they protect property, they protect profit.

“And the police obey the law, but sometimes they act like executioners. They kill,” Arvizu shouted for emphasis, “when they’re not supposed to kill.”

Smith and Thomas both spoke briefly as well. Smith spoke of the systemic excessive force problems that exist in Imperial County, and Thomas grew frustrated as she believed the issue that had been blown out of proportion.

The issue was put to bed with more comments from the El Centro council and Chief Johnson, all of whom said many of the things they said at the previous council meeting, which was reported at length in a past story.

Next
Communities Come Together to Honor the Fallen