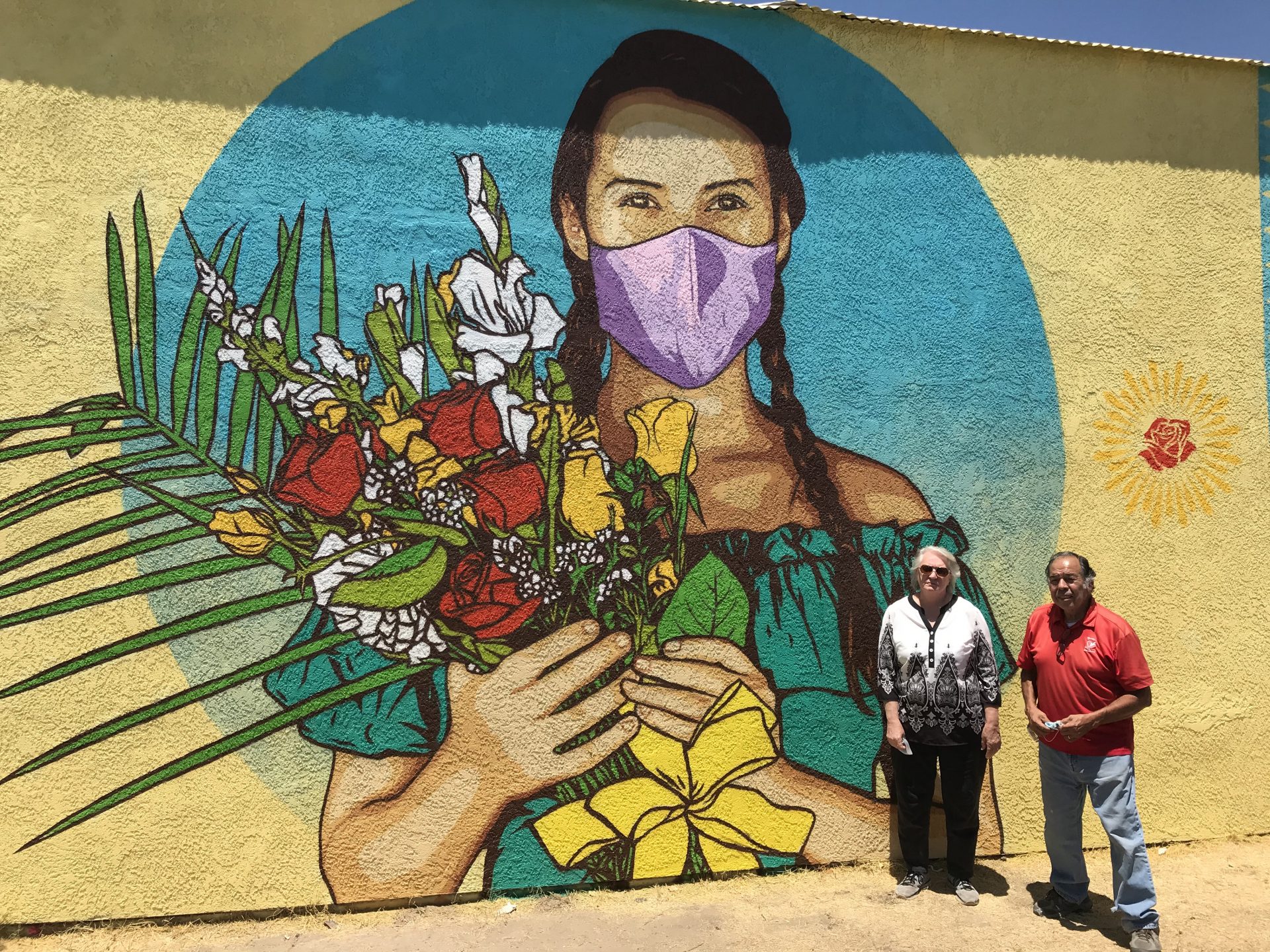 Cynthia and Rick Derma stand next the completed COVID-19 memorial mural on the wall outside the location of the former Cynthia’s Flower Connection at 739 N. Imperial Ave. in El Centro on Sunday afternoon, May 29. The mural was commissioned by the state and painted by Boyle Heights artist and former El Centro resident Ernesto Yerena Montejano. | RICHARD MONTENEGRO BROWN PHOTO
In COVID-19Regional News

EL CENTRO — Albeit under tragic circumstances, Cynthia and Rick Derma have done large volumes of flowers through their shop during the pandemic, providing arrangements for the hundreds upon hundreds of local lives lost to COVID.

Yet the disease nearly resulted in their own deaths, and to this day, some 10 months after this married couple contracted COVID-19, the namesake of Cynthia’s Flower Connection said she and Rick are still feeling the effects of what has been a long road to recovery.

And she wonders whether those effects will ever subside, for her at least.

“We count our blessings that we made it through. It was pretty rough, pretty rough. We both had it pretty bad,” Cynthia Derma said during a phone interview on Friday, May 28. “I still feel like I’m in a brain fog. I used to be able to remember all my appointments and everything. Now I have to write them down.”

Seeing a huge state-commissioned mural dedicated to the 730 local lives lost to the coronavirus — and the hope and promise of a better day to come — painted on the wall outside the nine-year home of her flower shop comes with meaning on many fronts.

California officials, the artist in charge of the piece nor the former El Centro man who acted as a go-between for all parties had any idea the Dermas themselves had a direct connection to COVID other than the obvious tie-in of funeral and celebratory flowers, themes expressed in the design of the mural that graces a 13-foot by 75-foot stucco wall facing the parking lot of 739 N. Imperial Ave.

Boyle Heights artist and El Centro native Ernesto Yerena Montejano, who was commissioned by the California Department of Public Health to design and paint the mural, had spoken to Derma, but she had only explained how the business was impacted by COVID.

“The flower shop, which the mural is on, they told me that they had done all or a lot of the funeral bouquets back there, and they were telling me they’re one of the few flower shops in the Valley,” Yerena said during an interview on Saturday night, May 29, as he took a short break on his final full day of painting. “They pointed out a funeral bouquet. They were like, we made about 1,000 of those.”

The same sunny Sunday afternoon, May 30, that Cynthia and Rick Derma stopped by the building to take a photo in front of the finished product, they were working on moving into their new location at 1045 N. Imperial Ave., next to the Ace Hardware store.

Personally, she said she was sad to go, something that could not be avoided, Derma said. She added that all involved were told the building, which she never owned and was only a tenant, was in escrow back in February when David Varela contacted her on behalf of the Department of Public Health’s “Your Actions Save Lives” public art awareness campaign.

Still, Derma said she had hoped the escrow would fall through. What she did not expect was that she would be forced to move out so quickly, by June 1.

Although the name of the owner of the building was not available, it is believed plans are under way to turn the site into a cannabis dispensary. The address is listed as a site of one of 13 pending applications for cannabis dispensaries in the city, according to information on the El Centro Community Development Department’s subsection webpage on cannabis. Norma Villicaña, community development director, said none of the listed applications have yet been approved by the city.

Despite it no longer being her place of business, that did not affect how Derma feels about the mural and what it means for her, and ultimately, for what this county has had to endure.

“I just hope that the mural will be a reminder that we’re not out of the woods, but we’re getting there. We just need to be cautious of what we’re doing and our surroundings,” she said, adding it’s a good message to promote continued vaccinations and mindfulness of potential flare-ups in cases of the disease.

“It’s heartbreaking to see the families that have suffered so much with this, not even being able to say goodbye to their relatives,” Derma added. “I’m hoping whoever the new people that do come in (to the building) will keep it up. It’s a reminder of what we really need to do and count our blessings that we are alive.”

Next
COVID Mural A Mass Memorial