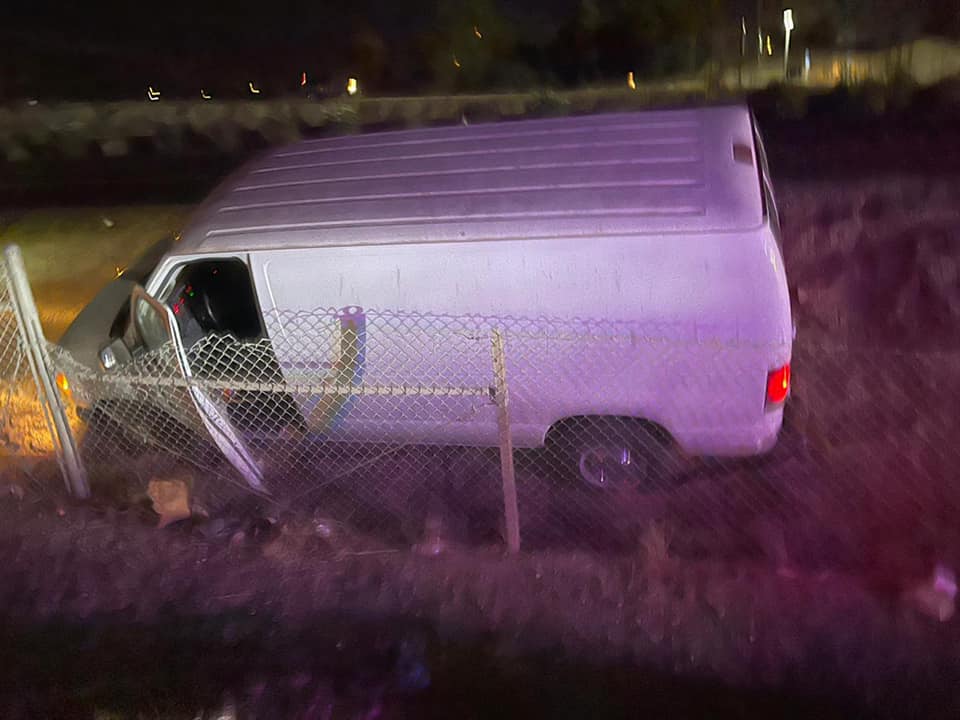 A white van that was reportedly involved in an attempted kidnapping and that evaded police is shown after it crashed into a fence line at Imperial Avenue West and Vernardo Drive in Calexico. The occupants ran from the van and all of them have so far evaded capture. | COURTESY PHOTO
Home
Public Safety
In Public Safety

A Man Police Later Identified as Detron Williams is Being Sought in Connection with the Attempted Crime. Two Others Were Reportedly Involved.

CALEXICO — A man identified as Detron Lee Williams is being sought in connection with an attempted kidnapping and for evading police following an incident on Wednesday night, June 2 that started in the Food 4 Less parking lot in Calexico, according to Calexico police.

Williams nor two other men who were reportedly in the van with Williams have been found and Calexico police are asking for the public’s assistance in the case, a press release from the department states.

The 41-year-old Williams is described as being an African American male with black short hair or bald, dark eyes, standing 5 feet 11 inches tall and weighing 260 to 280 pounds, according to Calexico police.

Photos of the van and the license plate, which Calexico police stated was taken off a stolen vehicle out of San Diego, started being shared on social media within a few hours after the 8:30 p.m. incident was reported.

The mother of the attempted kidnapping victim reported the attempted crime to 911 as the mother was driving to Food 4 Less at 109 W. Birch St./Highway 98, where her daughter had called her to say a man in a white van was following her as she was leaving the store with her groceries and heading to her vehicle, according to the press release.

“As the female victim got closer to her parked vehicle while pushing her shopping cart, she saw the van park two stalls next to her. She saw the suspect get out of the van, and she went into her car to call her mother to report a suspicious van was following her,” the release continued.

Police said the female victim left her groceries outside in the shopping cart in fear, and that’s when she called her mother.

As police were interviewing the woman, the mother told police she witnessed the van leave the area in a northerly direction.

“A Calexico police officer gave chase, and the van failed to yield to police lights and sirens,” according to police. “The driver lost control of the van and collided with a fence line on Imperial Avenue West and Vernardo Drive.”

The suspect, who was later identified through the police investigation as Detron Williams, was seen running from the van. He crossed all the lanes of Highway 111 heading east and into the Hems Bros. Mortuary parking lot at 1820 Imperial Ave.

Police have since been unable to locate Williams or the two other unidentified occupants of the van.

Apparently, the license plates did not belong to the van and the plates were reported stolen from San Diego, registered to a P.O. Box, according to police.

The van was stored for processing and is in police custody.

The case remains open as police officers are following up on leads. Anyone with information on the case or about Detron Williams is being asked to contact the Calexico Police Department at 760-768-2140, extension 0. Ask for Sgt. M. Ceja, case No. 21-08360.

Next
Southwest Grads Give Life Lessons