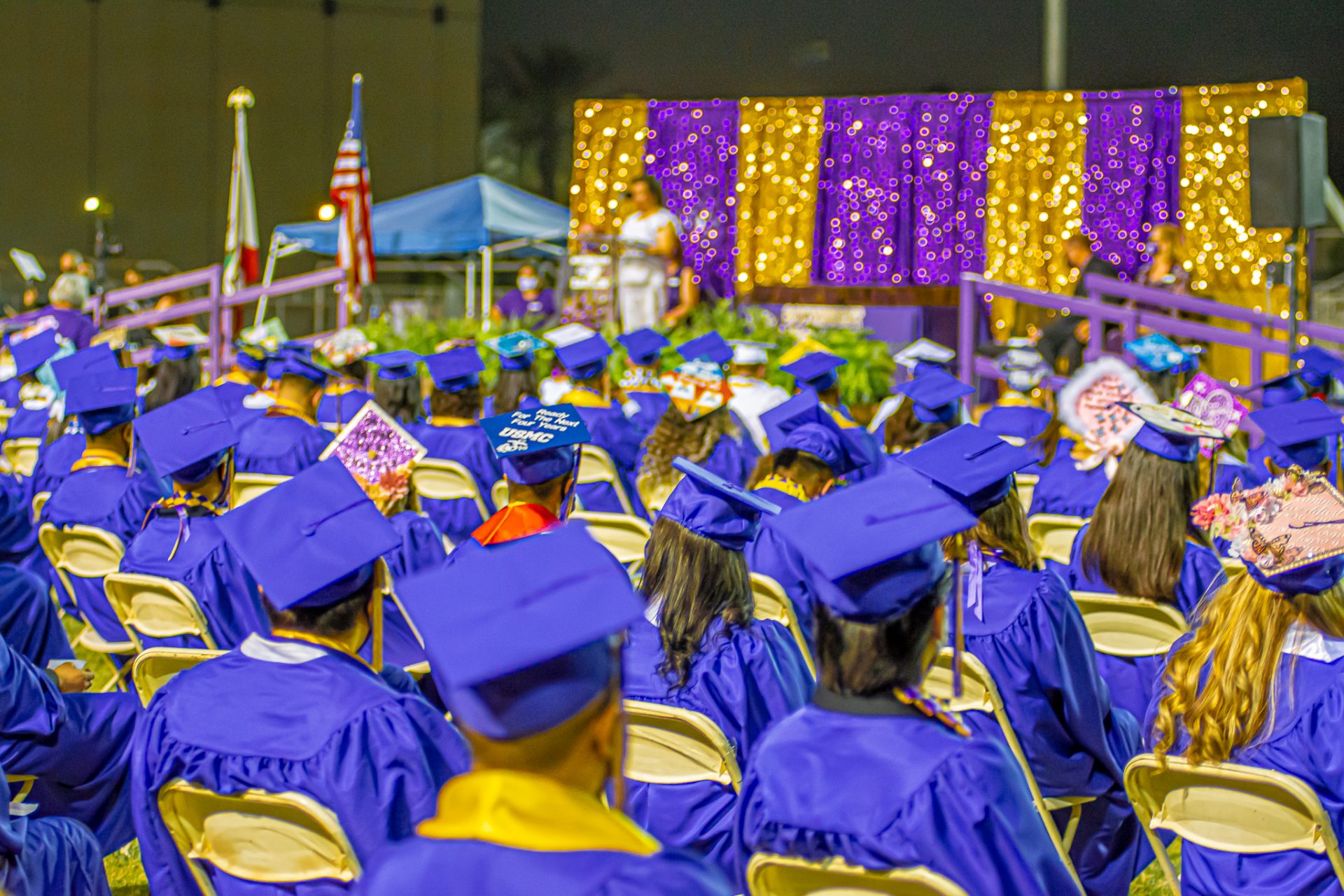 A sea of purple caps hides the faces of excited seniors awaiting their graduation from Southwest High School during the Class of 2021’s commencement exercises at Eagle Field in El Centro on Wednesday night, June 2. | CAMILO GARCIA JR. PHOTO
In Education

Hanna Zia, Jazlyn Peraza and the Class of 2021 Saw Some 433 Seniors Graduate on Wednesday night, June 2.

EL CENTRO — For Hanna Zia and Jazlyn Peraza, two graduating seniors at Southwest High School in El Centro, they persevered through an early life lesson: things do not always go the way you planned it.

This was the hallmark for all seniors in the class of 2021 during a year of changes and turmoil in an ongoing pandemic, where what would have normally been a senior year spent laughing and building lasting memories, was one largely spent in distance learning and missing out of “typical” high school experiences.

On Wednesday evening, June 2, Hanna and Jazlyn gave their classmates, a graduating class of some 433 seniors, some parting words of wisdom during speeches at their high school graduation ceremony at Eagle Field in El Centro.

Wednesday’s commencement exercises were special for Principal Matt Phillips, who just wrapped up his fourth year in the top spot at Southwest.

“At the end of the ceremony, seeing the graduates and their families, it gave me a sense of joy I hadn’t felt in awhile,” Phillips said on Thursday morning, June 3, adding when he first came on board as principal, his freshmen were the Class of 2021-to-be.

Meanwhile, prior to the ceremony, Hanna and Jazlyn said they shared a common theme of being resilient and enduring what life throws your way. The pair won the honor of giving their commencement speeches after an open call to seniors to write an essay. Qualifying essays were then given to a committee, and the top two would be the ones whose speech would be heard.

Hanna explained that she felt as though the Class of 2021’s trademark “was one of resiliency.”

The future University of California, San Diego student, who will be majoring in neurobiology, said she plans to apply to medical school and emphasize on the surgical aspect of the field. She chose to become a Triton because UCSD is “one of the top universities in the country” in that field.

Hanna is no stranger to public speaking, as she is the California state secretary at Southwest’s Cal-HOSA chapter. The club is said to prepare anyone with the ambitions to be future health professionals. She even found time to participate in the school’s orchestra.

The immediate lockdown from school was “a shock” to her because she was active with extra-curricular activities. It was almost devastating to her, that she “could not be able to leave the house,” let alone spend time with her friends.

To pass the time, and keep from losing her mind, she started a new hobby. She learned how to embroider. She practiced her newfound interest on masks, jeans, and t-shirts. She also used embroidery to make friendship bracelets. Because she couldn’t go watch movies at the theater, she became a Netflix addict instead.

Despite schools’ eventual reopening for the final weeks after spring break, she had an epiphany. Hanna realized that this group of Southwest seniors did not just experience “the usual bumps and bruises (of being a senior in high school), we’re the first to experience jagged turns and loop-de-loops.” That is the message that she hoped to get across in her speech on Wednesday.

Hanna thanked her teachers and Southwest High School in general for “allowing me to grow as a student.”

Jazlyn’s winning essay spoke of optimism. Although she missed interacting with friends and the daily complexities of high school senior life, she “was grateful to spend time with family.” Her older sister was also sent home from college during her senior year, and she said she enjoyed spending time with her little brother and her toy fox terrier, Snoopi.

Besides learning how to sew, the Associated Student Body president loved the “time spent with (her) grandmother,” from whom she learned how to make tortillas by hand. She found it “very challenging” to roll out the dough using a rolling pin, but they would come out round.

The future mechanical engineering major at University of California, Berkeley is not quite sure how best to use her degree. But she is thinking about a career in the Air Force, possibly a job in the FBI or as part of the Department of Defense.

Distance learning was something Jazlyn found difficult because of the lack of interaction with classmates and teachers. Interestingly enough, she, like Hanna, found solace in sewing. She had a few sewing projects, but a favorite of hers was a memory quilt she made for her sister.

When the news hit about the campus reopening, she was excited. At first, it was a somewhat bitter return because she found it difficult. As she went to her Advanced Placement prep class, she took a moment for herself because it was difficult to familiarize herself to “placing a voice with a (real) face.” She added that most days, some students accustomed themselves with turning off their screens while they used GoogleMeets as their classroom platform. For her, distance learning was just harder because she usually stared at the black screen.

After all is said and done, she hopes that her optimistic and humorous speech affects her classmates positively. In a sense, she epitomizes the old saying of “when life gives you dough, make tortillas.

Jazlyn thanks her family “for putting up with all my complaints” but reiterated that she wouldn’t change a thing because she was able to strengthen her bond with her family.

Next
Spartan Grad Grateful for Chance to Study in States