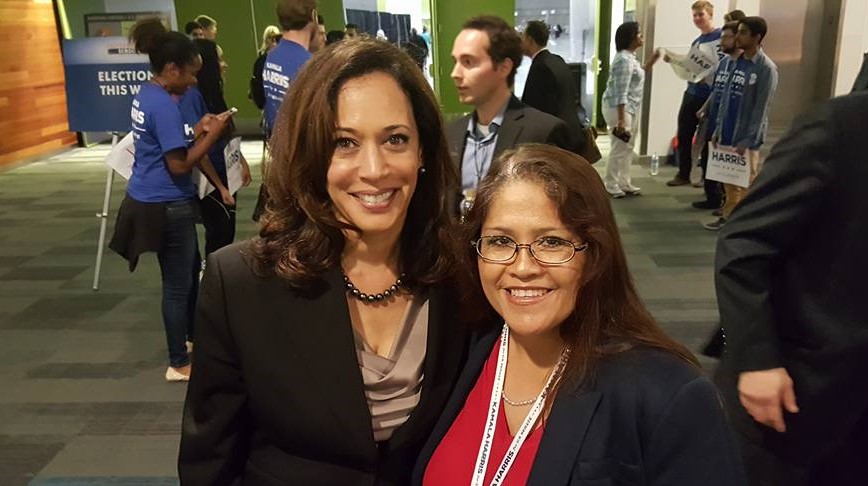 Annette Gonzalez-Buttner (right), who was recently sentenced to three years in the county jail and remanded into custody on Thursday, June 3, for her conviction on four election-related felony charges, poses with now-U.S. Vice President Kamala Harris in a photo dated from summer 2020. | FACEBOOK PHOTO
Home
Public Safety
In Public SafetyRegional News

Boards On the Clock to Fill Gonzalez-Buttner’s Seats

Plans are underway to fill the respective vacancies left on the county Board of Education and the Imperial Community College District board following the sentencing of former trustee Annette Gonzalez-Buttner on Thursday, June 3.

Gonzalez-Buttner was sentenced to serve three years of jail time and one year of supervised probation in connection to being convicted of four felony counts partially related to election fraud on April 23.

She was immediately remanded into the custody of the county Sheriff’s Office after Superior Court Judge Christopher Plourd denied her defense attorney’s request to allow Gonzalez-Buttner to remain free on bail pending an appeal of the sentence.

The county Board of Education is proceeding with the next steps to fill the vacancy in accordance with its board policy and as required by law.

Because Gonzalez-Buttner’s term on the board was not scheduled to expire until December 2022, the board must either make a provisional appointment or hold an election within 60 days of the vacancy.

Gonzalez-Buttner had been suspended from both boards after being convicted on April 23.

For its part, the Imperial Community College District board, which governs Imperial Valley College, is scheduled to host a special meeting to discuss the options available to fill its vacancy at noon Wednesday, June 9.

“Our legal counsel is currently researching the options and will present them to the board,” said Elizabeth Espinoza, Imperial Valley College interim communications and government relations officer.

Its board’s bylaws also state that the board must either order an election or make a provisional appointment within 60 days of the vacancy.

If an election is ordered, it would be held on the next regular election date no sooner than 130 days after the vacancy occurred, the board’s bylaws stated.

Gonzalez-Buttner was elected to the IVC board in November 2020.

Based on the evidence and testimony presented at trial, the jury determined that Gonzalez-Buttner moved to Santa Clara in 2014 and had established her permanent residence, or domicile, outside of Calexico, the area she was elected to represent on the Board of Education.

A hearing is set for Thursday, June 10 to determine whether Gonzalez-Buttner, 56, will be granted bail pending the appeal of her sentence.

Hours after being booked into custody, a written statement originating from Gonzalez-Buttner’s personal email was sent to this newspaper and which included three letters that were submitted to the court on June 3 in support of a motion for a new trial.

Two of those letters were respectively authored by Gonzalez-Buttner’s brother and sister-in-law, while the third she wrote herself.

In her letter, Gonzalez-Buttner maintained her innocence and contended the charges against her were misguided and not supported by any evidence or testimony presented at trial.

“I did not lie. I did not move out. I did not abandon my domicile,” Gonzalez-Buttner’s letter stated. “I never stated that I had the intent to do anything except continue political activism and community advocacy within Calexico.”

Although Judge Plourd had determined that Gonzalez-Buttner was eligible for probation, he stated that the nature and seriousness of her crimes negated her being granted probation in place of incarceration. Gonzalez-Buttner will serve out her sentence in the county jail.

“I don’t think overall that she is a suitable candidate for probation,” Plourd said prior to handing down the sentence at the Brawley courthouse’s east department.

Throughout her trial, the defense had presented testimony and evidence that attempted to prove Gonzalez-Buttner had moved temporarily to Santa Clara to attend college and enroll her children in public schools that provided a better education than in Calexico.

During the sentencing hearing, Plourd stated that he interpreted some of that same testimony and evidence as suggestive of a cover up by Gonzalez-Buttner after she became aware that she was being accused of living outside of Calexico.

“For all practical purposes she’s been a resident of Santa Clara since 2014 and she made up a cover story that made no sense legally,” Plourd said. “I do not believe that Ms. Buttner for one moment believed that her domicile was in Calexico.”

Prior to her sentencing hearing, the court heard arguments during a hearing for the defense attorney’s motion for a new trial. Although the motion had argued that there was insufficient evidence to convict Gonzalez-Buttner of the charges, Plourd determined that there was “overwhelming evidence” that the defendant had indeed relocated to Santa Clara County on a permanent basis.

“I don’t think the jury got it wrong,” he said.

Nor did he agree with Cremean’s assertion that the jury did not receive proper jury instructions and should not have been allowed to examine the question of Gonzalez-Buttner’s domicile.

Gonzalez-Buttner’s three years of incarceration represent the middle term for the perjury conviction related to the 2017 candidate intention statement, the most serious count of the four charges she had faced, Plourd said.

He stayed the two respective two-year sentences associated with the convictions of filing a false declaration of candidacy and grand theft.

The grand theft charge was related to Gonzalez-Buttner having received health benefits and stipends under false pretenses while on the Board of Education. Those expenses totaled about $164,000, it was disclosed during the sentencing hearing.

As part of her probation terms, she was ordered to pay back the full amount as restitution. A restitution hearing was scheduled for July 19.

The court also imposed a one-year sentence for her conviction for the perjury charge related to the falsified driver’s license renewal form, which had listed a Calexico address instead of the address where she had been residing in Santa Clara. That one year-term represented one-third of the three-year middle term that the court decided to impose.

In her argument to have Gonzalez-Buttner placed on probation instead of being incarcerated, Cremeans told the court that the county Probation Department considered her a low-risk offender, that she had always believed that her permanent residence existed in Calexico, was the primary caregiver of two of her youngest children, and had the ability and experience to find employment.

“She was never trying to rip off the people of Calexico,” Cremeans said. “She was trying to represent them.”

During her sentencing hearing, county Deputy District Attorney Anthony Valente stated that the DA’s Office had considered investigating Gonzalez-Buttner for potential crimes related to her candidacy filings for the ICCD trustee seat but decided against it.

“The people have chosen to proceed with the current charges and not proceeded on that issue,” Valente said.

He further indicated that her conviction essentially barred her from holding public office ever again.

Public records on file with the county Registrar of Voters indicate that Gonzalez-Buttner’s listed address on her ICCD candidacy filings was the same Calexico address she provided in her 2017 candidacy filing for the Board of Education seat.