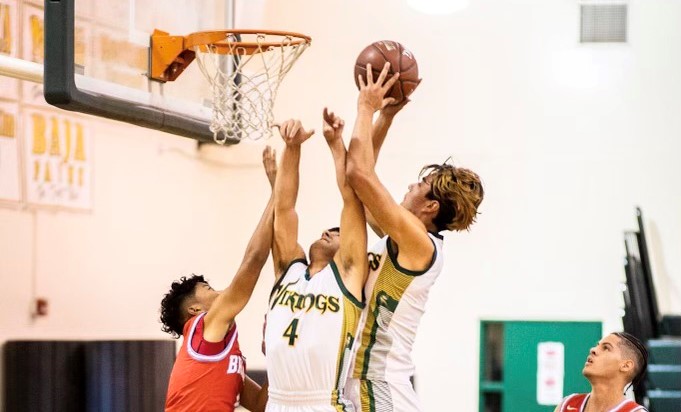 ESCONDIDO — The Holtville High School boys’ basketball team is tired of seeing Calvin Christian High of Escondido in the playoffs after the Crusaders eliminated the Vikings from the CIF-San Diego Section playoffs for the second consecutive year.

On Tuesday, Calvin Christian jumped out to a 20-9 lead at the end of the first quarter, after trailing 9-2 to start the game. The Vikings weren’t able to get any offense going against the taller Crusaders, finishing the first half down 33-15.

The Vikings, co-champs of the Imperial Valley League along with Central Union High School, defeated Escondido Charter 57-53 in the quarterfinals on Saturday, June 5, on the Holtville campus to reach the semifinals.

Holtville trailed 24-22 at the half but a big third quarter gave the Vikings a 39-35 lead heading to the final period where both teams put up 18 points.

“We came out in the third quarter and applied more pressure to them defensively and tried to speed up the game,” said Tony Ramos, Holtville’s head coach. “We were able to build a lead and then kept fighting them off in the fourth quarter.”

In the first round of the playoffs on June 1, Holtville routed 14th-seeded El Cajon Valley, 69-45. The Vikings used a big third quarter in that game as well, breaking open a 25-19 halftime lead with a 23-14 advantage in the third period.

Maize led Holtville against El Cajon Valley with 18 points, followed by Perez with 17 and senior Roman Ordonez with seven.

The other IVL team still alive in the San Diego Section playoffs is Vincent Memorial Catholic of Calexico who advanced to the Division V championship game on Tuesday with a 49-39 victory over St. Joseph Academy of San Marcos.

The Scots will play in the Division V title game against Crawford High of San Diego at 7:30 p.m. on Thursday, June 10, at Serra High School in San Diego.

Next
Stream N’ Chill: She Calls the Shots