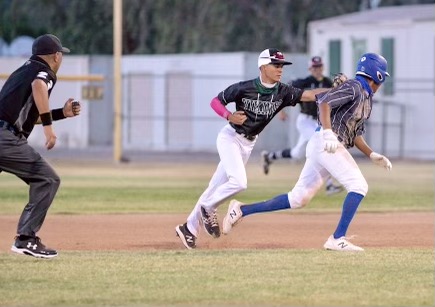 Holtville High School senior Erik Garcia makes a tag on a Central Union High School base runner during the final Imperial Valley League game in Holtville on Tuesday, June 1. The Vikings are the fifth seed in the CIF-San Diego Section Division IV playoffs while the Spartans are the 11th-seed. | HOLTVILLE HIGH SCHOOL COURTESY PHOTO
Home
Sports
In Sports

Holtville (12-9 overall, 8-6 in Imperial Valley League) is hosting San Diego High at 7 p.m. Tuesday, June 8, in a one-game, play-in contest to earn the right to enter the tournament. The winner will move on to play fourth-seeded Mission Bay High School on Wednesday, June 9, in San Diego.

San Diego High was the last team selected for the play-in round and comes into Tuesday’s contest with a 10-16-1 overall record and the Cavers finished fourth in the City League in San Diego.

Holtville struggled down the stretch of the IVL campaign, losing three of its last four games, dropping two to Southwest before beating Central 10-6 and then dropping the season finale to the Spartans 6-3.

The loss to Central in the final game of the season might have cost the Vikings an automatic berth in the double-elimination tournament, but it also might have gotten the Spartans into the play-in round. Central is the 11th-seed in the play-in round and traveling to San Diego to face Maranatha Christian High on Tuesday, June 8.

Sophomore Raul Sierra had two hits against the Spartans, driving in a run and scoring a run for the Vikings.

Next
Luchadores Get Love from Imperial Valley