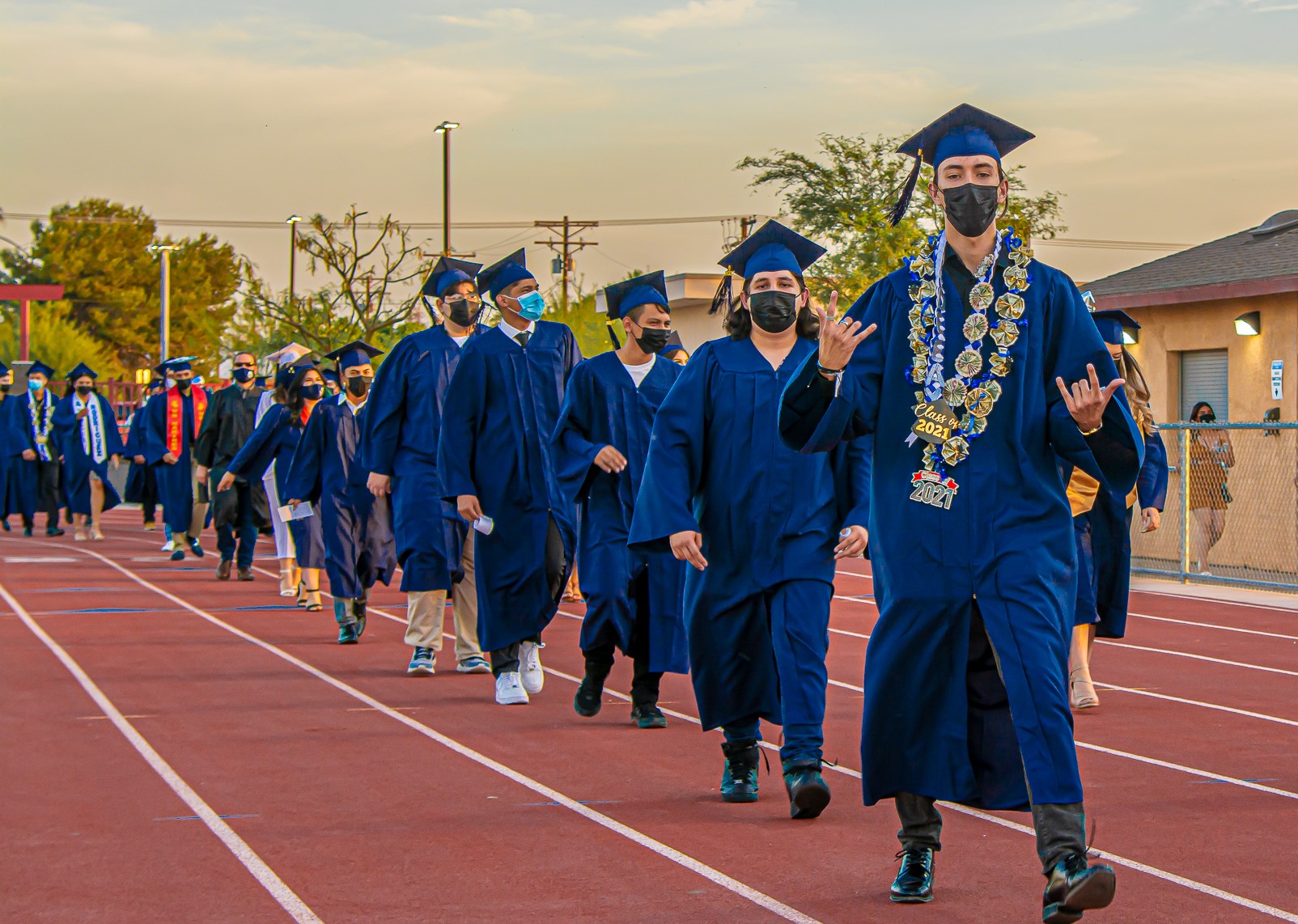 Aurora High School senior Gerardo Armendariz gestures to the camera as he walks onto Ward Field for the Aurora Class of 2021’s commencement on Tuesday, June 8, in Calexico. | CAMILO GARCIA JR. PHOTO
In Education

COVID Cut Graduating Class in Half, But Those Who Walked Showed Grit, Determination.

CALEXICO — For the 45 graduates of Aurora High School’s Class of 2021, those who dug deep to accept their diplomas and walk during commencement were ones who really wanted it.

Valedictorian Omar Guerrero Orozco and salutatorian Valeria Zazueta are two examples of motivated and determined students who — despite personal and domestic issues that brought them to Aurora High — put their collective heads down and worked hard every day.

Seventeen-year-old Omar, who was to turn 18 in a few days, knew that he “had to put in a lot of work, to get what you want.”

It was much the same for 18-year-old Valeria Zazueta, who credited several educators and her mother for helping her to stay focused and moving forward.

Zazueta said her mother played an important role in her support group, who would “always tell (me) that I could achieve whatever I wanted, with some effort.”

The truth is, motivation and effort were hard to come by for the Class of 2021, which was graduating about 50 percent of what it usually does.

“We graduate around 70 to 80 students,” Aurora Principal John Moreno said. Yet because of the lockdown, getting the students to log into school virtually through distance learning was frustrating and disheartening, he said.

It seemed as if the entire staff, including himself, spent a lot of time making house visits to remind students of their responsibilities.

“We are graduating 50 percent this year,” Moreno said, but adding that on the bright side, more students will reach their goal to receive enough credits to graduate by the end of summer.

Moreno estimated that another 15 to 20 students will graduate before the next school year begins.

On Tuesday, June 8, there was cause to celebrate those who did make it to that magical mark of 50 percent.

If anyone gets that, it was commencement keynote speaker, Blanca Elena Morales-Liess, who is now the chief executive officer of the Calexico Wellness Center and a proud 1981 graduate of Aurora High.

Morales-Liess is no stranger to hardship. By the time she graduated, she had already given birth to her son, Ernie. She raised her son as a single mother and never stopped working hard.

That experience alone taught her the kind of lessons and wisdom she imparted on Tuesday night.

Before that even, life at Aurora steeled her for the path ahead, as it “was a steppingstone, because there is so much more out there.”

Omar and Zazueta are examples of the can-do spirit that marked the graduating class.

For Omar, he’s looking into his options and is eyeing the possibility of entering San Diego State University’s cyber security “boot camp.” He said one has to “live your life, with the tools you are given” and strive to reach goals; nothing is just given to you, he said.

Academically, Guerrero was no slouch at Calexico High School. He was a hard worker, he said.

But he was a new kid in town and simply fell between the cracks. Slowly, but eventually, he fell behind in credits and that was when the decision was made between himself and the school district to transfer to Aurora, where he found a comfortable pace and shined as a student once again.

Guerrero was quick to add that he owed gratitude to his two aunts and other key figures for his success, thanking “Tia Angela, Tia Tania, his grandmother, and English teacher, Mr. Borobia,” for keeping him on task and for being compassionate and understanding.

Zazueta said whenever she felt as if the walls were closing in around her, she would remember the inspiring words from “Ms. Gomez,” when she reminded her students that “you are capable of doing more.”

To “Ms. Moncada,” Zazueta gave the educator credit for never “letting me get down on myself.”

The pandemic and lockdown were difficult to get through, Zazueta said, but she kept her eyes on the prize, so to speak. She said if she could give advice to her fellow graduates, she would tell them not to lose sight of their goals and dreams.

“You will get through this, too.”