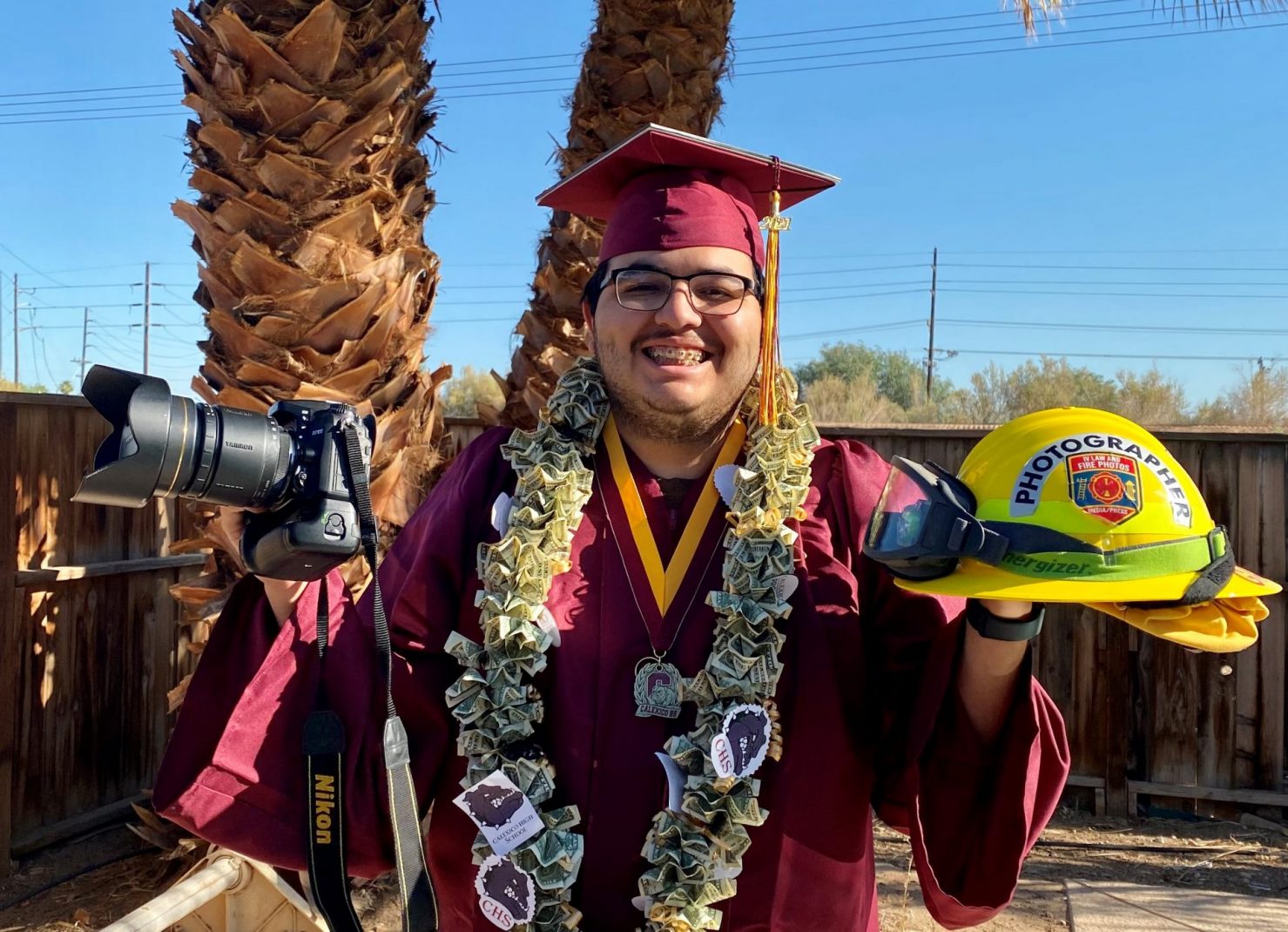 Calexico High senior Camilo Garcia Jr., who is set to graduate on Thursday night, June 10, is the Swiss Army knife of teenagers. At 18 years old, he's a legit photojournalist with credits in the New York Times and Newsweek, a pilot in training, and an all-around "jack of all trades," as his law enforcement instructor Mike Davies likes to say. | CAMILO GARCIA JR. PHOTO (Yep, he took his own photo)
Home
Education
In Education

Camilo Garcia Jr. Will Graduate Calexico High Without Ever Missing a Day of School … Since Kinder.

CALEXICO — Being a parent of a teenager myself, it’s quite conceivable that soon-to-be Bulldog grad Camilo Garcia Jr. is the kind of kid that makes one look at their own child and wonder, “Where did I go wrong?”

I’m joking, of course, but the kid is a dynamo.

When the 18-year-old senior walks with his Calexico High School Class of 2021 on Thursday, June 10, he’s going to do so having a wealth of experiences under his belt that most people haven’t had in a lifetime.

A credited news photo prominently displayed on the websites of the New York Times and Newsweek (check). A pilot in training with 40 hours of time in the air (check). Threatened with violence for flying a drone over a crusty commune in the Slabs (check). The only working photographer I’ve seen in the Valley today who is invited behind the face-melting fire lines (check).

“Well, I like adrenaline. That’s why I do what I do. … that’s always been a thing of mine,” Camilo said on Wednesday morning, June 9.

Whether its planes or chasing after police officers and firefighters at all hours of the night to build up his hugely popular IV Law and Fire Photos social followings, his interests have always circled back to his love of law enforcement and his desire to continue a family tradition of working in public safety (one of his older brothers, Alex Cano, is a California Highway Patrol officer).

More of that later. But right now, as Camilo gets ready to receive his diploma, he will do so having not missed a single day of school in 13 years (if he makes it through Thursday unscathed; knock on wood), an accomplishment that will be acknowledged at an upcoming board meeting of the Calexico Unified School District.

It’s part and parcel of his personality: exacting, goal-oriented, committed. And as humble as young Camilo is, he knows this is a big accomplishment, and so does his family.

His father, Camilo Garcia — yes, the Calexico City Council member — said his son has missed family functions and important occasions because of the boy’s desire to make this goal a reality, including not attending brother Alex’s graduation from the CHP academy.

Camilo Jr. even held off having knee surgery from an injury he suffered during football season in order to keep his streak intact.

The school district will acknowledge 13 years of public-school attendance, but Camilo Jr. counts it as 14 years, saying he never missed a day of preschool either.

“I made it. I made it happen. My parents helped me; they are the ones that made it happen, too. I mean, it’s been 14 years in the making for this, and I’m one day away from accomplishing it,” Camilo said. “I mean, it feels good that this lifelong goal of mine is about to happen.”

This kid is something, and he’s inspired some of us here at this newspaper to work a little harder and be a little better, because if this 17-year-old high schooler (the age he started really working with us) can kick butt on every level, then we better do it, too.

The thing about Camilo is, he comes from a high-profile family. His father is a council member, and his mother is an administrator with the school district and has been the head of the community-focused Family Resource Center for 18 years (since Camilo was a baby, she said). Plus, he’s got two brothers 10 and 11 years his elder.

Yet at this rate, they’re all going to be known as Camilo Jr.’s family, rather than the “Councilman’s kid” or “Hortencia’s son.”

All of this energy, the photos, the flying, the laser-like focus, all comes back to his desire for a career in law enforcement, and he has a two-tiered plan.

No. 1, he wants to fly tanker planes for the California Department of Forestry and Fire Protection, better known as CAL FIRE, dropping water or flame retardant on wildland fires ahead of the smoke jumpers or the fire crews putting themselves in harm’s way.

He got his love flying when he took his first flight during a past Aviation Day at the Imperial County airport, and he has never missed a Blue Angels air show.

No. 2, if that doesn’t pan out, he’s set on being a public information officer for any law enforcement agency, be it fire, police, federal or state.

To get there, Camilo Jr. will be among the first members of a true freshman class attending San Diego State University-Imperial Valley campus in Calexico to get a four-year degree in criminal justice. Previously, four-year pathways at SDSU-IV were part of programs like the Freshman Scholars.

None of what Camilo Garcia Jr. has shown has surprised those closest to him.

The minute Camilo walked into Mike Davies introductory criminal justice course as a junior, he just about took over.

“This kid volunteered for everything. I almost immediately promoted him in the classroom; we have classroom leaders, and we kind of use the same chain of command that law enforcement agencies use. So, he was promoted to a corporal,” said Davies, whose been teaching the courses at Calexico High for seven years and was a former Calexico police officer.

“He did nothing but fantastic work. He was no nonsense. The students respected him, because he had a certain sense of command presence that doesn’t normally come in this case, it’s normally developed after a year or so with me,” he added.

Davies called Camilo “intuitive,” and that’s a perfect description for him as he has really used that intuitive nature to blossom in photojournalism.

A California Highway Patrol Explorer and a sponge for anything law enforcement related, the picture-taking started as a lark, with him emulating the roving freelancers that follow scanner traffic in bigger cities like Los Angeles, he said.

For him, it started with his cell phone camera and a challenge to see if he could do it, but when one of his first posts under the IV Law and Fire Photos brand got 200 likes right out of the gate, he was hooked.

Today, IV Law and Fire Photos has more than 2,300 followers on Facebook and nearly 1,200 connected through Instagram.

It’s what brought him to us. First, we asked to use some photos by permission. Then, we offered him a regular gig. And he has grown from an inexperienced photographer using his phone less than two years ago to having a photo licensed and paid for by the New York Times.

He also recently was contacted by one of the country’s leading manufacturers of fire engines after they saw a photo of one of their newest trucks in action, Engine 1 of the Imperial County Fire Department. The photo of the 2021 model is going to be a focal point of company’s showroom, Camilo said.

We’ve seen him continually get better, watched his skills progress, and, in our estimation, this wunderkind is the best working news photog in the Valley. But we’re biased, of course.

At the heart of this young man, though, is a drive to do good, to serve others, and do so humbly. Although not in an official capacity, Camilo has basically been the school’s photographer this year, allowed to shoot all sports, practices, many student activities, and basically capture student life in many ways as in-person instruction and events slowly resumed.

Mom Hortencia said he spends hours processing photos of students and law enforcement and sending the photos to them free of charge, even when the students offer to pay for the services.

“Our family is all about giving and serving. We’ve always done that. And Camilo has always said, even in elementary, kindergarten, or whatever, he says, I’m going to be the student with the most community service hours ever,” Hortencia Armendariz said.

“What I really love about Camilo is that he loves to serve. And he’s served silently, without anybody watching and not expecting any kind of recognition,” she said.

Even in his pursuits and club memberships in school, you can see the direction he travels, a more behind-the-scenes, service-oriented path. He’s been the president and governor of the Calexico High Interact Club for three years, which is the junior version of the service club Rotary International. He’s the sergeant, or “the brass,” in his criminal justice program, meaning he’s the top guy, but he’s also president of the affiliated Law Enforcement Club. Camilo is also part of the Associated Student Body government, where in pre-pandemic times, he was the man who set up all the speaker equipment to broadcast events.

“He really is just a multitasker. He likes to do a lot of things. And he’s always been focused,” Armendariz said. “He’s one of those kids that if I’m not here tomorrow, my son will still make it, because he had that strong foundation, and he’s been able to absorb all of those positive things that we’ve learned and been able to learn from whatever mistakes that we have been through. We’re so, so proud of him.”

Next
IVC Board to Decide How to Fill Trustee Seat