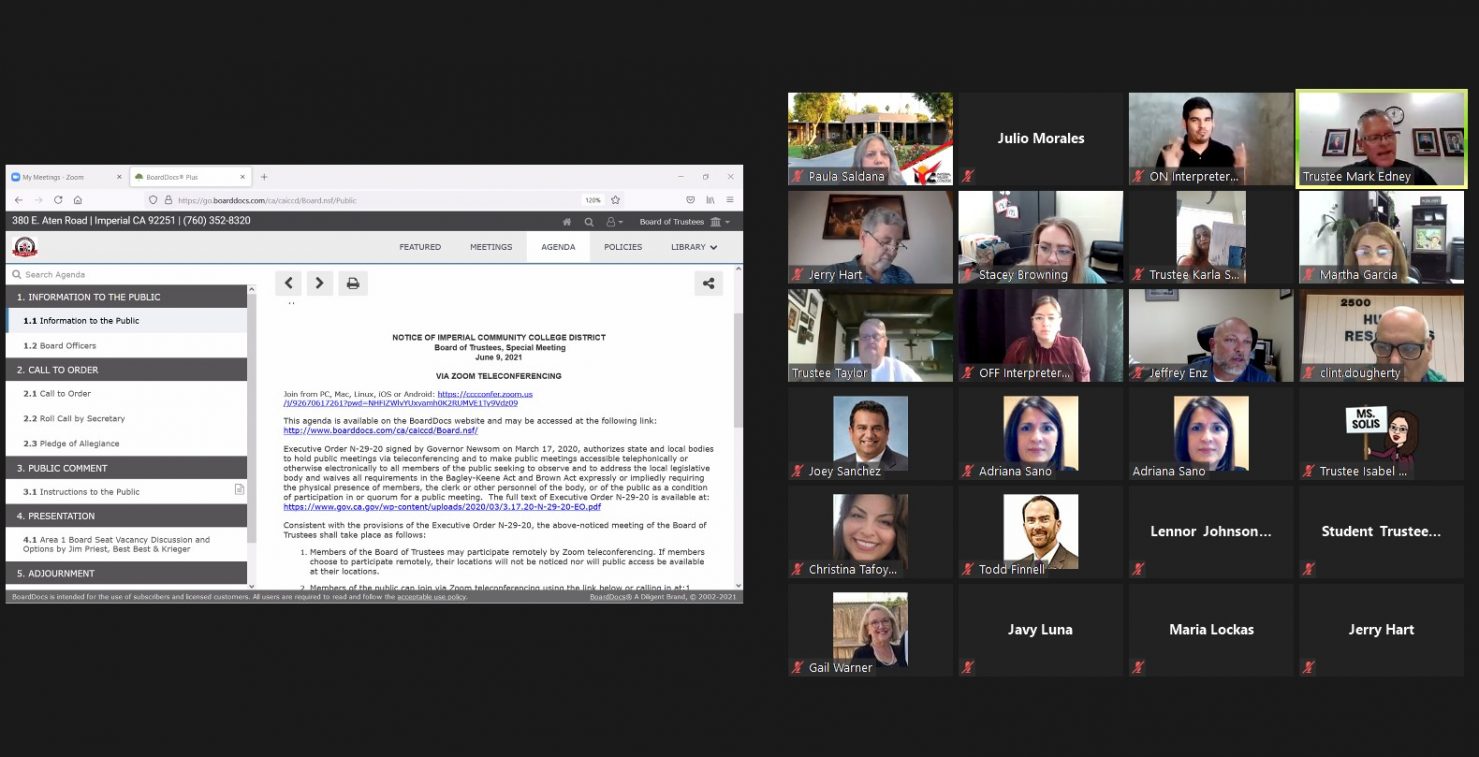 The Imperial Community College District board and members of the public meet virtually on Wednesday, June 9 to discuss options on how to fill the board trustee vacancy prompted by the sentencing of former Trustee Annette Gonzalez-Buttner. | VIDEO CAPTURE
Home
Education
In EducationRegional News

IVC Board to Decide How to Fill Trustee Seat

No Clear Choice Emerges on Moving Forward; Issue to Come Back June 16.

IMPERIAL — No clear consensus emerged regarding how the Imperial Community College District board would prefer to fill the trustee seat left vacant by the recent sentencing of Annette Gonzalez-Buttner during a special meeting Wednesday, June 9.

The Imperial Community College District board, which governs Imperial Valley College, is scheduled to meet again to further discuss the matter and potentially approve one of the two options during its next regular meeting on Wednesday, June 16.

The board did not take any formal action during its special meeting. The meeting was convened to allow its counsel, Jim Priest, an attorney with law firm of Best Best & Krieger, to inform the board of its options to fill the vacancy and the options’ related timelines and outcomes.

As of June 3, the board had 60 days to fill the vacancy that occurred once Gonzalez-Buttner was sentenced by a county Superior Court judge on four felony charges partially related to election fraud. She had represented the college board’s Area 1, which encompassed the communities of Calexico and Heber.

Should the board decide to fill the vacancy by appointment, the appointee would serve until the November 2022 election, in accordance with state law regulating such elected body’s vacancies, Priest said.

The same state guidelines require that whoever be elected in November 2022 to the Area 1 seat solely serve a two-year term until November 2024, which is when Gonzalez-Buttner’s original four-year term would have expired, Priest said.

“It cannot be a three and a half-year appointment,” he said.

Filling the vacant trustee seat by appointment would also require the college district to establish a timeline by when it would announce the appointment process, start accepting interested community members’ applications, schedule interviews with prospective trustees and approve its selection, all by the Aug. 3 deadline.

The board could fill the vacancy for the remainder of its four-year term by approving a special election.

To qualify the special election for the general Nov. 2 election, the board would have to agree to do so by June 25. The trustee’s seat would also remain vacant between now and the election, Priest said.

If the board were not able to agree to a special election until after June 25, the next available election it would qualify for would be in April 2022, resulting in a 10-month vacancy, he said.

The college district would also have to pay for the cost of the special election, which would be about $10,000, said Martha Garcia, Imperial Valley College president/superintendent.

“It may be a little more or slightly less,” she told the board members.

Following the presentation by the district’s legal counsel, Trustee Karla Sigmond said she was in favor of appointing someone to fill the vacancy, as the board has done in the past.

The appointment would also help the board avoid having an empty trustee’s seat during the five months until the November election, she said.

“If anyone out there is wanting to be part of (the) board, they can go ahead and go through the process the way we’ve done it before,” Sigmond said. “It’s a democratic process.”

Trustee Jerry Hart also said he preferred to make an appointment and have that person serve until the November 2022 election.

“Those people who are asking for an election would be represented in the meantime,” Hart said.

The only board member to express a preference for a special election was Trustee Isabel Solis. She said the estimated $10,000 price of a special election wasn’t too much of a burden and that the most recent election had seen a greater turnout of voters, who should be given another opportunity to select the candidate of their choosing.

“We owe it to the people of Calexico and Heber so that they have the ability to vote on the person that they feel should represent them,” Solis said.

Trustee Romualdo Medina said he didn’t have a clear preference for either option and was flexible either way. Trustee Steven Taylor also refrained from expressing a preference and instead requested to have a couple days to review the available options.

Board President Mark Edney said both available options gave him some cause for concern and that he wasn’t convinced either presented a clear advantage. He further acknowledged that calling for a special election in an off-year such as 2021 may prompt less people to cast a vote than in a regular election year.

Ultimately, he, too, asked for more time to come to a decision.

“I think it requires reflection on what’s best for the college, for the board and for the people,” Edney said.