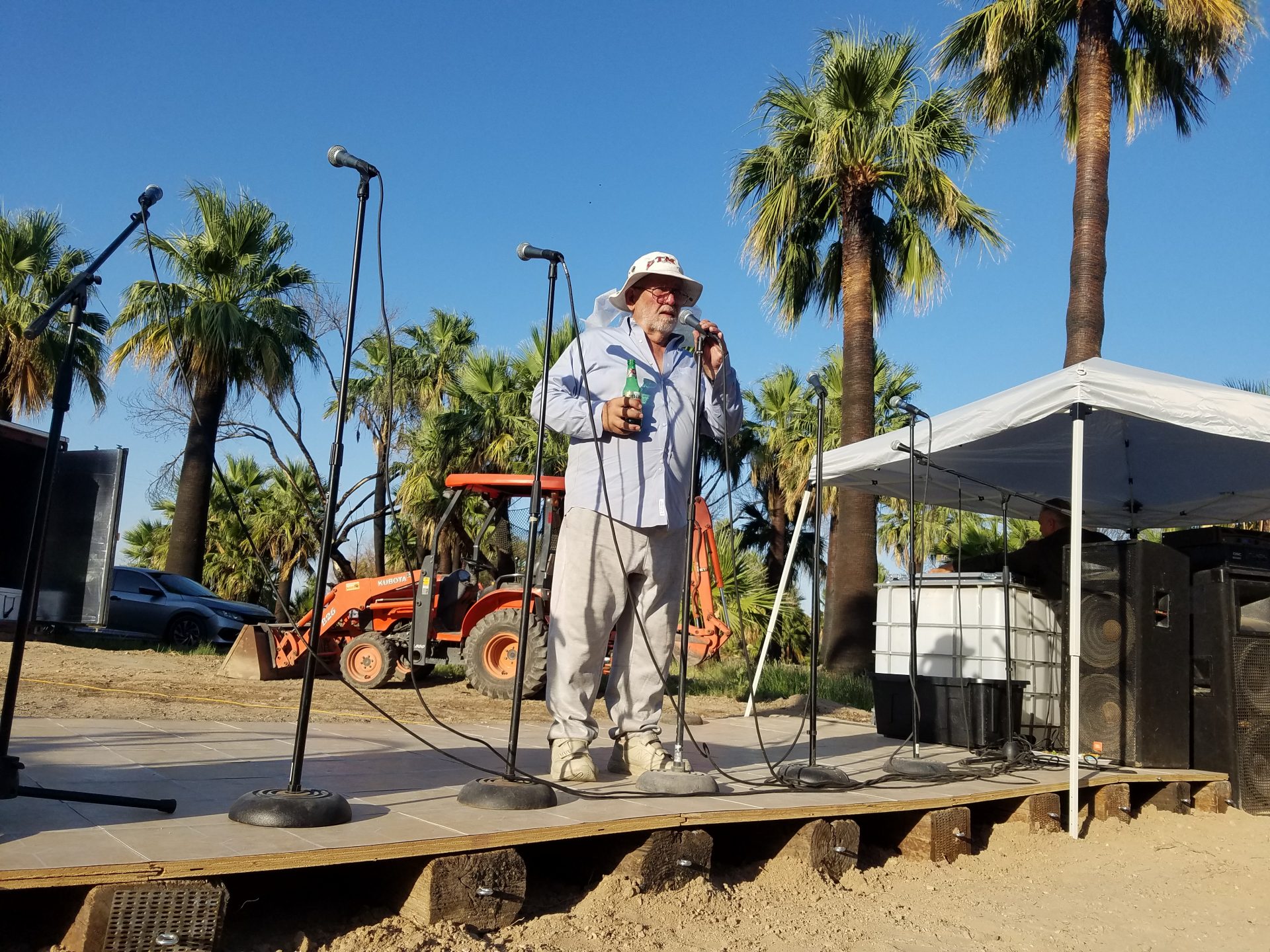 Niland resident Barnacle Snug Luffy hosted a celebration on Friday, June 4 to commemorate the ongoing restoration of the wildlife habitat on his property that was impacted by the June 28 fire. | JULIO MORALES PHOTO
Home
Regional News
Share

NILAND — Nearly a year after a devastating fire destroyed his home as well as dozens of others, Barnacle Snug Luffy and his wife, Satya, are still living out of a mobile home parked on their Niland property.

And though plans call for the rebuilding of a new home on their six-acre spread near where the June 28 fire had originated, it is not the couple’s top priority.

Instead, the pair have dedicated much of the last year to restoring their property on Fourth Street west of Highway 111 to its previous condition as a certified wildlife habitat.

“We’ve kind of put the house on the backburner while we’re trying to get the property cleaned back up so that the animals can return and have their young,” Luffy recently told a local filmmaker. “To us that’s what it’s all about.”

The Luffys’ efforts have also earned them the support of the wider community, many of whom gathered for a celebration on Friday, June 4. And as Luffy and many guests had observed, the event also served to uplift the spirits of the township as it struggles to recover from the June 28 fire.

“We decided to have a little party to lift up the mood,” Luffy told his guests that day. “And we’re starting to lift the mood here in Niland the best we can.”

The Niland wildlife habitat is an oasis situated among nearby rural homes, farmland and undeveloped property, where about 500 Washingtonia palm trees and three relatively large ponds serve as a lush attraction for a variety of local wildlife.

Prior to the devastating fire, it was common to see bobcats, coyotes, skunks, migratory birds, waterfowl snakes, owls, foxes, and muskrats, to name just some species, at the location, which is certified as wildlife habitat by the National Wildlife Federation.

About a third of the property has been restored and the wildlife appears to be trickling back in, Luffy told local filmmaker and fellow Niland resident Ryan Joseph Perez in a 15-minute video Perez produced and uploaded to YouTube entitled “New Beginnings for a California Wildlife Habitat.”

In the video, Luffy details his and his wife’s intimate connection to the property, their shared love of animals and the evolution of the wildlife habitat.

Though his family’s connection to the land dates back to the 1980s, Luffy didn’t arrive until about the late 1990s, when he purchased a plot next to his father’s parcel. Since then, he has seen how farmland and development has encroached on the amount of natural habitat that wildlife has had at its disposal.

“They have a very small place to have their young and it turns out over the years they kind of migrated here,” Luffy said in the video.

Luffy, who is also affectionately known as “Doc” because of the medical training he received during his stint in the U.S. Army, is also a rehabilitated recluse who prior to the fire passed his time working on his many projects and preferring the company of the local wildlife.

But as the June 4 celebration highlighted, Luffy has become more welcoming of the outside world.

“I want the party to return hope and positive thinking,” he told the filmmaker Perez. “Things are going to work out.”

Niland Chamber of Commerce treasurer Debbie Salas Rico said she first met Luffy a short time prior to the June 28 blaze that left 33 Niland households displaced and caused about $3.6 million in losses.

Following the fire, Salas Rico paid the Luffys a visit to offer any assistance the chamber could provide the displaced family. The night of the blaze, the Luffys were solely able to rescue a pair of goats before the windswept inferno engulfed their home and reduced the vast majority of their belongings to ash.

At Doc’s urging, Salas Rico was back at the property on June 4 to take part in the festivities. She expressed amazement at the progress that the Luffys and Satya’s sister, Sotcheat Kim, had made with the property’s restoration.

“Me myself, I’d give up, but not them,” she said, adding that the effort has been a source of pride in the township. “He’s been a real big help in Niland.”

Calipatria Chamber of Commerce member George Prieto said he had also visited the Luffys a few days after the June 28 fire and was heartbroken by the devastation he saw. To help lift their spirts, the avid singer serenaded them with some mariachi songs.

On June 4, Prieto was at it again as he entertained the crowd at the habitat restoration celebration.

“We’re still here for support for whatever they need,” Prieto said. “We’re their sister city.”

Stella Jimenez, district director for the office of Assembly member Eduardo Garcia, D-Coachella, was also on hand on June 4 to present the Luffys and Socheat Kim with proclamations recognizing their efforts.

“Words cannot express how beautiful it is out there,” Jimenez said.

The Luffys’ nearby neighbor also stopped by to enjoy the revelry. Deborah, who asked that only her first name be used, said her property had sustained some fire damage but nowhere near the extent the Luffys had suffered.

The night of the fire she had to evacuate her home without knowing her neighbors’ fate. When she had returned the following day, she, too, was dismayed by the destruction she saw. However, the restoration celebration on June 4 helped offset those unforgettable images.

“This is what you want to see a lot more of in today’s society, but you just don’t,” Deborah said. “So, any time you’re able to be around it and absorb all that it’s a good thing.”