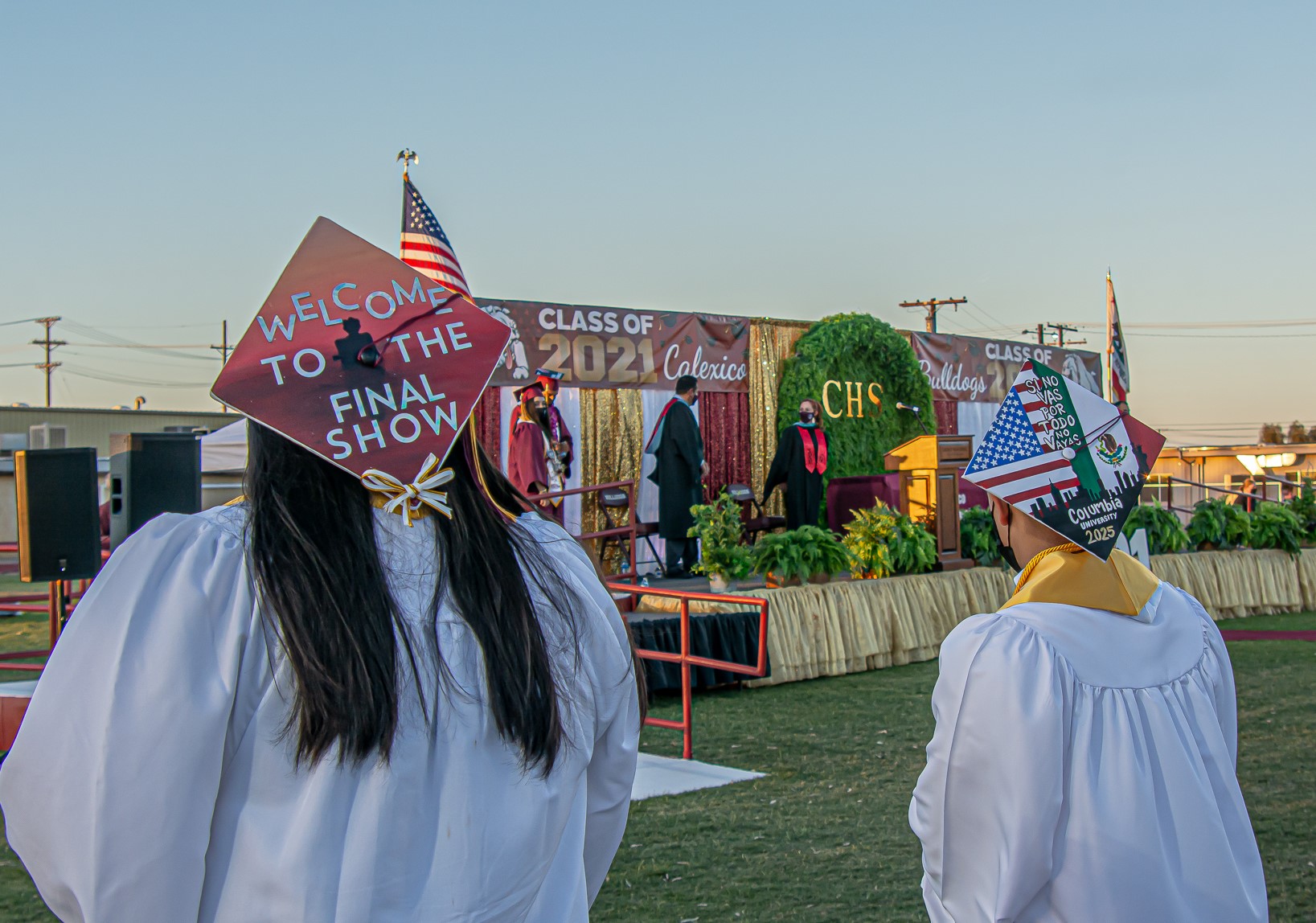 Calexico High School Class of 2021 valedictorian Mariana Ledesma (left) and salutatorian Allen Arreola listen as graduation ceremonies get underway on night one of two at Ward Field on Thursday, June 10. The 619 graduating seniors were divided into two nights by last names between A and K on Thursday and L and Z on Friday, June 11. | CAMILO GARCIA JR. PHOTO
In Education

CALEXICO — Rising to challenges and being the change this generation wants to see were themes Janessa Contreras would touch on twice over two nights as she spoke to her fellow graduates of Calexico High School’s Class of 2021.

“I open social media and see you guys advocating for social justice, volunteering to serve our underprivileged community, educating the public, and most importantly, being unapologetically authentic,” said the senior class treasurer and one of two featured student speakers during commencement ceremonies split over two nights, Thursday, June 10, and Friday, June 11.

“I see you guys crossing borders and making sacrifices for your own features. You are truly becoming the change Calexico needs to see. You all carry a piece of Calexico with your hearts and inspire me and the public to continue moving forward,” Contreras said on Friday night as the second and final half of the 619 seniors of Calexico High accepted their diplomas. “Be unapologetic, be driven, and cherish your values close to home. I’m excited to see what the future has in store for you all.”

On Friday, students with last names starting with the letters L through Z graduated. Students from A to K graduated on Thursday night.

Contreras wrapped her speech with words of wisdom from marital arts legend Bruce Lee in what seemed a clear reference to the resiliency that the students of 2021 had to face amid pandemic conditions, where the year began at home in distance learning and slowly, and at times awkwardly, opened up to in-person instruction and pockets of gatherings by year’s end.

“Be formless, shapeless, like water. You put water in a cup, it becomes a cup. Now water can flow, or it can crash,” Contreras said, repeating the words attributed to Lee that were in fact dialogue from a 1971 television show in which Lee was playing a wise martial arts master. “Be water my friend. Thank you.”

It was a smart and subtle way to speak to her fellow students about their lives amid a turbulent year when so much of their student life, including the adapted graduation ceremony itself, were marked with grim reminders of such change at every step. Those changes included the splitting of the class into consecutive ceremonies and the decision to send the students with their families before the event-ending fireworks display began so that students would keep their distance from each other.

Calexico High Principal Gabrielle Williams Ballesteros addressed some of the angst that had likely settled in on the students over the year.

“For many of you, this year brought more than a lifetime of challenges. And I know that although you have faced fear, doubt, maybe loneliness, anxiety and even anger this past year, your unwavering commitment to yourself, to your dreams and your goals has endured,” Williams said on Friday night.

“You are a better and a stronger person today. You can go out to the world, to create, to build, to paint, to sing and to make a difference, and hopefully a difference in your world. I have no doubt that in the future, you’re going to tackle challenges with confidence, with determination and you’re going to come out stronger,” she added.

Senior Class President Michael Frayre, who delivered the majority of his farewell speech in Spanish, brought faith into the fold, as he chose what seemed like an appropriate Bible verse to provide strength during a time when many felt at their weakest.

“‘Fear not, for I am with you/Be not dismayed, for I am your God/I will strengthen you and I will help you/I will uphold you with my righteous right hand.’”

The two successive evenings were about the students, and in addition to a welcome address from Ethan Noriega, Associated Student Body president and this year’s Bulldog Hall of Fame recipient, the student-led Navy cadet corps color guard presented and posted the flags while senior Cristina Gallo Sanchez sang the national anthem.

Senior Cesar Martinez-Solano sang a song at the midpoint, before the names of the graduates were read on both nights, and the show was closed by Bulldog senior, reality TV contest winner and member of the regional Mexican pop group Nuevo Elemento, Yahir “El Choco” Garduño, who sang once on June 10 due to technical difficulties but was able to sing two full songs on Friday as the students made their way to their parents to watch the fireworks display that ended the evenings.

It was a joyous event for a whirlwind year, and seniors Valerya Medina and Daniela Montes were giddy before they even made their way onto Ward Field before the commencement on June 11.

“I don’t even know how to describe my last four years of high school because they went by really fast,” Montes said, who said she plans to attend Imperial Valley College and transfer to a school where she can obtain a criminology degree “because I want to become a criminal lawyer.”

Medina, who became homecoming queen during a COVID-modified version of the time-honored tradition this year, called her high school experience “incredible.”

She, too, will attend IVC before transferring to San Diego State University in hopes of becoming a neonatal nurse practitioner.

“I really can’t sum up everything because I’m just really shocked at how everything ended so fast,” Medina said. “I would always hear everybody say, your four years are gonna go by really fast, and I never believed it until this moment, but I would say (it was) the best four years of my life.”