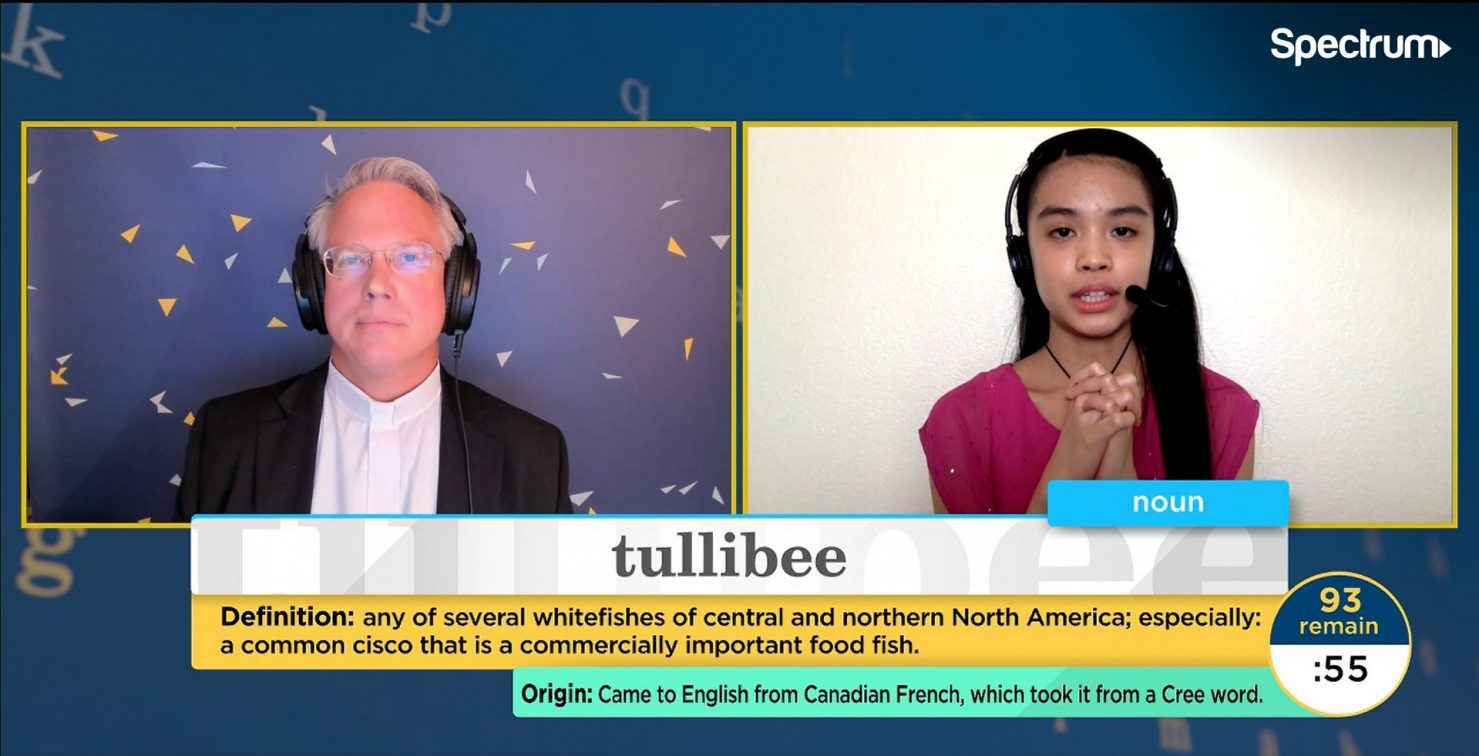 Imperial Valley Home School Academy seventh-grader Jaedillene Laurino was recognized on March 22 by the Imperial County Office of Education for winning the 16th annual Imperial County Spelling Bee. She was eliminated in the preliminary round of the Scripps National Spelling Bee on Saturday, June 12. | JULIO MORALES PHOTO
Home
Education
In EducationRegional News

BRAWLEY — The word “affixion,” meaning the act of affixing or attaching something, unaffixed 12-year-old Jaedillene Laurino from further competition in the 2021 Scripps National Spelling Bee.

Competing remotely from her Brawley home, Jaedillene was speller No. 192 of 209 and Imperial County’s representative in the national bee. The preliminary round on Saturday, June 12.

“I was really excited to actually be there,” she added.

The seventh-grader at Imperial Valley Home School Academy seemed poised to move on to the upcoming quarterfinals on Tuesday, June 15, when she nervously breezed through the first two rounds, but was undone in the final seconds, when she misspelled the word “affixion,” spelling it “affiction” with just a few second left on the timer.

Asked whether she’ll ever use the word “affixion” outside the spelling bee world, Jaedillene laughed.

Jaedillene, whom her parents and others call “Jae,” was new to the national bee but did quite well in the initial rounds that were broadcast live on ESPN3. She spelled her opening word, “tullibee,” correctly and successfully defined the term “olfactory” in the multiple-choice second round.

(“Tullibee,” in case anyone was wondering, is “any of several whitefishes of central and northern North America,” according to the national bee’s official definitions.)

During Saturday’s marathon 11-hour, 23-minute broadcast, Jaedillene didn’t appear until almost nine and half hours into the program, and she appeared nervous yet confident.

Were you nervous, Jae?

“Yes, I was very nervous. My heart was pounding in my chest,” she said with a laugh.

Jae’s mom, Jessica Laurino, was proud of all her daughter has accomplished.

“We’re so proud of her … It’s a learning experience, especially in joining the National Spelling Bee,” Jessica said. “Hopefully, Jae will be inspired to join next year, but no pressure.”

“We’re proud of Jae in representing Imperial County, and how well she did,” said Janet Estrada, who was in charge of coordinating the local countywide spelling bee for the Imperial County Office of Education.

“We’re proud of her accomplishments and how far she was able to go,” said Estrada on June 13. Estrada is a curriculum coordinator for ICOE and is in charge of student events such as the spelling bee and county mock trial competition.

Jaedillene earned her spot in the national event by correctly spelling the word “effervescent” during the March 16 countywide bee, which was done virtually due to the pandemic.

“It was kind of exhilarating and exciting for me,” Jaedillene told this newspaper on March 22, at the ICOE office on Sperber Road in El Centro.

While Jae said she didn’t consider herself a highly competitive person, she told a reporter that she enjoys reading and, depending on the assignment, writing.

For her win, Jaedillene was presented with a trophy and several certificates of recognition during the March ceremony at ICOE hosted in her honor.

In the Imperial County competition, Jaedillene came out on top against 26 students from 14 Valley schools.

The national bee has traditionally been in Washington, D.C., but this year the finals will be at the ESPN Wide World of Sports Complex at Walt Disney World Resort near Orlando, Florida.

This year’s champion will receive a $50,000 cash prize, according to the E.W. Scripps Co., which stages the national competition.

Next
IVC Graduates Over 450, Drive-Thru Style