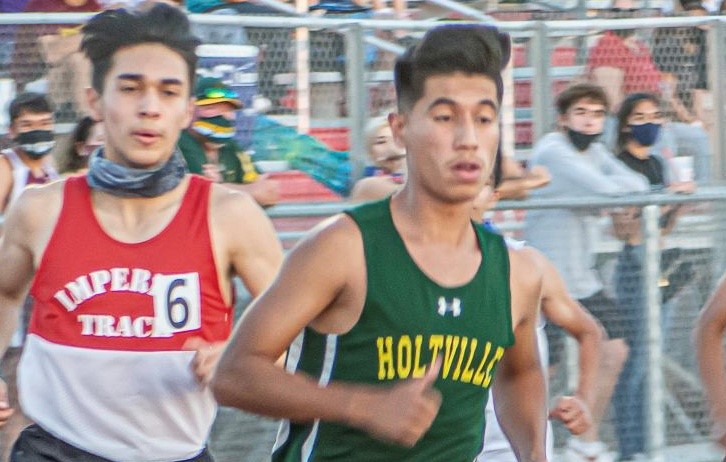 Jimenez almost pulled off a double-gold performance but came up two seconds short in the 1,600-meter race, falling to Sage Creek of Carlsbad’s Bryce Gilmore.

Holtville coach Gerardo Lara thinks the narrow loss in 1,600 motivated the senior to go all out in the 800.

“The 1,600 came down to a kick and normally Alan rises to the occasion but he just didn’t rise quite enough in this one, but I think it helped get him more focused and ready for the 800,” Lara said.

In the 800, Jimenez wasn’t going to be denied again, sprinting ahead of the pack and delivering the fastest split time of his running career with a 54-second first lap.

“My mentality going in was to run as if my life depended on it,” Jimenez said. “So the gun goes off and I make my way to the front and then begin to accelerate little by little. That last 200 meters I was just focused on the finish line.”

With his winning time of 1:56 in the 800-meters, Jimenez has qualified for the San Diego Champions Meet scheduled for Saturday, June 19, at University City High in San Diego. The Champions meet brings only the top nine finishers from Divisions I, II and III together to crown a San Diego Section champion.

Jimenez’s winning time in the 800 qualified him fourth among all 800-meter runners in the section, however the difference in time between the top six runners is less than two seconds, according to Lara.

“There are a lot of very talented runners in the event, it’s going to be something to see,” Lara said.

Jimenez will also be competing in the 1,600-meter race at the Champions meet on Saturday, June 19, qualifying with the ninth best time among all section competitors. His time of 4:20 is only four seconds off the top time in the section of 4:16.

Holtville freshman Lillian Strahm competed in the 3,200-meter race at the Division III meet and delivered a personal record of 12:48, shattering her previous best time by 30 seconds.

“Lilly came into the finals ranked 15th and she finished 11th so she upset some people at the event and she’s only a freshman,” Lara said. “I was expecting her to PR because of all the competition, but not PR by 30 seconds.”

Holtville senior Cierra Dammarell finished seventh in the shot put and wasn’t able to put up a PR at the championship meet.

Next
PHOTO GALLERY: Valley Grads Get Artsy with Custom Caps