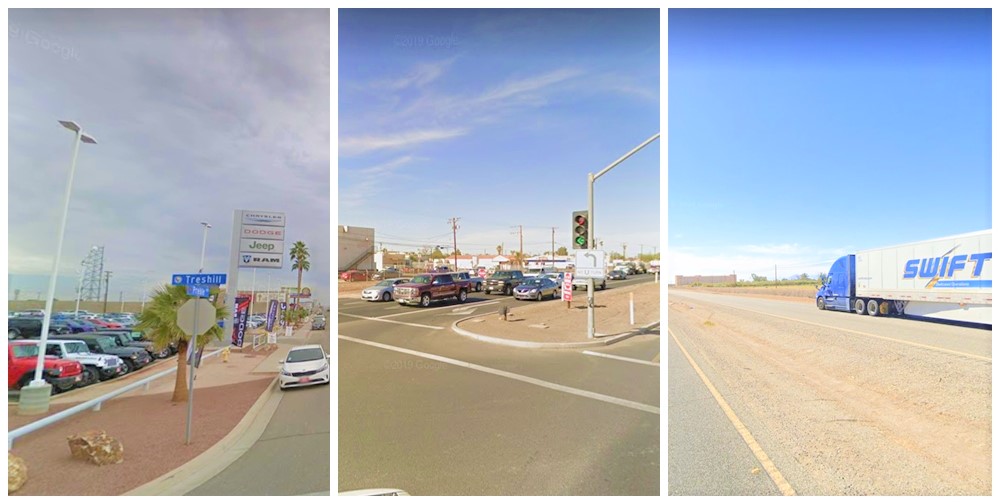 The city of Imperial’s Highway 86 Improvement Project, which runs from 3.5 miles from Treshill Road (left image) to Ralph Road (right image), has been allocated $3 million in federal funding. Highway 86 at Barioni Boulevard/Worthington Road is shown in the center image. | GOOGLE MAPS PHOTO ILLUSTRATION
In Regional News

IMPERIAL — The city of Imperial’s Highway 86 Improvement Project has been allocated $3 million from the federal INVEST in America Act (FAST Act Reauthorization Bill), according to city officials.

The award came June 7 when the U.S. House of Representatives’ Transportation and Infrastructure Committee selected the project as one of 1,473-member designated projects for funding as part of a FAST Act amendment, the city announced on Wednesday, June 16.

The city submitted the project through Congressman Juan Vargas, D-Chula Vista, under the Community Project Fund Application in April.

“We are very excited, and it just emphasizes we are on the right track as we prepare to take our community into the next phase of growth. We appreciate the support of our community stakeholders and the hard work of Congressman Vargas and his staff,” Mayor Karin Eugenio stated.

The funds will be used to further the design and engineering of the Highway 86 project, which is 3.5 miles in total length from Treshill Road on the south end to Ralph Road on the north.

The Imperial City Council awarded a contract for professional design services on the construction project to Chen Ryan Associates Inc. on May 19.

The original funding allocation of $850,000 came by way of Local Tranportation Authority/Measure D gas-tax monies. The project scope includes landscaping the center median and shoulder of Highway 86, constructing a multi-purpose trail, improving traffic flow, and studying how best to create a pedestrian and bicycle active transportation infrastructure that enhances connectivity, livability, and Americans with Disabilities Act access for all community stakeholders, the city states.

The additional funding will go toward technical studies and overall phased construction plans needed to move the project forward.

The application and project are supported by both the Southern California Association of Governments and Imperial County Transportation Commission as it meets the needs of Local Transportation Priorities and Community Projects, according to the city of Imperial.

Next
Fireworks Sales A Go for Chamber