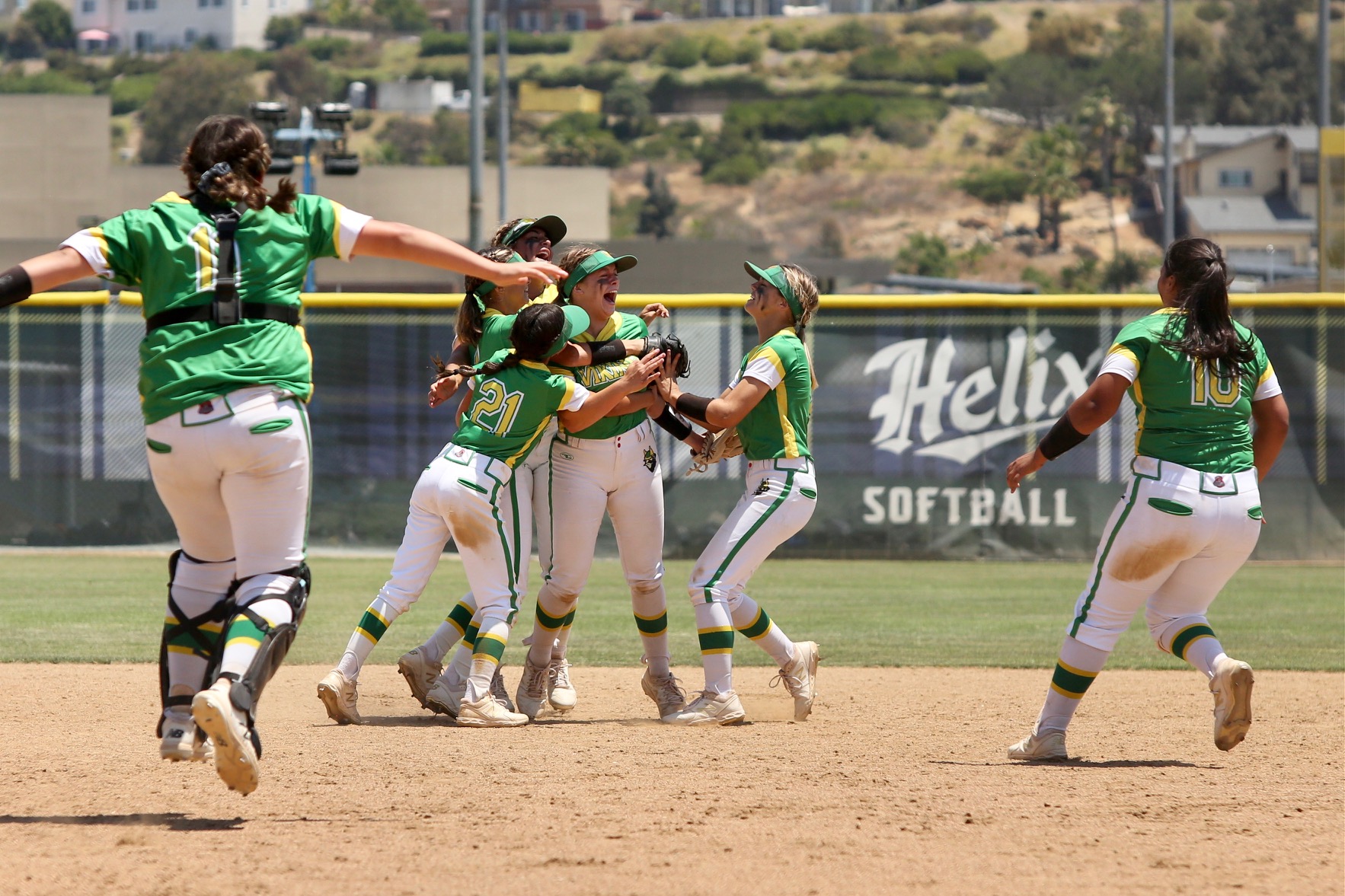 The Holtville High softball team celebrates after getting the final out of its 13-7 victory over Bayfront Charter in the CIF-San Diego Section Division IV championship game on Saturday, June 19, at Helix High School in La Mesa. | KATELYN BAEZA COURTESY PHOTO
In Featured StoriesSports

LA MESA — June 19 was a date every player on the Holtville High softball team knew very well. It’s a date engrained in their heads from the first practice of the season.

It became a date the Vikings will always remember as they powered past Bayfront Charter High of Chula Vista, 13-7, to win the CIF-San Diego Section Division IV championship at Helix High School. It’s the second CIF-SDS championship for the school, the first coming in 1998.

“Every day at practice we talked about playing on June 19,” said Melissa Snyder, Holtville’s fourth-year head coach. “All year long we talked about controlling the controllable. We couldn’t control if we were going to get a season or not, but once we got the green light, we knew we wanted to be playing on this day.”

While the team did its part and got to the Saturday, June 19 game, the Holtville faithful weren’t going to let them down, pouring into the Helix High School softball complex and making it feel like a home game for the second-seeded Vikings.

An estimated 250 Holtville fans turned the stands green and gold while Bayfront Charter had an estimated 50 fans cheering on the top-seeded Sharks.

On the field, the Vikings got the offense going with two outs in the top of the first inning when senior Emily Zarate walked and scored on a Bayfront Charter throwing error after freshman Kaitlyn Havens singled.

Havens took second on the throwing error and scored when freshman Brooke Strahm followed with a double. Sophomore, and sister, Kalli Strahm then singled to drive in Brooke for the quick 4-0 lead.

Kalli Strahm got the start on the mound for the Vikings and was happy she had a four-run lead before she even had to throw a pitch.

“It takes so much pressure off me to go out there with a lead like that,” said the 16-year-old Kalli. “I know that I don’t have to be perfect and if somebody gets on base that’s OK, because we already have a lead.”

Even though she didn’t have to be perfect, Kalli Strahm was pretty good through the first five innings, allowing just one run on one hit to the Sharks. She wasn’t overpowering with only two strikeouts, but she only had one walk and had faced only 18 batters through five innings.

In the top of the fifth inning, Holtville added four more runs with Zarate getting it started with another walk. Havens singled her to second then both runners moved up on a fielder’s choice groundout off the bat of Brooke Strahm.

Kalli Strahm then helped herself again with a two-RBI single and would come around to score when sophomore Sofie Irungaray singled.

With an 8-1 lead heading to the sixth, the Vikings were able to push across three runs to build an 11-1 advantage. Havens doubled and scored on a single by Brooke Strahm, who took second on the throw to the plate and later took third on a wild pitch.

Kalli Strahm and Irungaray followed with walks to load the bases for senior Zamara Gutierrez who delivered an RBI-sacrifice fly to center to score Brooke Strahm. Senior Lexis Smith then got her third straight single to drive in Kalli Strahm and build the 11-1 lead.

“I’ve seen the growth with the program the last four years,” said the 18-year-old Smith. “It was our mindset that had to change and stop letting IVL teams bully us. We knew we were capable of doing this and I couldn’t ask for a better way to go out as a senior.”

The Vikings were in position to win the Imperial Valley League championship with a two-game lead with three games left. The young squad picked the wrong time to slump and managed to score just two runs in the final three games, losing all three and dropping to second place.

“With the way we ended the IVL season I think it put a renewed focus on preparation and put is in a position to be where we are today,” Snyder said.

Trailing 11-1, Bayfront Charter wasn’t going to let the Vikings end the game on the “mercy” 10-run rule, battling back for four runs in the bottom of the sixth to close the margin to 11-5.

“I lost a little bit of my command in the sixth inning. Thank goodness we had a lead,” Kalli Strahm said. “At that point I was just trying to get outs and realized that one or two runs wasn’t going to matter.”

Holtville tacked on two runs in the top of the seventh with Kalli Strahm getting a double and RBI for her third hit and fourth RBI of the game. Havens also had three hits and scored three runs, as did Brooke Strahm. Zarate scored three runs without a hit, using two walks and a hit-by-pitch to get on base.

Up 13-5 going to the bottom of the seventh, the Sharks got two runs thanks to a walk and three straight hits. But it was the third hit that actually ended the game as the single to right went from Gutierrez to Walker to third baseman Demi Johnston who put the tag on a Shark baserunner to ignite the celebration.

With the win, Holtville moves into the Southern California Regional Division IV Championships and the Vikings learned on Sunday, June 20, they are the No. 1 seed and earned a bye into the semifinals.