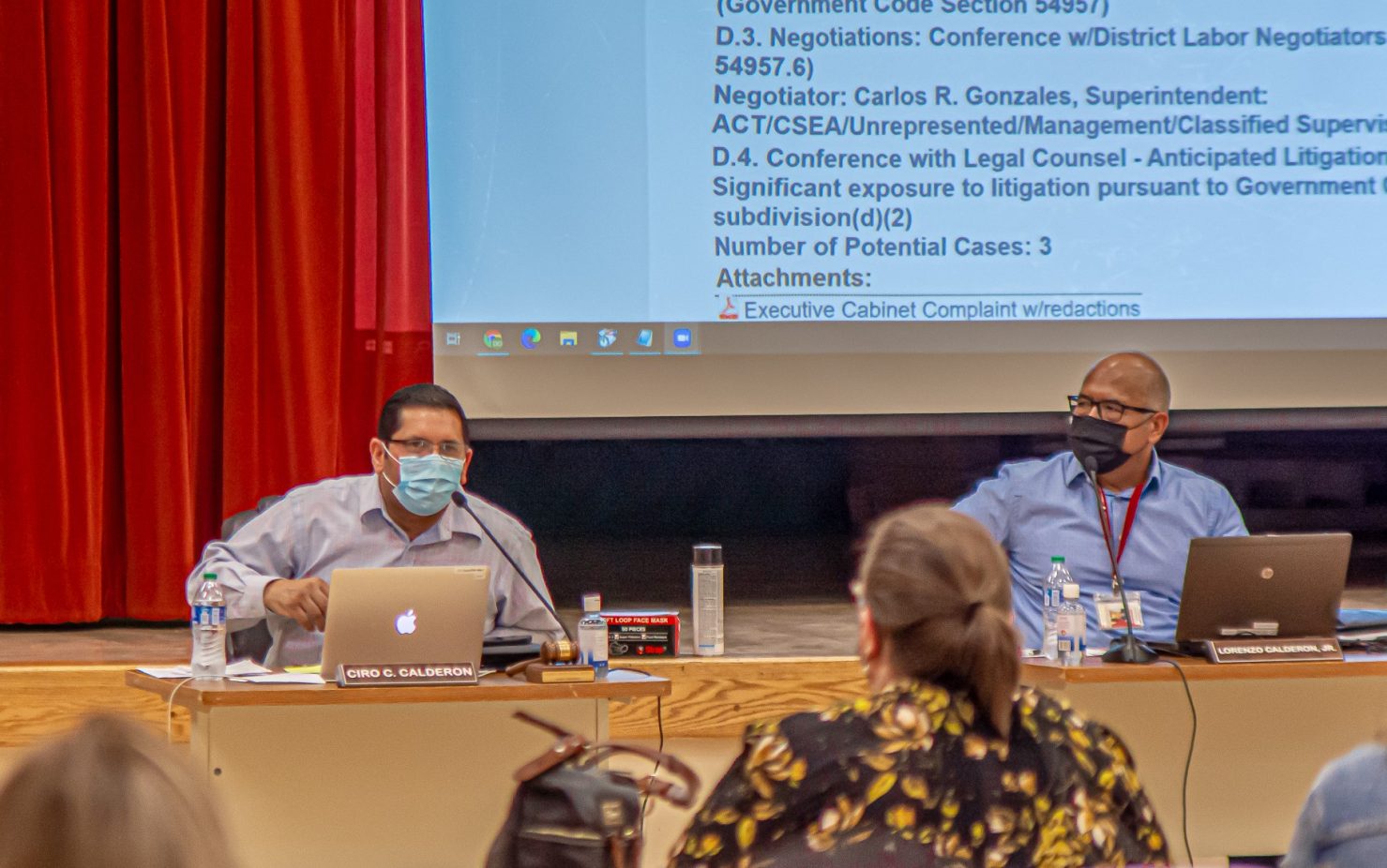 Calexico Unified School District board President Ciro Calderon (left) and Trustee Lorenzo Calderon Jr. listen during a special meeting of the board on Tuesday evening, June 22, at Cesar Chavez Elementary School. The board met in closed session to discuss 93 pages of allegations on misconduct that centered around the Calderons mostly. No reportable action was taken. | CAMILO GARCIA JR. PHOTO
Home
Education
In EducationRegional News

Employees Take Aim Over Contracts at Admin and Board During Special Meeting.

CALEXICO — The damning allegations that several Calexico Unified School District administrators recently made against four members of the board did not appear to weigh too heavily on the minds of faculty, judging by their public remarks.

Instead, the ongoing contract negotiations between the Associated Calexico Teachers union and the district was the predominant theme among the 13 district employees who did speak during the CUSD board’s special meeting of Tuesday, June 22. All had called for the district to agree to a salary raise, which has not occurred in four years.

Yet, one teacher did make a passing reference to the 93-page complaint the district’s superintendent and executive cabinet recently lodged against four members of the board and which accused them of creating a hostile work environment, falsely accusing district officials of corruption, conflicts of interest and discrimination.

During her remarks to the board, Melissa Gamboa said she was already tired from teaching a challenging school year and the current summer session at a wage lower than she contended is justified, and that reading the complaint only made her “more furious.”

She took particular issue with Superintendent Carlos Gonzales and the district’s executive cabinet solely focusing its complaints against the board and neglecting to bring to light any of the “injustices” that teachers and students have been subjected to.

And though she further accused the district superintendent and administrators of solely looking out for themselves, she did not spare the board any of her wrath, either.

“This district needs some deep cleaning,” the William Moreno Junior High math teacher said. “We need a new superintendent, board members and administrators that are qualified and put our students first.”

The board reconvened to open session at 8:13 p.m. and announced it had nothing to report from closed session.

The bulk of the complaints are lodged against board President Ciro Calderon and board clerk Lorenzo Calderon Jr., though it appears that Trustee Enrique Alvarado and recently elected Trustee Margarita Magallanes were added to the updated list of concerns on May 24.

Trustee Richard Romero is the only board member not accused of any unprofessional conduct.

“In an effort to improve overall District operations related to teaching and learning, the following violations and concerns are being shared along with a requested remedy and proposed plan of action,” stated a May 24 letter the district officials addressed to the district’s legal counsel.

One of the 10 listed remedies include potentially having the accused board members resign or removed from their current role. Another recommendation requested the hiring of a third-party investigator to examine each of the 55 allegations of wrongdoing, which board President Calderon said the board recently authorized.

“I’m not sure what’s going to happen or what the board will decide to do after the investigation is over,” Calderon said in a phone interview Monday, June 21.

Calderon said that many of the allegations against him date back several years and were previously resolved. He further denied the veracity of the latest accusations that have come to light.

The closed-session discussion fell under “anticipated litigation,” yet the two-page letter preceding the 93-page document of allegations, which include corresponding references of how the alleged misdeeds violate various school board bylaws and policies as well as state laws, were both made available as public documents.

Calderon is specifically accused of repeatedly and arbitrarily undermining Superintendent Gonzales’ authority, as well as that of the executive cabinet, spreading false information and defaming Assistant Superintendent Vega, who Calderon accused of authorizing classroom furniture purchases with a firm that Vega had a personal financial stake in.

“Mr. Ciro Calderon was not only reckless but intentionally made false statements to raise suspicion on another public official that he (Mr. Vega) was taking bribes,” the complaint stated.

Calderon was further accused of making public comments that suggested two maintenance and operations employees were stealing rye grass seed belonging to the district and that he was harassing a district teacher with whom he had previously attempted to have a romantic relationship.

In other alleged instances, Calderon is accused of not following the rules governing a public body’s open meeting laws, using his position to retaliate against district personnel, attempting to reverse course on board-approved personnel hirings and claiming that district administrators engage in nepotism.

Among other things, Trustee Lorenzo Calderon Jr. is accused of approaching the contractor tasked with Calexico High School’s construction of a new 16-classroom building in a “rather aggressive, threatening, and hostile manner,” the complaint stated.

Calderon was alleged to have attempted to investigate an incident where a high school administrator was stuck temporarily in the elevator of the new classroom building. Calderon has no authority as a board member to initiate such an investigation.

“Trustee Lorenzo Calderon Jr. is notorious for these types of actions in which he harasses district employees for information in order to attack administration and consultants,” the complaint stated.

His dealings with past superintendent Maria Ambriz and the former assistant superintendent of business services were also characterized in the complaint as being disrespectful and unprofessional, and allegedly amounted to gender discrimination.

Calderon Jr. was also the subject of a previous complaint by a department supervisor and for alleged harassment and for creating a hostile work environment.

Ambriz was eventually terminated by the board in October 2017, months before her contract ended. A subsequent wrongful termination lawsuit she filed was settled with the district.

The executive cabinet’s complaint further states that a former Dool Elementary principal and the current Calexico High School Principal Gabrielle Williams-Ballesteros had expressed concerns about their employment and were considering leaving the district due to being constantly questioned and intimidated by both Calderons.

The Dool principal, who was allegedly sexual harassed by Ciro Calderon, eventually did just that. She now works for the El Centro Elementary School District.

“District administrators have been accused of being retaliatory when in fact evidence shows that Trustees Ciro Calderon and Lorenzo Calderon Jr. have demonstrated retaliatory conduct towards administrators, staff, and service providers as explained in various areas of this document,” the complaint stated.

As for Trustees Alvarado and Magallanes, their names are included in a complaint that allege both sided with both Calderons, who are not related, in pursuit of questionable and unprofessional actions whose purpose was to discriminate against Gonzales.

One of those alleged actions include the manner in which the board presented Superintendent Gonzales with his evaluation in April, which reportedly did not allow him the opportunity to provide input.

Nonelected district officials have not responded to a request for comment.