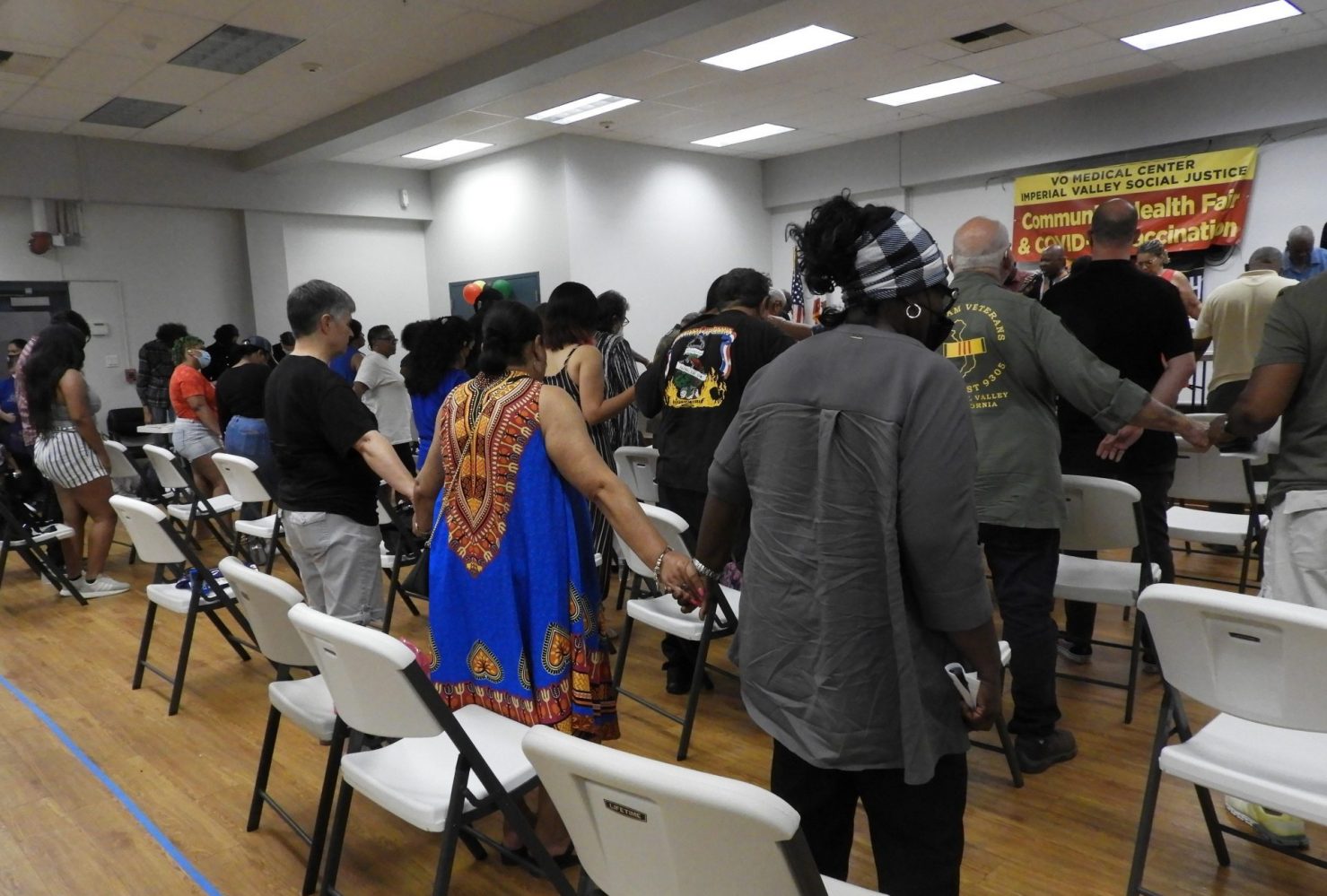 EL CENTRO — Long known as a significant holiday among the African American community in this country, Black Lives Matter Imperial Valley and the Imperial Valley Social Justice Committee have been preaching the gospel of the importance of Juneteenth for at least a decade.

On Saturday, June 19, as BLM and the Social Justice Committee, with the support of the city of El Centro, brought together members of the community to commemorate what is also known as Emancipation Day, or the moment in history when the final set of slaves in this nation were freed, it was done so with the knowledge that Juneteenth was now a nationally recognized holiday.

“Juneteenth is really a celebration of life, and liberty, and freedom for all people, of every walk of life,” said Pastor Terrence Sims of El Centro’s Johnson Chapel of the African Methodist Episcopal Church, after leading a group prayer on Saturday inside the El Centro Community Center. “And that is something for all of us to embrace and hold dear.”

Although President Abraham Lincoln’s Emancipation Proclamation had ended slavery on Jan. 1, 1863, the reality is, among the Confederate states, the shameful practice continued, and it wasn’t until Union Army Gen. Gordon Granger proclaimed an end to slavery in the most remote state in the Confederacy, Texas, on June 19, 1865, that the last slaves were freed.

Now, in communities across the country like the Imperial Valley, the Black community and others have long come together to celebrate life and freedom with prayer, food, dancing, and general revelry, and to recognize those in the community who continue to fight for freedom.

This year, Calexico City Council member Raul Ureña was recognized by the Social Justice Committee and Black Lives Matter as its pan of the year, honoring Ureña as an individual in the community who went above and beyond to protect the freedoms of others.

“It was an incredible honor; it was a shock,” Ureña commented. “But I am honored. I am honored that it’s this year. The year it is recognized as an official holiday in Imperial County, in the city of El Centro, everywhere.”

Ureña said he is actively working with the Social Justice Committee to help identify and chase changing ethnic demographics in the Imperial Valley to better understand the history and communities that reside in the county.

Saturday’s event saw all sorts of different offerings for the community from the artistic to the historical.

Brawley Mayor Pro Tem Sam Couchman and his wife, Wanda, brought Civil War-period artifacts to help educate those in attendance on what living in that era would have been like, and how the process of emancipation would have worked.

AB 1021 Made Toothless, But Will It Bite Again?

One booth, ran by Minister Felicia Carter and her granddaughter, Zinyay, sold jewelry to raise money for Zinyay’s education fund.

“We both sell this jewelry to fund her college,” Felicia shared. “So I felt, if we started early enough, that we won’t have to take out loans and that her college would be paid for.”

Zinyay’s father died when she was 2 years old, and so Felicia began to sell jewelry at events like this to try to give her the best life available.

“When we first started here in Imperial Valley, believe it or not, people didn’t know what Juneteenth was. Until we started to do it over and over and over again. We started to educate so people can understand the history of it,” he said.

Next
Death of Calexico Man Found Near Field ‘Suspicious’