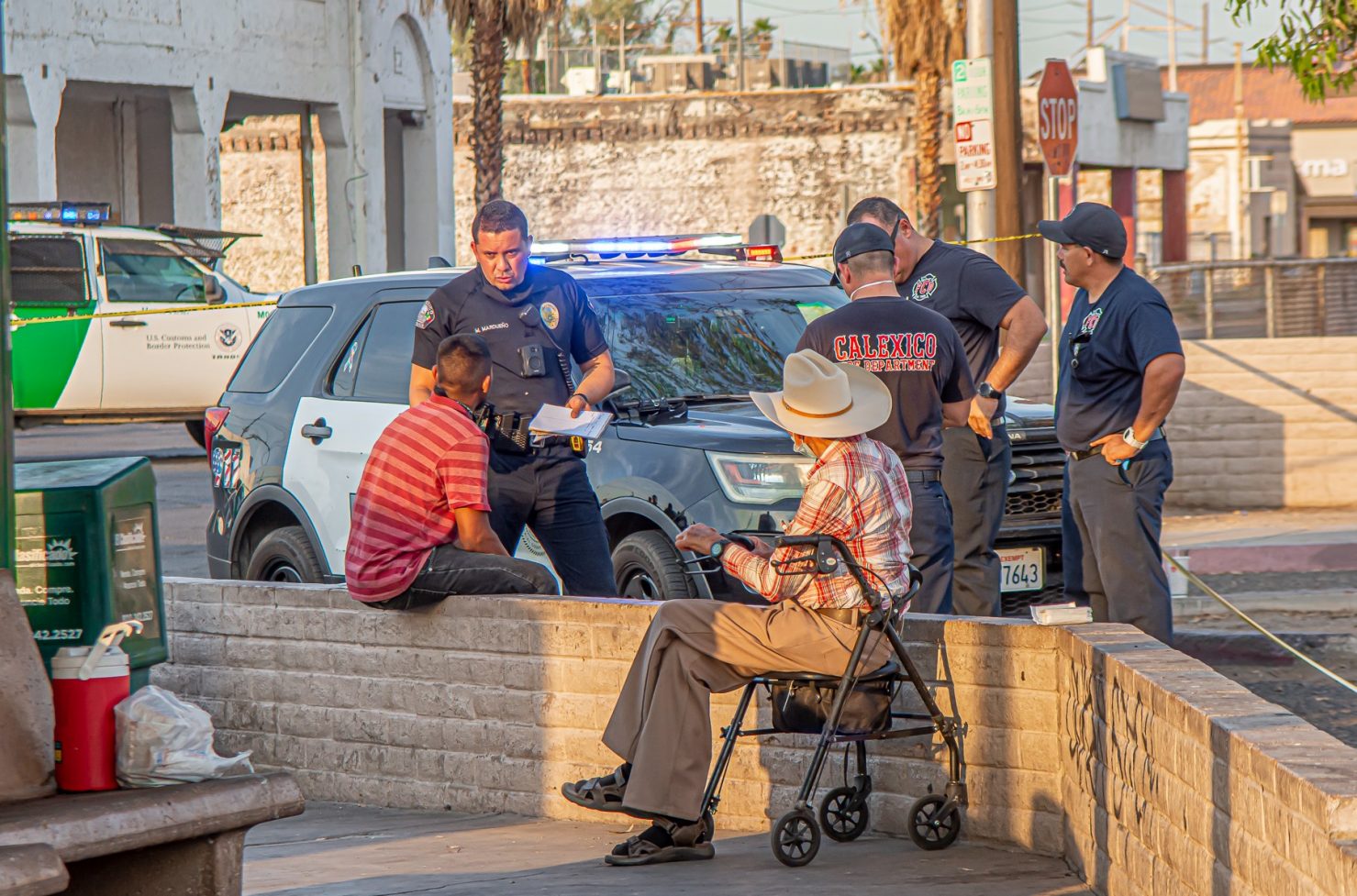 A Calexico police officer (left of center) is seen interviewing a man shortly after a 65-year-old homeless with a knife was shoot and killed by an officer at the bus stop at Third Street and Paulin Avenue on June 14. Police say there were as many as 13 to 14 eyewitnesses to the shooting. | CAMILO GARCIA JR. PHOTO
Home
Public Safety
In Public SafetyRegional News

Police Say as Many as 13 or 14 People Were Witness to Shooting.

CALEXICO — More than a week after a homeless man was killed by police at a busy bus stop in downtown Calexico, authorities have yet to find any of his family members and are now working with the Mexican consulate in attempt to locate kin.

The separate investigations into the shooting itself and the death of the 65-year-old Hispanic man might appear to be moving slowly, considering the incident occurred June 14, but police and sheriff’s officials gave no indication the timeline is out of the ordinary.

Calexico Police Chief Gonzalo Gerardo said the considerable number of witnesses to the shooting alone takes time, especially in the event that they need to be contacted more than once. He added some witnesses might still need to be located.

There were as many as 13 or 14 people who were eyewitnesses to the shooting, between the people on an Imperial Valley Transit bus that had just pulled up to the bus stop and those already at the bus stop or in the immediate area, Gerardo said in an interview on Wednesday morning, June 23.

The shooting occurred at what could be considered the height of the typical daily commute, around 6:11 p.m. on a Monday night at the corner of Paulin Avenue and Third Street, where high-traffic businesses like Donut Avenue are located.

Meanwhile, while police and coroner’s investigators do have the name of the man who was killed, his identity will not be released publicly until family members have been notified, and at the moment, authorities are at a dead end, according to Gerardo and Chief Deputy Sheriff Robert Benavidez.

The Sheriff’s Office is leading that end of the probe, and Benavidez said on Tuesday, June 22, that his department is hoping the consulate can help if the man was a Mexican national or has family in Mexico.

Although police are not really involved in this part of the investigation, Gerardo said they have assisted. When officers went to the man’s last known address in Calexico, no one there had ever heard of him.

There had been some talk in the days after the shooting that the man might have been one of the handful of Mexicali farmworkers who sleep on Calexico’s streets rather than return home each day, but that does not appear to be the case.

Gerardo said police have interviewed numerous people in the area and have been told the man did like to frequent that bus stop and drink alcohol there every so often.

What exactly happened that led to the man’s shooting by police is unclear and no additional information has been released by police or sheriff’s officials. Police are leading the internal investigation into the shooting and have placed the officer, who has not been identified, on paid administrative leave.

On Wednesday morning, Gerardo said that officer would likely remain off duty through the duration of both the department’s internal review and the investigation by the Sheriff’s Office and Imperial County District Attorney’s office.

The shooting stemmed from a 911 call at 6:11 p.m. from what Gerardo has said was likely the bus driver, who also hit some sort of “panic” button on the bus that activated an emergency digital marquee on the outside of the bus.

A fight was taking place at the bus stop between the 65-year-old and another reportedly homeless man when the bus pulled up. Gerardo has said the man who was shot had a knife and slashed the forehead of the other man, which eventually led to the police being called and the man being fired upon.

A person who claimed to be a witness to the fight that preceded the shooting stated on a social media post that the man with the knife armed himself after he was being beaten up by a younger individual. The witness also said people at the scene had separated the two men before police arrived.

What happened after that gets murky, and no further information has been released by authorities.

A press release issued by the Police Department the morning after the shooting stated the 65-year-old man had a knife “tethered” to his wrist by some sort of cord and he would not comply with orders to put down the weapon.

He was shot more than three times, Gerardo has said, but he would not say how many times. Three shell casings were seen marked at the bus stop by bright orange paint, but the chief acknowledged that more than three shots were fired.

Benavidez on Tuesday would not reveal any findings in the death investigation or any information about wounds to the body.

He added that sheriff’s officials sat down with the District Attorney’s office on Tuesday and both sides have agreed not to release any information for the time being.

Assistant District Attorney Heather Trapnell said on Wednesday morning that the DA’s office would not be involved in any release of information, if it even does release any, until the Sheriff’s Office has finished its probe and submitted a report to the DA.

It’s at that time such a report would be reviewed to determine whether any charges would filed against the police officer.

The shooting — as well as the events leading up to it that involved police — were captured on the two responding officers’ department body-worn cameras.

Gerardo said in a story last week that by law, the department has 60 days to release the body-cam video but can apply a court-ordered extension of up to 180 days if its release could hinder an investigation.