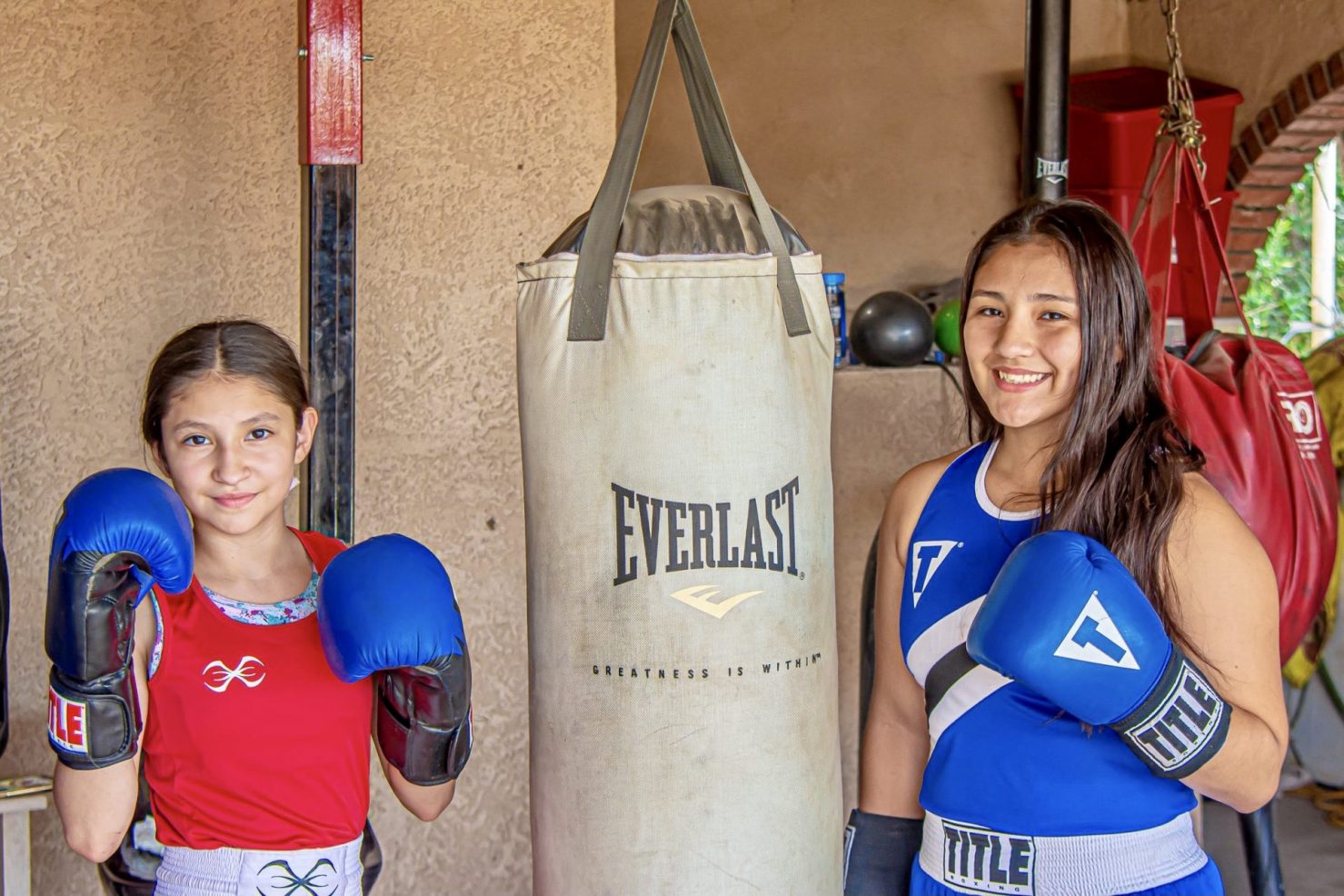 Calexico’s Yaya Oceguera (left) and her sister, Liz, are heading to the Junior Olympics in Lubbock, Texas, in July to try to box their way to gold medals. According to USA Boxing, Yaya, 11, is ranked No. 1 in the 70-pound bantam division, while Liz, 16, is ranked third in the 132-pound junior women’s division. | CAMILO GARCIA JR. PHOTO
Home
Sports
In Sports

Top-Ranked Youth Boxers Not Afraid to Throw the First Punch.

CALEXICO — What started out as a weight-loss and confidence-building activity for their daughter has turned into the family passion for the Ocegueras.

Back in 2016 when their daughter, Liz, was only 11 years old, Francisco Oceguera and Ester Savellano decided to enroll her in a boxing gym in an effort to help Liz drop a few pounds and learn to defend herself against bullying she was experiencing at school.

Little did they know Liz would love it from the moment she began, pull her younger sister, Yaya, into it with her and have the family traveling halfway across the country for U.S. National Championships and Junior Olympics.

“She (Liz) was 11 and she was the typical pre-teen that didn’t want to go out and do anything,” said 32-year-old Ester Savellano, Liz and Yaya’s mother. “She was being bullied at school and after the other kids found out she was boxing, they didn’t bother her anymore.”

Liz, now 16, and Yaya, 11, competed in the U.S. National Championships in Shreveport, La., back in late March and are heading to Lubbock, Texas, for the Junior Olympics from July 7-17.

In Louisiana, Yaya won the 70-pound bantam division, going 3-0 in her three fights and is now ranked No. 1 in the division by USA Boxing. The championship match against Rosie Sotelo, also of California, was young Yaya’s toughest of the competition.

“That last fight was kinda hard,” said Yaya, who is going into the sixth grade at Kennedy Gardens Elementary School in Calexico in August. “I kept throwing punches and doing what my dad told me to do to try to win the fight.”

Yaya started boxing when she was just 6 years old, only so she could do whatever big sister Liz was doing.

“I like boxing and training with my sister,” Yaya said. “It’s fun to hit people.”

Liz took to boxing immediately when her parents signed her up at age 11. There was something about the adrenaline rush she got that made her feel good.

“It’s a good way to get my anger out,” said Liz, who will be a junior at Calexico High School in August. “And it’s fun that you get to punch people in the face.”

At the event in Louisiana, Liz only had one fight due to the lack of participants in her 132-pound junior women’s division. She is currently ranked No. 3 by USA Boxing heading to the Junior Olympics.

“I’d say my strengths in the ring are my head movement and my power punches,” Liz said. “Defense is important, but if you punch hard enough, they might not hit you back.”

Francisco Oceguera, 37, has gotten his USA Boxing coach’s license and trains both of his daughters. They are on a strict daily training schedule, but the girls still find time to do what girls love to do, watch and make TikTok videos.

“Every morning we run at about 5 a.m. or 6 a.m., then we eat and go to school,” Liz said. “Then we come home, eat, watch some videos and then train in the evening and run again. Then repeat the next day.”

Both Liz and Yaya were to be recognized for their boxing successes in March at the Calexico City Council meeting on Wednesday, June 23, with the council wishing the girls success at the upcoming Junior Olympics in Texas.

Liz sees boxing in her future plans and said it is her goal to make the U.S. Olympic women’s boxing team for the 2024 Olympics in Paris. Of course, a gold medal is what she is aiming for and then afterward, she says she’d like to try her hand at professional boxing, but definitely not mixed martial arts.

“I find that intimidating,” Liz said. “I would rather go out and get my nose broken than break my legs.”

Ultimately Liz said she’d like to become a veterinarian and help animals.

“I want to study veterinary science,” Liz said. “We have dogs and cats and birds and ever since I was little, I told my parents I want to be a vet and help the animals.”

As for mom, Ester Savellano said she used to get a lot more nervous when her girls would climb into the ring, but now she knows it’s just part of who they are.

“I still get nervous, but I just wish them the best because I know they work really hard and they are so dedicated to it,” Savellano said. “I’m just very proud of them.”