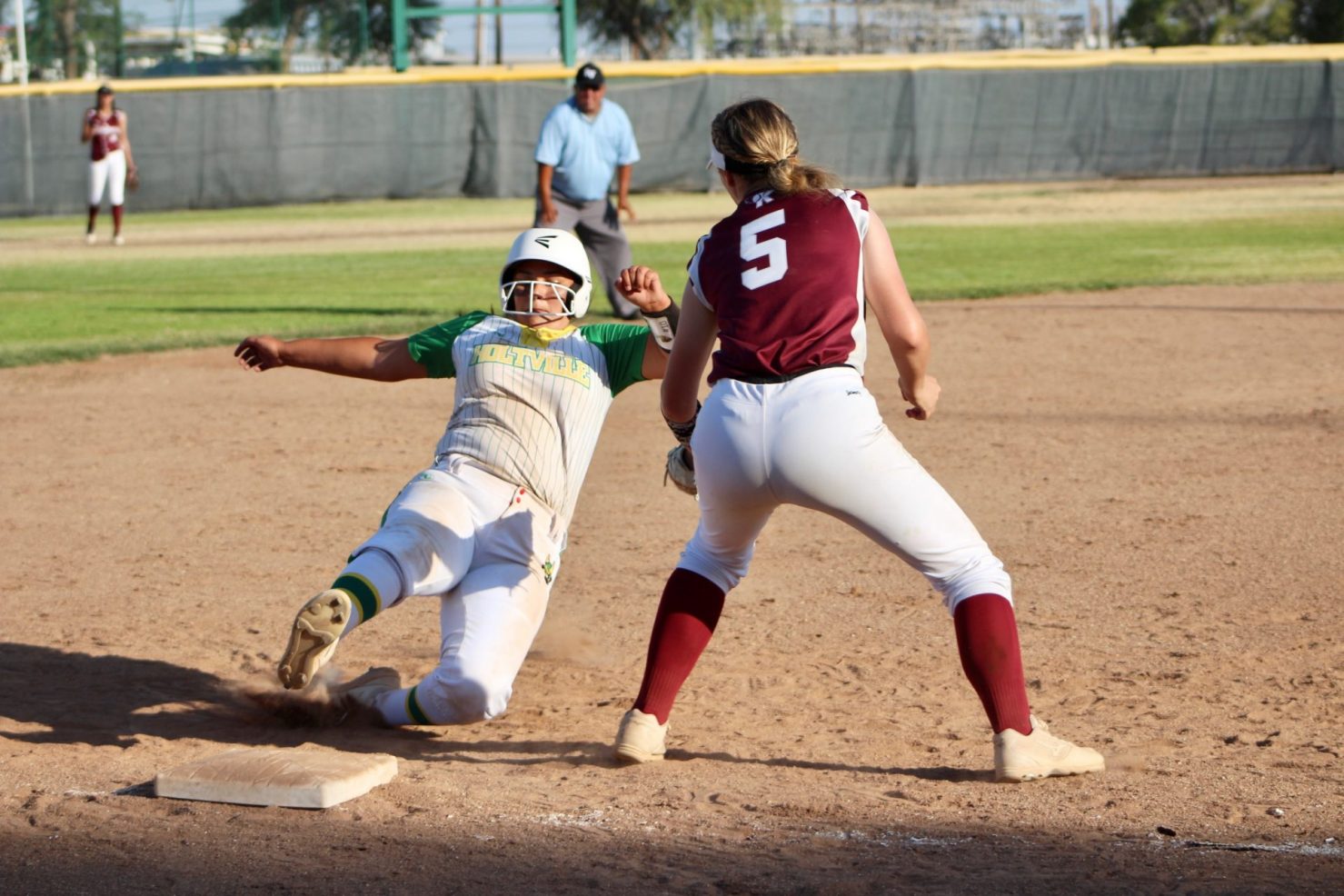 HOLTVILLE — After not winning a CIF-San Diego Section championship for 23 years, the 2021 Holtville High School softball team is trying to get all the hardware it can.

On Thursday, June 24, the Vikings hosted Kearny of San Diego in the Southern California Regional Division IV semifinals, overcoming a slow start to beat the Komets 14-4 in five innings.

With the win, top-seeded Holtville will host the SoCal Regional championship game at 6:30 p.m. Saturday, June 26. The Vikings, CIF-SDS Division IV champions, will face third-seeded Highland High of Bakersfield, an 11-1 winner over Gardena in the other semifinal game on Thursday.

Thursday’s game saw Kearny, the CIF-SDS Division V champion, jump out to a 3-0 lead in the second inning thanks to two singles, a walk and two Vikings’ errors.

Johnston filled in for head coach Melissa Snyder who is out of town for her sister’s wedding and will also miss Saturday’s championship game.

“The girls had to adapt. Now they are getting signs from me at first base instead of Melissa at third and now our freshman catcher is calling pitches instead of Melissa so it just took a little while for the girls to adapt to the new situations that were thrown at them today,” Johnston said.

Holtville made it a 3-2 game in the bottom of the second inning when Brooke Strahm walked and her sister Kalli Strahm followed with another walk. Both moved up on a passed ball and then starting pitcher Zamara Gutierrez delivered a two-RBI single to right to get the Vikings on the board.

(Read about this year’s cousin combo dominating the infield for the Vikings.)

“We knew we had given them those early runs but all year we had a ‘so what, move forward’ mentality. We knew we had a lot of game left,” said sophomore shortstop Kamryn Walker. “When Zamara got that hit and drove in those runs it really picked us up and got our momentum back.”

Kearny added a run in the third inning to increase its lead to 4-2, but the bottom of the third is when Holtville sent 12 batters to the plate, scoring eight runs to take a 10-4 lead, and keeping the Komets on the field and in the sun for about 35 minutes.

“I think the heat really took a toll on them (Komets),” Walker said. “You could tell after the second inning they were just drained.”

Up 10-4 after the third, Holtville was able to plate four runs in the bottom of the fifth to end the game via the 10-run ‘mercy’ rule. Senior Lexis Smith started the rally with a single, followed by a walk to Walker and Johnston reaching on a hit-by-pitch.

With the bases loaded, senior Emily Zarate delivered a double to the gap, plating all three runs to make it 13-4. Zarate would steal third base and score on a wild pitch to end the game.

Gutierrez pitched the first three innings for the Vikings, giving way to Kalli Strahm in the fourth inning.

“With the 4 p.m. start time I knew it was going to be tough on any pitcher so we knew we had Kalli that could come in and if she ended up getting overheated we could always go back to Zamara,” Keriann Johnston said about using both pitchers.