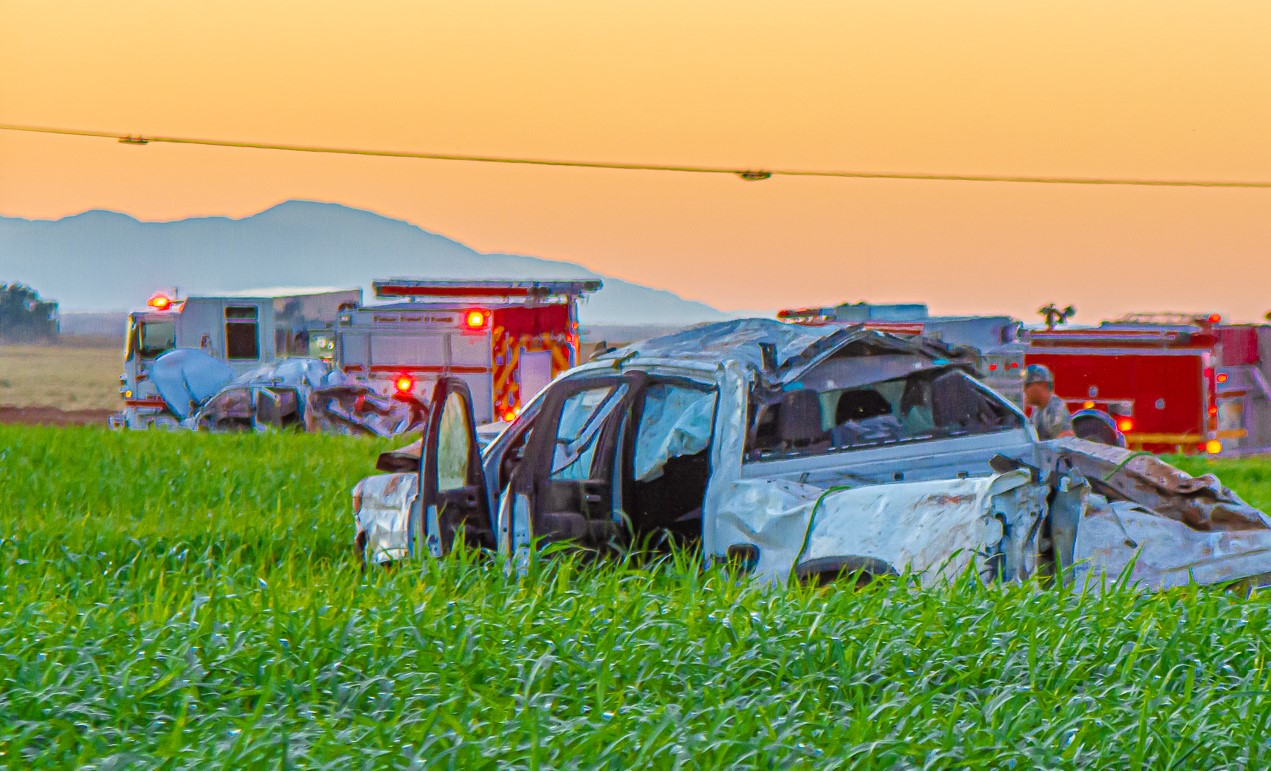 The Imperial County Sheriff’s Office Was Expected to Issue a Press Release on the Collision on Monday Morning, June 28.

IMPERIAL — A collision that took the life of a young deputy and left two ag workers recovering in a Palm Springs hospital appears to have been the result of the deputy driving through a posted stop sign at a high rate of speed and into the path of the pickup packed with crew members returning from work Saturday evening, June 26.

Several witnesses to the collision as well as those close to occupants of the pickup that struck the deputy’s cruiser laid out the chain of events, but details into the collision itself have not come from any official sources as of Monday, June 28.

The Imperial County Sheriff’s Office issued its first press release regarding the wreck that killed 25-year-old Deputy Anthony Redondo, reportedly of Imperial, on Monday, but the details contained within were not about the collision invesigation.

Rather, the Sheriff’s Office stated that Redondo was responding to a “mental health call within the area of Seeley” reported around 7:15 p.m. The collision occurred while Redondo was en route.

The release stated the deputy was sworn in on Sept. 11, 2020. Chief Deputy Robert Benavidez confirmed that Redondo has been out the field-training phase of his hiring for about four months, meaning he was cleared to patrol on his own as a newer hire.

Information from the Highway Patrol did not shed any additional light on the collision, and the local CHP press release made no mention of which vehicle collided with the other.

That probe could take anywhere from two to “several months,” “especially with this crash since a law enforcement agency is involved,” Platero said.

Redondo’s identity was first made public when the Sheriff’s Office paid tribute to the fallen deputy with an “End of Watch” post on its social media sites on Sunday morning, confirming that Redondo was on duty at the time of his death. (Further updated information about Redondo is toward the end of the story.)

How the collision unfolded at the intersection of Aten and Forrester roads, west of Imperial, came into sharper focus on Sunday, when the wife of the driver of the white pickup involved in the collision and a relative of a passenger in the same truck who asked not to be named provided a number of details.

The driver of the pickup was 33-year-old Manuel Orozco of Seeley, who himself sustained injuries but only minor ones caused by the seat belt that did not require hospitalization. He was the foreman of a crew working for CMC Harvesting Inc., who had spent the day driving MacDon cutters and combines in fields in the Niland and Calipatria areas, said Orozco’s wife, Liliana Ruiz.

Orozco couldn’t speak on Sunday because he was at the bedside of his younger brother, 27-year-old Andres Orozco, also of Seeley, who was sedated with breathing tube at Desert Regional Medical Center in Palm Springs with water in his lungs and other minor injuries resulting from the collision, Ruiz said.

Andres Orozco was actually in good condition, Ruiz said, but he kept being combative when awakened due to the breathing tube and other hospital apparatus.

It was touch-and-go initially, Ruiz said, as Andres was not breathing when he was found by his CMC co-workers and his brother, Manuel, who Ruiz said performed cardio pulmonary resuscitation on Andres and revived him before first responders arrived.

Also at Desert Regional was another passenger in Manuel Orozco’s pickup, a co-worker named Jesse Ruelas, 31, of Imperial, who her husband said was in good condition with a broken shoulder and broken elbow.

Jesse and Andres were among the four of six passengers in the truck that were ejected and subsequently pinned beneath Manuel’s 2021 Chevy Silverado, Ruiz said, both of whom had to be dug out with shovels by co-workers that were following behind the pickup at time of the collision, which was around 7:30 p.m., and witnessed the crash unfold in front of them.

Also ejected from the truck and pinned along with them was a teenager named Trent Cox, an Imperial High School senior sitting in the back seat whose best friend, Justin, helped dig him out. Cox, who is 18, suffered bruising and was taken to Pioneers Memorial Hospital by ambulance, the Highway Patrol reported.

Andres Orozco and Jesse were each airlifted from the scene and flown to the Riverside County trauma unit at Desert Regional. Two other men in the pickup were transported to El Centro Regional Medical Center by ground ambulance, 27-year-old Sergio Ruelas of Imperial and 18-year-old Luis Amafillas of Imperial, both with minor injuries, Highway Patrol reported.

They were all part of crews in multiple vehicles hauling trailers and cutters/combines that were returning to the CMC Harvesting shop on Brockman Road between El Centro and Seeley when the collision occurred.

Ruiz’s recounting of the collision, by way of her husband, corroborates what three field workers in the area told a journalist at the scene on Saturday night, that the sheriff’s deputy appeared to have run the stop sign at the intersection resulting in the collision with the pickup, which caused both vehicles to flip into a Sudan field south of Aten and west of Forrester.

Manuel Orozco was driving south through the intersection on Forrester hauling a trailer with diesel fuel and a compressor back to the CMC shop when the deputy reportedly drove his westbound SUV through the Aten intersection into Manuel’s path, Manuel told Ruiz.

Ruiz said he tried to stop but could not.

Dusk at the time of the collision, no one involved that has been interviewed can recall seeing either headlamps lit up on the Sheriff’s Office SUV, or the light bar atop the vehicle flashing. This comes from Manuel through Ruiz and the three field laborers in the area.

It is not known at this point whether the deputy might have been responding to a call for service.

The deputy’s SUV was struck on the passenger side by the pickup, separating the trailer from the truck and sending the truck end over end into the field and the trailer into what appeared to be a dirt berm on the side of the road, Ruiz said.

She said her husband did not know what happened to the deputy’s SUV at that point. Before first responders arrived, CMC crew members following behind searched through the tall grass for their co-workers, Ruiz said.

That was also the case for the sheriff’s deputy, according to scanner radio traffic from Saturday night, as first responders could not immediately locate the deputy in the Sudan.

A visit back to the site of the crash on Sunday midday showed evidence that spoke to the tragedy of the scene where the deputy’s SUV came to rest just south of Aten and west of Forrester. Red flags left planted in a dirt ditch were marked with the deputy’s items of equipment that flew out of vehicle and numerous pieces of molding were left behind, all scattered in numerous directions within about 30 yards of the SUV, hinting at the violent nature of the collision.

It was clear on Saturday night and through Sunday that the law enforcement community had been quick to rally around it’s fallen brother. Deputies at the crash site on Saturday could be seen in the background of photos appearing to embrace and console each other.

This was an especially significant loss for many deputies and longtime Sheriff’s Office personnel, as Chief Deputy Benavidez confirmed that Redondo was the stepson of sheriff’s Sgt. Eric Frazier, head of patrol operations for North County, based out of the Brawley substation.

A coroner’s transport vehicle arrived at the crash site around 8:50 p.m. Saturday, and a law enforcement escort of at least a dozen vehicles ranging from sheriff’s, police, fire, and California Highway Patrol cruisers left the scene of the accident following the coroner’s transport at 9:20 p.m.

An autopsy on Redondo’s remains was completed on Monday morning, and Benavidez said an honor guard will remain watch on Redondo’s body until he is laid to rest.

Funeral arrangements are pending but would likely be confirmed by Thursday, July 1, Benavidez said.

The chief deputy said no cause of death is being released at this time, and Redondo did not have any children nor a wife.

“The Imperial County Sheriff’s Office would like to express our sincere condolences to the family of Deputy Anthony Redondo who died as a result of a traffic accident last night while on duty. RIP Anthony,” the department’s End of Watch posts read on Sunday morning.

“R.I.P. Deputy. You were my neighbor, I will never forget our talks and your love for the career. God Bless, we will take it from here. The Calexico Police Department Staff sends our most heart felt condolences to your immediate family and the ICSO Family. Chief Gonzalo “Chalo” Gerardo.”

The crash is being investigated by the California Highway Patrol, reportedly the San Diego-area Border Division’s Multidisciplinary Accident Investigation Team. A Highway Patrol officer contacted at the El Centro office on Sunday morning said all information would be flowing through the Sheriff’s Office.