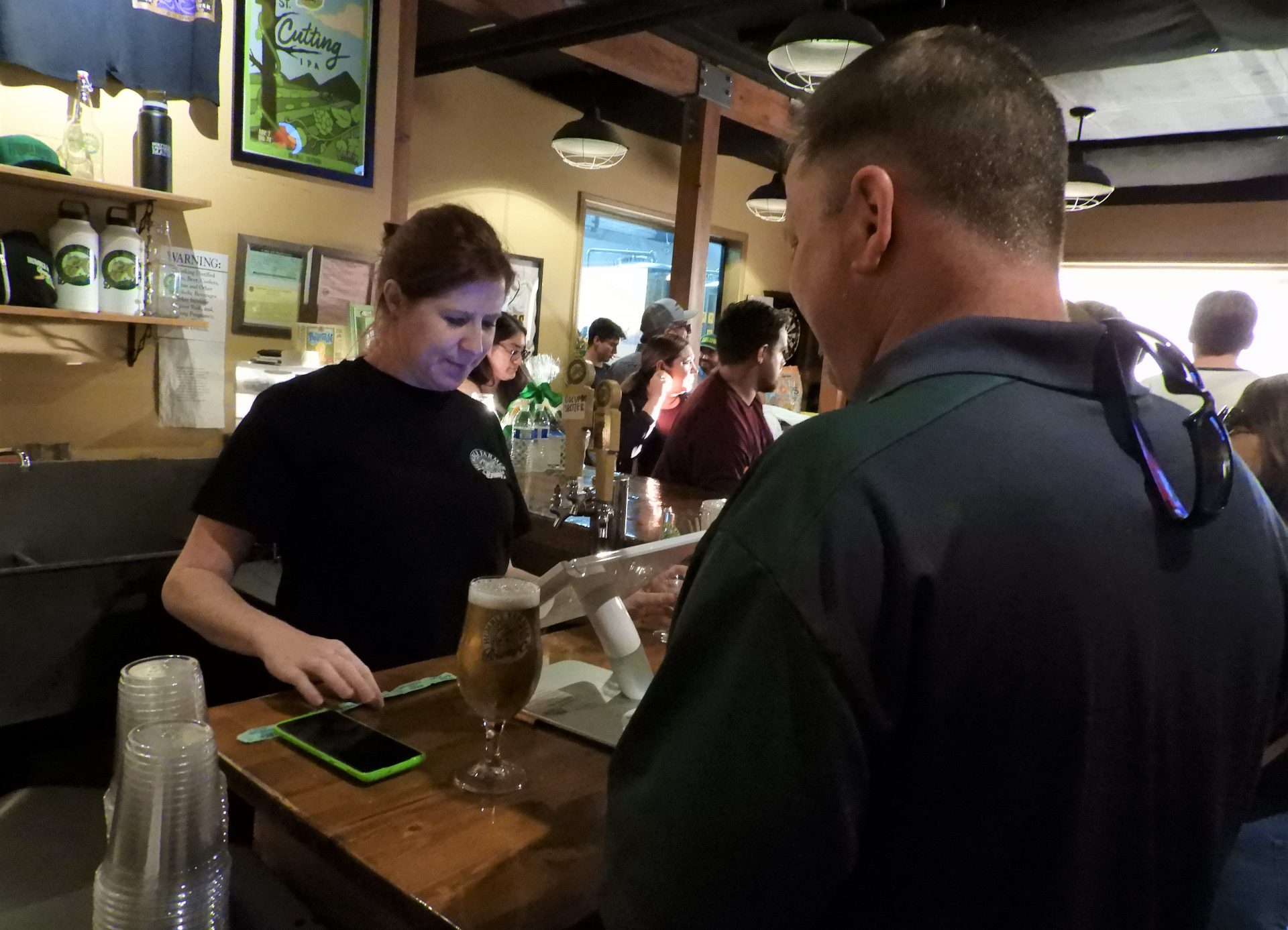 HOLTVILLE — Tucked away down a small street in Holtville, Humble Farmer Brewing Co. invited friends and family to a lowkey reopening of its taproom on Walnut Avenue, its original location where the magic happens.

On Thursday evening, June 24, the Holtville Chamber of Commerce assisted in making an event of it, with a ribbon-cutting to celebrate being able to serve customers at full capacity following the lifting of most pandemic restrictions in California after June 15.

As guests sipped pints of craft beer brewed on the premises and noshed on sandwiches and wings, the importance of the smallish gathering was not lost on those in attendance nor on the proprietors of the brewhouse.

“We had to close down the taproom completely,” said co-owner Eric Strahm, one of five partners in the business. “Luckily, our Imperial location has a kitchen, so we were able to stay open there and sell food and cans to go.

“Almost all of the staff had to go on and off work. Thankfully, we have almost everyone back now,” Strahm said.

The Holtville site is where the beer is brewed and serves no food, only the brew. The cans and kegs are shipped to the brewery’s pub-style location in the heart of downtown Imperial.

Kami Huddleston, manager of the taproom, echoed Eric’s feelings. She, like many most of the staff at Humble Farmer, had to go off work while the taproom was closed.

“We were down to only one cook,” Kami said. “But we are back now. I love being back at work. I have my regulars that I get to see and visit with. I love my job, but it’s the people that are really important. And the beer.”

The locals who congregated for the reopening were happy to see Humble Farmer Brewing Co.’s taproom back in action.

“It really represents our community and is made from organically grown ingredients from local farms,” Holtville resident Chase Schaffner explained. “And it’s really tasty, too.”

Kylee Ruddell, another Holtville resident, excitedly shared how she felt about the reopening.

“It’s a great place. It’s great to have another place besides the Donut Shop to be able to go to drink and to socialize,” she said.

“I really love it, it’s awesome,” George Gomez said as he sipped on his amber-colored beer. “There’s not a lot to do in Holtville, so having some things to do like this means a lot. We can go here instead of going all the way into El Centro.

“I’m glad something like this is open in our town,” Gomez added.

Strahm said he and his partners put tremendous effort to get the brewery started, spending a year planning the opening. He said they were not about to give up because of a pandemic. In order to survive COVID, Strahm said the company adapted its way of doing business.

“We started making half batches because we couldn’t sell a whole batch before it went bad. We had a few places like Inferno (in Brawley), who kept us on tap, and that helped,” Eric said. “We also began canning way more than we had been previously, so we could continue to sell our beer to go. We also got the grants the county were offering and some of that paycheck protection money to keep us afloat.”

Humble Farmer Brewing Co. was not the only Holtville business to struggle. Rosie Allegranza, executive manager for the chamber, said things had to change for a lot of businesses and for the chamber itself.

“COVID was hard on Holtville. There are several restaurants that still haven’t opened back up, and we’re not sure if they’re going to. The chamber itself was unable to hold the Carrot Festival last year, which is 40 percent of our annual revenue,” Rosie said. “See, that’s why the ribbon-cutting is so important, to tell people that not only is Humble Farmer still here and open, but so is the chamber.”