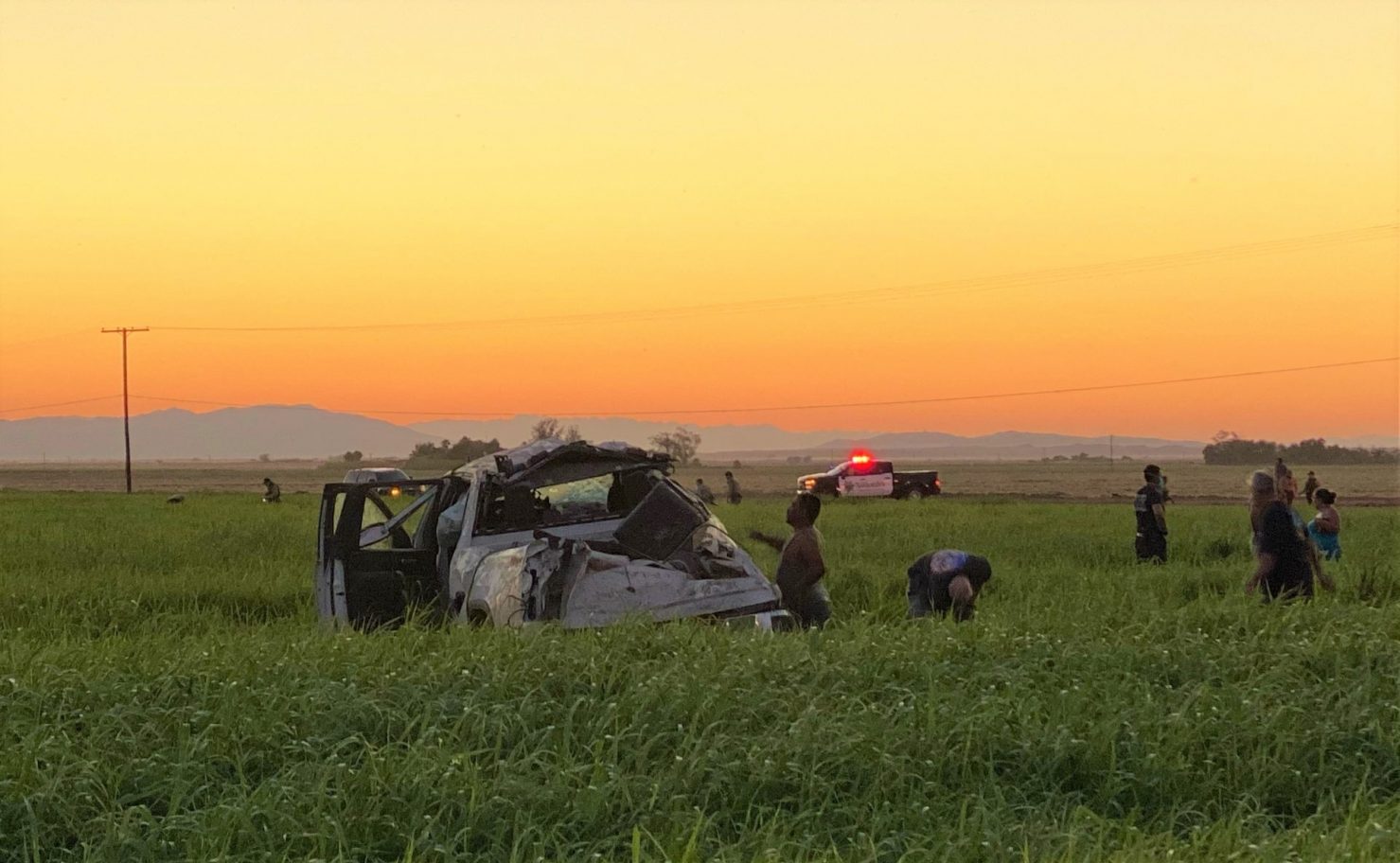 An Imperial County Sheriff’s Office deputy was killed on Saturday evening, June 26, when his Chevy Tahoe collided with a pickup (shown), both of which ended up in a field west of Forrester Road and south of Aten Road west of Imperial. | CAMILO GARCIA JR. PHOTO
Home
Public Safety
In Public Safety

At Least Three Injured Persons Were Transported from the Crash Site at Aten and Forrester; Two By Chopper, One By Ambulance.

IMPERIAL — An Imperial County sheriff’s deputy was killed during a multiple-injury collision west of Imperial on Saturday evening, June 26, in which several people were injured, some airlifted from the scene.

“The Imperial County Sheriff’s Office would like to express our sincere condolences to the family of Deputy Anthony Redondo who died as a result of a traffic accident last night while on duty. RIP Anthony,” the department’s statement reads.

At least three people were injured in the two-vehicle collision, which was reported around 7:40 p.m. near the intersection of Aten Road and Forrester Road west of Imperial.

Two people were serious enough to have been airlifted from the scene and one was apparently transported from the area by a ground ambulance.

First responders could be seen rendering aid to one person in the tall grass of the field into which both vehicles overturned. That field was south of Aten Road and west of Forrester.

Three fieldworkers who had just finished for the evening near the crash site gave eyewitness accounts that the deputy was traveling at a high rate of speed and ran a posted stop sign at the intersection before the collision occurred. The witnesses first stated that the deputy was driving a pickup, but they apparently misidentified the vehicle.

So far an official chain of events has not been released by the investigating agency, presumably the California Highway Patrol, which had not returned calls late Saturday nor Sunday morning.

Radio scanner traffic reported something similar to what the witnesses said, stating a collision followed in which both vehicles ended up in a field and multiple occupants were ejected at the scene, with one possibly trapped beneath a vehicle. Scanner reports did not state which vehicle ran the stop sign but that the collision was between an “ICSO DPTY VS CHEV TAH” and “WHI PK VS SMALLER CAR.”

While both vehicles overturned and ended up in the field, from a closer examination of the photos it appears the sheriff’s deputy was in the Chevy Tahoe, which came to rest closer to Aten. The unmarked pickup came to rest farther south in the field along Forrester.

There were reports that dispatchers corrected themselves, later stating the deputy might not have been ejected. Earlier scanner traffic had responding sheriff’s deputies searching the tall grass for their fellow law enforcement officer.

Imperial County Sheriff’s Office will be releasing a public statement on Monday morning, June 28, according to a sheriff’s officials contacted Sunday.

At least two helicopters had already landed at the scene by 8:30 p.m., and a total of three had been called out. The third airship hovered overhead briefly but did not land and flew away from the scene. All available ambulance units were also called to the area in the initial response.

Alpine Man Dies After Being Thrown from Motorbike

No information has yet been made available on the survivors of the accident or how many people were actually involved.

A coroner’s transport vehicle arrived at the crash site around 8:50 p.m. A law enforcement escort of at least a dozen vehicles ranging from sheriff’s, police, fire, and California Highway Patrol cruisers left the scene of the accident following the coroner’s transport at 9:20 p.m.

Numerous Imperial County residents have expressed condolences on several Facebook pages, and on this newspaper’s page, including from Calexico Police Chief Gonzalo Gerardo, who wrote:

“R.I.P. Deputy. You were my neighbor, I will never forget our talks and your love for the career. God Bless, we will take it from here. The Calexico Police Department Staff sends our most heart felt condolences to your immediate family and the ICSO Family. Chief Gonzalo “Chalo” Gerardo.”

The story is still developing.

Next
I.V. Food Bank is Sen. Hueso’s Nonprofit of the Year