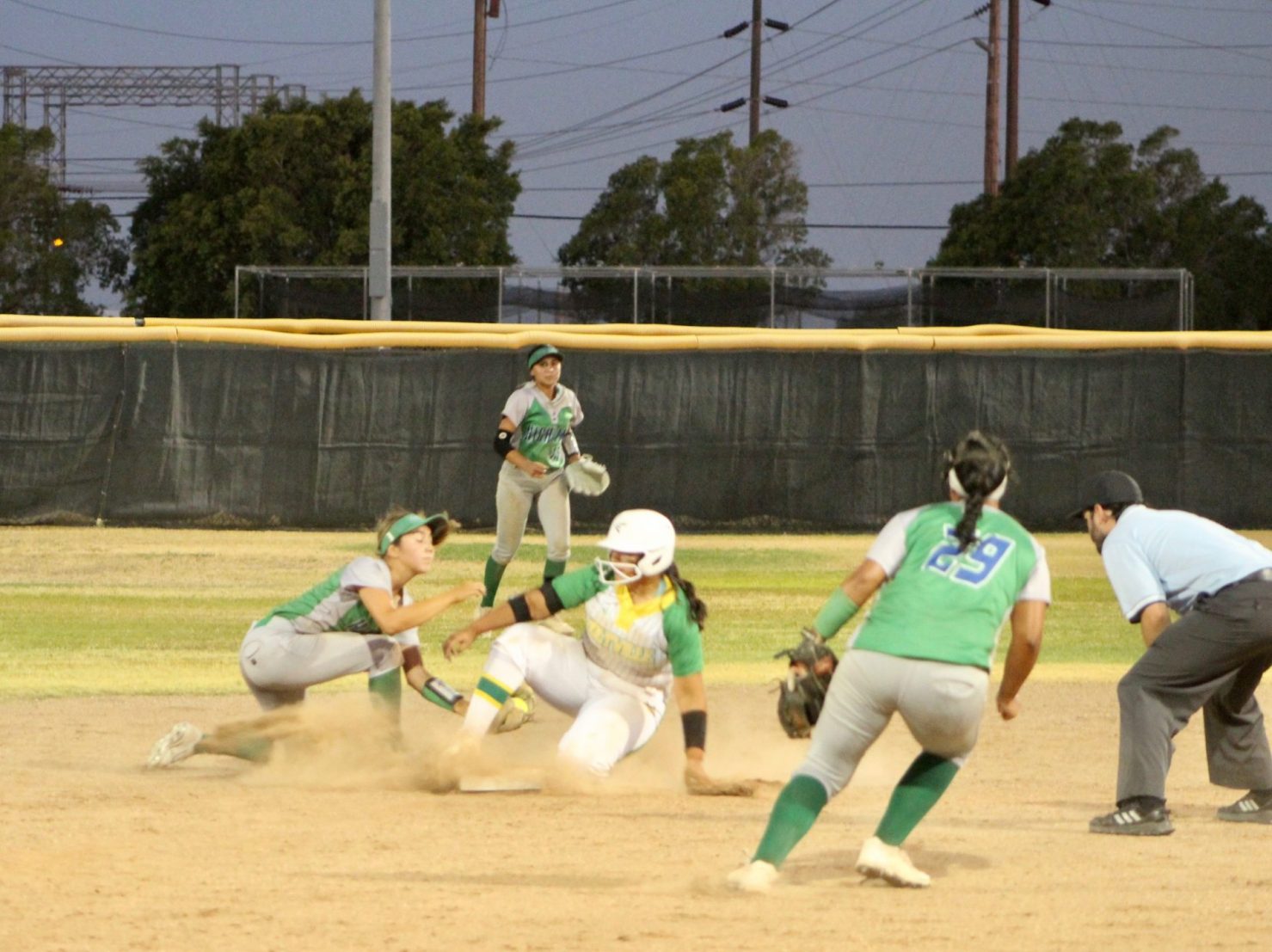 Holtville High senior Emily Zarate slides safely into second base after blasting a double in the seventh inning of the Vikings’ 4-3 loss to Highland High of Bakersfield in the Southern California Regional Division IV championship game in Holtville on Saturday, June 26. | CATHI PHILLIPS LARIOS PHOTO
Home
Sports
In Sports

SoCal Regional Championship Loss Comes Down to Final Out.

The packed house at the Vikings’ softball field added another level of electricity in the air as the two teams battled back and forth for the right to be called SoCal champions.

“This was definitely a great game for all the people that came out and supported both teams,” said Keriann Johnston, Holtville’s assistant coach. “It was the type of game where you lose the game and walk off the field knowing you left everything on that field and walk off with your head held high.”

Johnston filled in for head coach Melissa Snyder, who was out of town for her sister’s wedding.

In the dramatic final inning, Holtville senior Emily Zarate pounded a one-out double to the right-center field gap to put the tying run in scoring position. Next up was freshman catcher Kaitlyn Havens who hit a blooper that was caught by the Highland shortstop.

With two outs, Vikings’ freshman Brooke Strahm came to the plate and battled the Scots pitcher to a 2-2 count before lofting the ball to short left field, but instead of falling for a hit and possibly tying run, the Scots’ left fielder made a running catch to end the game and secure the title for Highland.

“I was going on contact, and when I was getting ready to round third, I looked and saw she caught the ball,” Zarate said about the possible tying hit. “Even though we lost tonight, we played really well. It was very exciting.”

Highland (21-4 overall this season) scored once in the top of the first inning, only to have the Vikings answer with a run of their own in the bottom half of the inning.

Tied 1-1, Holtville (21-5 overall this season) plated two runs in the bottom of the third inning thanks to an RBI triple from sophomore Demi Johnston and an RBI ground out from Zarate, that put the Vikings ahead 3-1.

Highland scored one run in the fourth and two in the top of the fifth to get the Scots their 4-3 advantage and set up the exiting final two innings.

On the mound, sophomore Kalli Strahm pitched a complete game for the Vikings, allowing four runs on 10 hits with five strikeouts and one walk. She worked out of a bases-loaded jam in the top of the seventh inning to keep the score 4-3 heading to Vikings’ final at-bat.

Holtville had seven hits, including doubles from Kalli Strahm, Zarate and Havens and a triple from Johnston.

“Nobody hung their head at the end of this game,” Keriann Johnston said. “Both teams just battled each other all night. It was a pitchers’ duel, it was a defensive battle, it was all you could ask for in a championship softball game.”

For the senior Zarate, winning the school’s first CIF-San Diego Section softball championship in 23 years will always hold a special place for her.

“We didn’t know we were going to have a season, then we get the OK and we have this amazing year. It was so exciting and so much fun, I think we all lost our voices from yelling so much after last week’s championship,” said Zarate, who said she will likely attend Imperial Valley College next year and play softball.

Next
Sheriff’s Deputy Dies in Collision West of Imperial; Department IDs Him