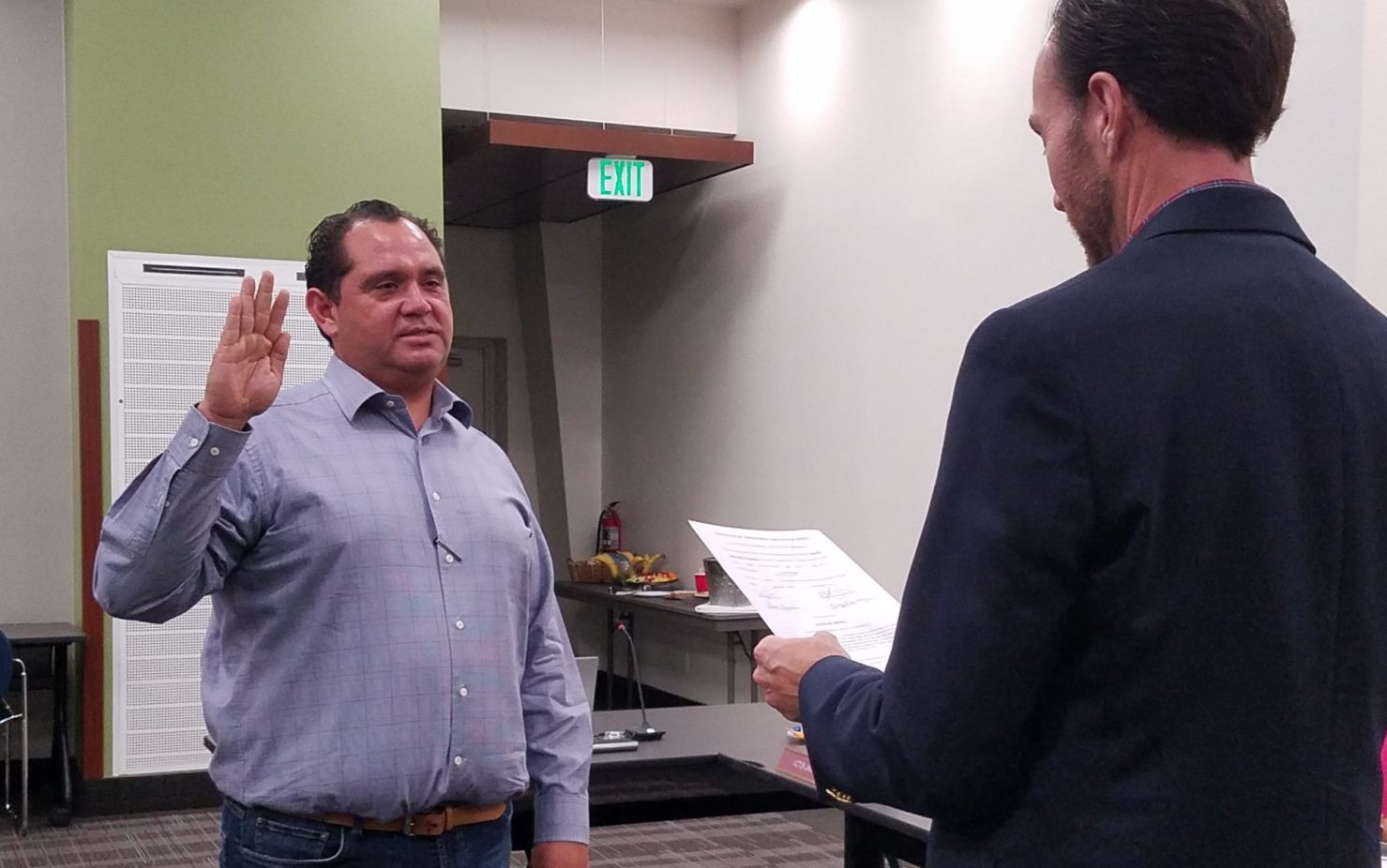 Calexico resident Cesar Rodriguez is sworn in as a county Board of Education trustee by county schools Superintendent Todd Finnell after being selected by the board on Monday, June 28, to fill the vacancy left by former trustee Annette Gonzalez-Buttner's recent incarceration. JULIO MORALES PHOTO
Home
Education
In EducationRegional News

EL CENTRO – When Calexico resident Cesar Rodriguez took the oath of office to serve on the county Board of Education on Monday, June 28, the momentous occasion came about four years later than he originally desired.

In 2017, Rodriguez was one of two candidates who had vied for the Area 1 trustee seat, but ultimately finished some 213 votes behind incumbent Annette Gonzalez-Buttner, who amassed 914 total votes.

On Monday, with Gonzalez-Buttner in jail following four felony convictions partly related to her 2017 campaign, Rodriguez found himself contending for her vacant seat, but this time against three other individuals.

During the meeting, when all four applicants were asked by the Board of Education about what it meant for them to potentially be able to serve on the board, Rodriguez offered up a brief response.

“It would mean finishing what I started,” Rodriguez said, referring to his 2017 candidacy.

Of the four individuals who applied for the appointment, Rodriguez was alone in having spent his entire career in the private sector. But far from a liability, the El Centro-based Arctic Air Conditioning president said he expects his business experience and acumen to be an asset for the board.

A graduate of Aurora High School, Rodriguez told the board during the meeting’s interview process that even though he may not have attended college, he considers himself a local success story for having started his own business and provided for his family.

His tenure on the board will be an attempt to enhance and extend those same opportunities for local students who may not be college material but nonetheless have the talent and drive to succeed.

“You can be successful if you don’t go to college,” Rodriguez said. “I want kids to see that.”

Nor are public service and community involvement foreign concepts for Rodriguez. He currently sits on the county Workforce Development Board and was a past member of the Calexico Planning Commission and vice president of the city’s Chamber of Commerce.

Rodriguez will serve as Area 1 trustee for the remainder of its term, which expires at the end of 2022, the Imperial County Office of Education previously reported. He also indicated after the meeting that he intended to run for the Area 1 seat in the November 2022 election.

Rodriguez took his place alongside his four fellow trustees after having been administered the oath of office during the first part of the June 28 board meeting.

Following the meeting’s open session interview of the candidates, board President Victor Jaime thanked the four for their willingness to serve on the board and serve the wider community.

He further acknowledged that the four applicants’ varied professional and personal experiences made it difficult to solely select one for the vacant seat.

“I wish I could have more than one appointment,” Jaime told the group. “I think you have the heart and soul for it.”

When it came time for the board to make its selection, Trustee Lucy Hendry motioned to have Rodriguez appointed. Trustee Alicia Armenta then seconded the motion, which the four-member board then voted unanimously to approve.

Rodriguez’s appointment allows the county Board of Education to forego a relatively costly special election which otherwise could have filled the vacant seat.

The Imperial Community College District board, whose Area 1 seat Gonzalez-Buttner was elected in 2020 to represent, took a similar tact during its June 16 meeting. By a vote of 4-2, it approved the option to make an appointment to fill the board vacancy in place of a special election. Trustees Steve Taylor and Isabel Solis had voted in favor of a special election.

The Imperial Community College District (ICCD) board is schedule to host a special meeting on July 20, where its remaining six trustees will interview candidates and make its selection during open session.

The appointed person will serve on the board until the board’s next regularly scheduled election, Nov. 8, 2022.

“The Trustee Area 1 seat will then be open to qualified candidates at that election and any person elected would hold the office for the remaining two years of the term,” said William Priest, Imperial Valley College legal counsel, in a June 23 press release.

But unlike the county Board of Education vacancy, the ICCD board vacancy had attracted the attention of a few community members from Calexico and Heber who urged the board to host a special election instead of making a provisional appointment.

Following the ICCD board’s decision to make an appointment to fill the vacancy, the Imperial Valley Equity & Justice Coalition issued a statement that lamented the board’s decision.

“We are disappointed that ultimately six trustees from outside Calexico/Heber will select our next higher ed. Advocate,” the statement read.

Applications packets for the ICCD Area 1 seat are available at the IVC President’s Office. They are also available at the following locations in Calexico: Calexico Unified School District office; Calexico City Hall, City Manager’s Office and the Calexico Post Office.

The packets can be obtained in Heber at the Heber Elementary School District office and the Heber Public Utility District lobby. The packet will also be available at the Imperial Valley College website at https://www.imperial.edu/area1vacancy