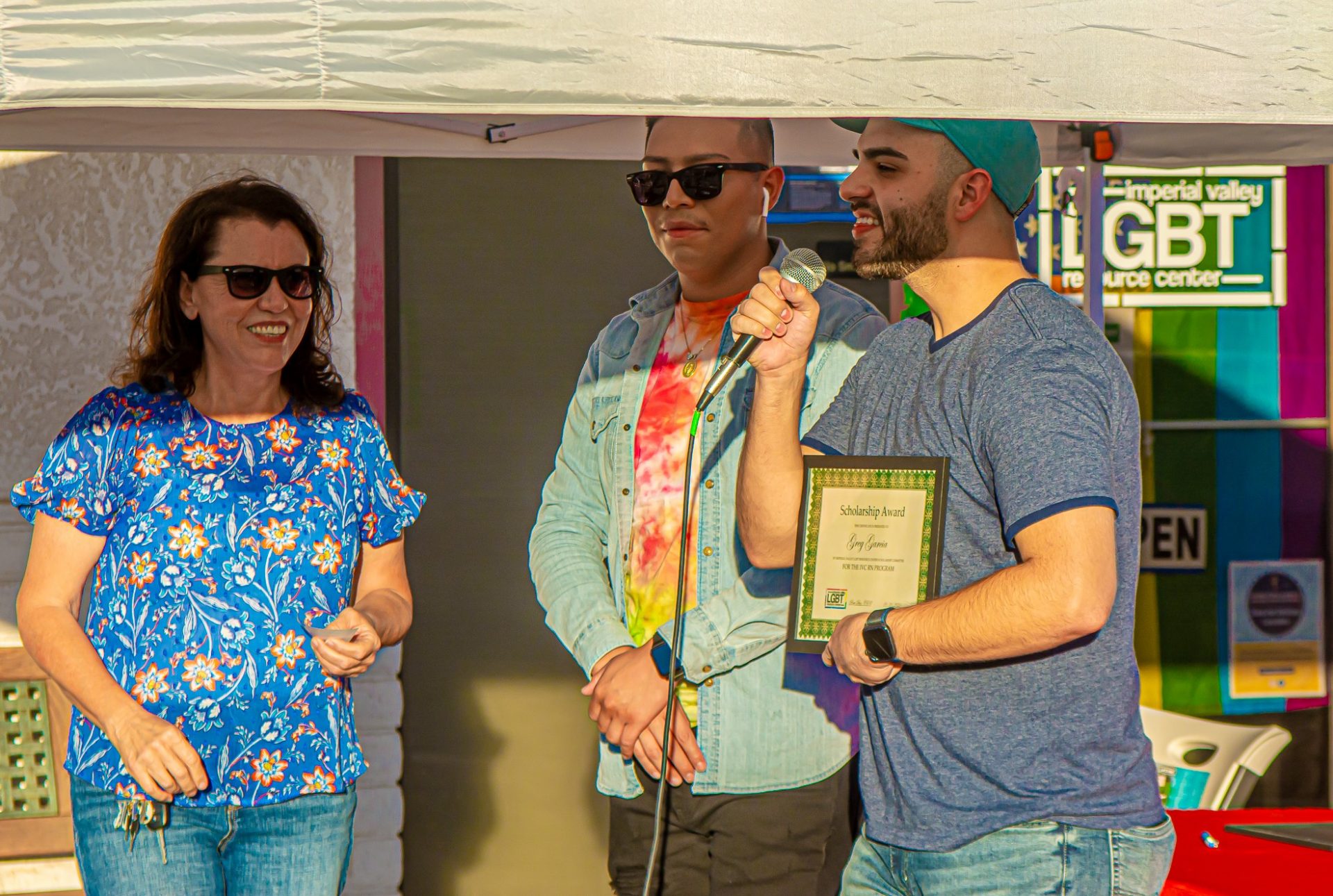 Rosa Diaz (from left), chief executive officer of the IV LGBT Resource Center, and Austin Christiansen look on as Greg Garcia accepts one of the first two $1,000 scholarships awarded in memory of the murdered Marilyn Monroe Cazares during a Pride event and vigil on Saturday, June 26, in El Centro. | CAMILO GARCIA JR. PHOTO
In Regional News

EL CENTRO — As the sun set on national Pride month, the Imperial Valley LGBT Resource Center held its own celebration, yet a tie-in to three significant acts of violence against the LGBT+ community gave the otherwise festive event an aura of sadness and a somber tone.

Promoted for several weeks as a vigil in memory of slain trans community member Marilyn Monroe Cazares of Brawley, the remembrance on Saturday evening, June 26, also grew to include the killing of trans man Poe Delwyn Black, whose body was found in the Coachella Canal near Slab City on May 11.

The one-year anniversary of Cazares’ murder, which has not been solved, will be on July 13.

“It’s kind of a bittersweet day for us,” said Daniel H. Sohn, chief executive officer of the El Centro Chamber of Commerce. “We’re having to recognize the loss of community members within our own community but also to uplift the community as well.”

Sohn serves on the advisory board for the IV LGBT Resource Center, and this event had a personal connection for him. In addition to honoring Cazares and Black, the vigil was also intended to pay homage to the 49 people killed five years ago this month in the Pulse nightclub shooting in Orlando, Fla., in which Sohn was friends with several of the victims.

He and his husband are recent transplants from Florida and wore rainbow ribbons to honoring the Pulse victims gunned down inside the club on June 12, 2016, with Sohn’s ribbon adorned with the No. 49 written in crystals.

Pride Celebration Had Many Layers

Saturday’s event outside the resource center office on Ross Avenue in El Centro was meant to play out on several levels, and some were joyous.

“Pride is a big event that is celebrated by (the) LGBT+ population,” said Rosa Diaz, the founder and chief executive officer of the IV LGBT Resource Center. “So, we decided that although in Imperial Valley, we celebrate our pride in October, which is a week of events, we are doing something small in June to recognize Pride, and also as a way to recognize those who have been taken violently because of who they are.”

The resource center offered up snow cones and pizza for those who did make it out to the sparely attended event, and there were several health-focused booths meant to raise awareness and provide services. COVID vaccinations were being offered, HIV testing was done, and Planned Parenthood had a booth onsite to educate about reproductive rights.

“We heard from some really inspiring people, and we got to watch and honor some of our fallen LGBT siblings. I think it’s really important to keep holding Pride events and LGBT-awareness events, especially in our small community, where they are so conservative,” said Jazmyn Horton, a San Diego State University student and president of the university’s new Planned Parent Generation Action club, which is aligned with Planned Parenthood. “They don’t talk a lot about LGBT issues, so I think things like this are important because it does happen here. So, events like this are fun, but also bring awareness and education to issues facing our community.”

One of the focal points of the evening was the awarding of (the first-ever) scholarships in Marilyn Monroe Cazares’ memory. Scholarships of $1,000 each went to Greg Garcia and Melanie Baeza, Diaz said.

The evening ended with the vigil, and while Diaz acknowledged that those who were in attendance honored the memories of Cazares, Black and the Pulse victims, absences and silences were noted.

Diaz would not comment to that effect when asked on Sunday, June 27, what happened to the presence of the regional transgender community, or even local friends and family members, that marked an outpouring of activism in the immediate aftermath of Cazares’ July 13, 2020, murder.

Additionally, the lone person on hand for Poe Black, a transgender man originally from Nashville, Tenn., who was found stabbed multiple times near Slab City in early May, declined to be interviewed by the media and refused to speak during the vigil.

Lori Brammer, also of Nashville and Black’s cousin, who spoke to this newspaper at length some weeks earlier about coming to Imperial County to advocate on her cousin’s behalf and who said she would go to Slab City to look for answers herself, did none of those things while in the Valley. She left a day or so later.

“I think it’s critical for us as a community to be mindful of what impacts all of our community. And if we are going to call ourselves a community, then we need to stand up for the right thing, and that’s to acknowledge that two members of our community, our regional community, were brutally murdered,” Olivas said. “And it seems as though they were murdered specifically because of their identity, and that is horrible. We need to acknowledge that that happened and ask for justice. We also need to self-reflect within ourselves to make sure that we are holding each other accountable and raising our children to do better. We also need to take the time to help heal those who are personally affected by these tragedies.”

As both Cazares and Black’s murders are unsolved, it cannot be definitively stated that they were the victims of hate crimes. That is not the case for the Pulse night club shooting.

In Cazares’ case, as of Friday, June 25, there have still no arrests in her case and the FBI is still assisting with looking at evidence, Brawley police Cmdr. Brett Houser said.

Cazares was found burned to death in a vacant lot in an area near the old Department of Motor Vehicles location on the east side of the city.

For Black, the Imperial County Sheriff’s Office has released almost no details in the case, only that his remains were found by two Coachella Valley Water District employees near Siphon 9 in the Coachella Canal, more than a mile north of Slab City on the morning of May 11.

Deputies are still looking for information in that killing and no suspects have been arrested, according to Chief Deputy Sheriff Robert Benavidez.

“I am so glad they decided to host this event,” said Lupe Rodriguez, a member of local LGBT community, on Saturday night. “I saw the event online and decided to stop by. Normally I have to drive to San Diego to celebrate Pride. I am really sad to hear about Poe and Marilyn, though. I didn’t know them, but it’s always sad when we lose a member of the community.”

“The LGBT community is still very fragile. We don’t have a lot of visibility. We’re still trying to figure out the numbers, because for a lot of people who are questioning, the Valley is conservative in many ways, so the messaging being that we have a lot of services is really important.”