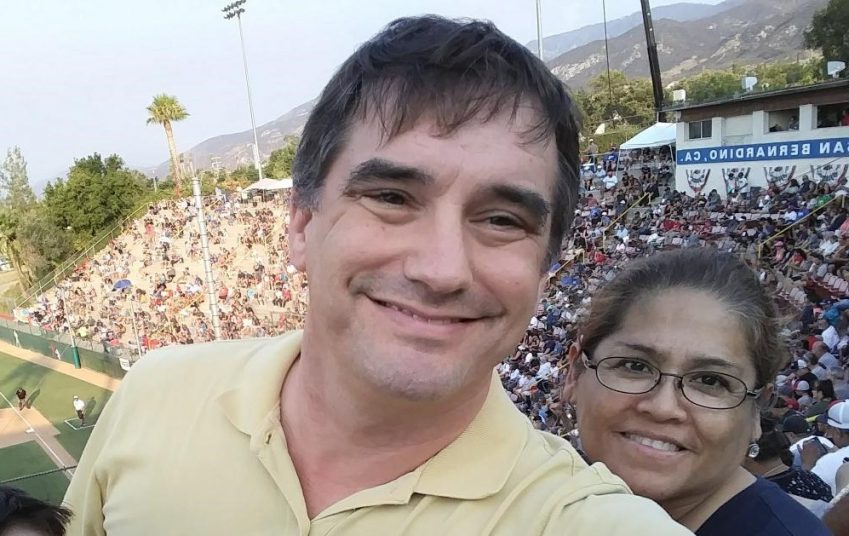 Chris Stampolis and Annette Gonzalez-Buttner, who have had a romantic relationship dating back several years, are shown in an undated photo. Recently, Stampolis was ordered to turn over any property of the Imperial County Democratic Central Committee and cease identifying any connection to the group. Although he has never been an Imperial County resident, he was often former committee president Gonzalez-Buttner’s parliamentarian. | PHOTO COURTESY OF CHRIS STAMPOLIS
Share

Though Annette Gonzalez-Buttner is behind bars, the remnants of her political reign are still being felt as winners, losers and skeptics have emerged following the latest change in leadership within the ranks of the Imperial County Democratic Central Committee.

The losing side includes former chair Gonzalez-Buttner, the ex-county Board of Education and local community college board trustee convicted of election-related fraud and whose recent incarceration helped pave the way for her and two of her supporters’ ouster from the committee.

One victor is Tomas Oliva, heir apparent to the committee’s chair and current El Centro mayor pro tem, who had lost the chairmanship to Gonzalez-Buttner several years ago and who afterward had remained a detractor of her leadership.

The question of who would lead the local Democratic Central Committee (ICDCC) recently came to a head on June 14, when Gonzalez-Buttner’s attempt to preside over a meeting from lockup was outflanked by a separate meeting where Oliva and other committee members approved her censure and removal, as well as the ouster of her son and his ex-girlfriend.

The changes were meant to restore the local Democratic community’s trust in the committee, which, Oliva said, had suffered during the years-long tenure of Gonzalez-Buttner.

“It’s about welcoming people back and courting new members. It’s not supposed to be ‘Game of Thrones,’” Oliva said, in reference to the popular HBO series whose lively central characters found themselves embroiled in never-ending political machinations.

Even so, longtime committee member Marlene Thomas said the recent change in ICDCC leadership may not amount to any significant changes, as least in terms of the committee’s level of engagement with the wider community, which has been her longstanding concern.

The fact that Thomas was not notified of the June 14 meeting where members voted to remove Gonzalez-Buttner as a member and as its chair suggests the committee as it now stands is not being as inclusive as it should be and will likely revert to courting the same “special interests” as before.

“That’s what tells me we are going back to the same ol’ thing,” Thomas said on Thursday, June 24. “Which is what we had before Annette (Gonzalez-Buttner).”

And though she acknowledged that Gonzalez-Buttner, as well as her domestic partner and go-to meeting parliamentarian Christopher Stampolis, had brought a greater level of rancor to the committee, the organization was not functioning as efficiently or purposefully as it should have.

Had the Valley’s three elected state and federal representatives attended as ex officio members as is their right, or selected alternatives to attend in their place, the situation would not had gotten as contentious as it did under Gonzalez-Buttner’s tenure, said Thomas, chair of the Imperial Valley Martin Luther King Jr. Commemorative Committee and the Imperial Valley Social Justice Committee.

“I think it’s unfair to say she was the sole problem of the Central Committee,” Thomas said. “It is my belief that had (Assemblyman Eduardo Garcia, Sen. Ben Hueso and U.S. Rep. Juan Vargas) been participating for the past six to eight years, the outcomes would’ve been different.”

The recent change in leadership appears to have brought an end to Christian Buttner’s time on the committee. The 23-year-old son of the former chair said he had joined about a year ago at his mother’s urging. As had Elaine Gastelum, his ex-girlfriend.

The news of his ouster came as a surprise, as did the news of the separate June 14 meeting that was held in his and his mother’s absence.

“I should’ve been notified and I wasn’t,” Buttner said on Friday, June 25. “You can’t make a secret committee and not tell anybody about it.”

Both Buttner and Gastelum had been removed as committee members on June 14 after the members present during a separate meeting approved resolutions to that effect, Oliva said on June 18.

During Gonzalez-Buttner’s recent trial for perjury and other felony charges, Gastelum had stated under oath that she resided outside of the county, Oliva said. The committee’s bylaws state that a member must live within the district they were nominated to represent.

Omitted from the committee’s bylaws is any explicit reference requiring that members facing possible expulsion be notified of their proposed removal.

Buttner disputed the claim that he had too many unexcused absences and contended that in those instances when he was unable to attend committee meetings because of a conflicting work schedule, he had sent an alternate in his place.

However, he chose not to disclose where he currently lived or worked. His LinkedIn profile states he is a department supervisor at BevMo in Moreno Valley, and studying biology at the University of California, Riverside.

California Democratic Party Region 19 director Ellen Kurpiewski said she was aware of the local situation and was in support of the committee members’ recent removal because they were in violation of the committee’s bylaws.

“There’s no requirement to notify them because they don’t even live in Imperial County,” Kurpiewski said.

During the June 14 ICDCC meeting that Oliva attended, the members present also approved a resolution authorizing the committee to send a cease-and-desist letter to Stampolis, Gonzalez-Buttner’s partner and oft-appointed meeting parliamentarian.

The letter demands that Stampolis refrain from representing himself as a committee member. The current committee is further demanding that Stampolis relinquish his control over certain proprietary material belonging to ICDCC, such as an email account that controls the committee’s website, and other possible items, Oliva said.

Whether Stampolis agrees to hand over the disputed items is anyone’s guess. His potential failure to do so could have consequences.

“I would very much hate to have to deal with a legal battle,” Oliva said, hinting at one potential recourse.

While he acknowledged having access to an email account, Stampolis said on Wednesday, June 22, that he had yet to have any communication with ICDCC members and was not aware of what exactly they were demanding that he return to their possession.

And even though committee leaders had every right to choose their leadership, they aren’t allowed to remove a committee member without due process, Stampolis maintained.

“It shows the level of political corruption that courses through some people who propose to be leaders in the Valley,” he said.

If any committee member deserved to be ousted for being constantly absent, it should’ve been Oliva, who almost never attended, Stampolis said.

Oliva conceded as much, stating that “I really didn’t want to be included in anything they wanted to do because I didn’t agree with (Gonzalez-Buttner).”

But since he never resigned, Oliva continued to receive meeting agendas, which he said had allowed him to keep track of what was taking place within the committee.

Nor is Stampolis without his own detractors, both here and elsewhere. Indeed, a website dedicated to Stampolis’ past misadventures in Santa Clara County can be found online at www.christopherstampolis.com

Those headline-grabbing incidents include being found guilty in October 2014 of harassing his son’s middle school principal and being subjected to a one-year restraining order as a result.

More recently, Stampolis was arrested in January 2020 by Santa Clara police for allegedly striking a woman in the knee with his vehicle after a verbal altercation in January 2019.

The accusation against Rouhotas and Porter came in the form of an ICDCC resolution passed by the committee’s executive board on Aug. 27. Though Smith had cast a vote in support of the resolution, he later expressed regret for having done so.

The committee’s resolution was ultimately rescinded on Sept. 14, but not before both Smith, Thomas and the county Board of Supervisors came to the defense of both Rouhotas and Porter. Their acts of support also placed the origins of the allegations of racism squarely at Gonzalez-Buttner and Stampolis’ feet.

“The action of the committee chair and parliamentarian was shameful,” Thomas wrote in a Sept. 1 letter she penned asking for Gonzalez-Buttner’s resignation from the ICDCC.

Smith, co-founder and coordinator of Imperial Valley Black Lives Matter, parted ways with the ICDCC soon after the episode.

The county Board of Supervisors expressed similar unease when it authorized the county to send a letter to the California Democratic Party Rules Committee asking that it take the appropriate steps to “mitigate the impacts these false and injurious accusations” have had on the county.

“The Board is especially concerned that the ICDCC is currently being influenced and directed by outside parties that do not appear to have the best interest of the ICDCC or the citizens of the County at heart,” the board’s Sept. 15 letter stated.

As for Oliva, he now intends to possibly serve as acting ICDCC chair on a temporary basis, pending the outcome of the committee’s nomination and voting process during its July 12 meeting. Eventually, he plans to take a step back should he be selected by the City Council to serve as the El Centro’s mayor in January.

Until then, his focus is on restoring order to an organization that had seen many of its prominent members leave amid the tumult of the past several years. And enhancing the committee’s profile in the community.

“What we do is really about making sure other people’s lives are better and that we’re thinking about them,” Oliva said.