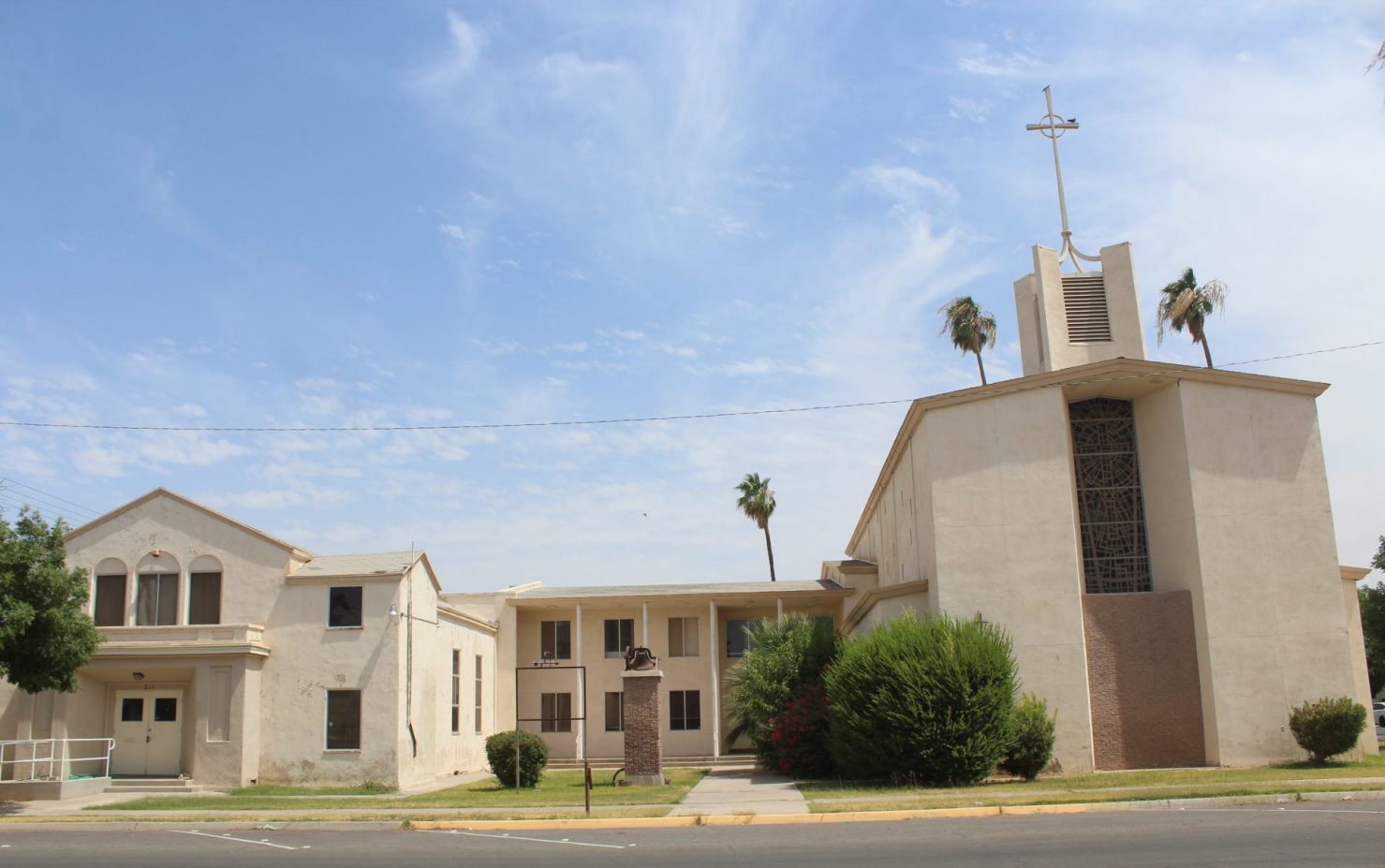 The closed United Methodist Church, located at 217 W. Seventh St., in Holtville will be reopened by the South District Union of the California-Pacific Annual Conference of the United Methodist Church as a welcome center for asylum seekers to the consternation of city officials and former local church members. The opening date is not yet known. | CATHI PHILLIPS LARIOS PHOTO
Home
Featured Stories
Share

HOLTVILLE — As part of its ministry, the Calexico United Methodist Church has been assisting asylum seekers that have been released into Imperial County by federal immigration officials over the past few years.

The effort initially started with the arrival of the caravans of Central American immigrants that crowded the United States-Mexico border in late 2017, Pastor Baldwin Avendano said.

When occasioned, the church would provide overnight hotel lodging and a bus ticket to a few individuals released from custody and in the process of uniting with family or sponsors in the U.S.

More often, because of limited funding, the church’s assistance would be restricted to a warm meal, blankets, clothing, some personal hygiene items, and a travel kit.

And though that humanitarian assistance had slowed following the recent conversion of two Valley hotels into temporary housing for asylum seekers, Avendano said church officials are anticipating an increase in the number of locally released migrants and are making plans to better accommodate them.

A large part of that plan includes the refurbishment of the closed United Methodist Church of Holtville to provide temporary housing and wraparound services for the migrants as they make travel arrangements for their final destinations.

“This is going to be a big plus for people who have to stay in the county,” Avendano said on Tuesday, June 29. “If we want to cover 10 (asylum seekers) on a weekly basis, the shelter is going to be essential for that.”

Though the expanded humanitarian effort is viewed by the United Methodist Church denomination as an extension of its legacy of service in the Valley, it is not without its detractors.

Already, a pair of Holtville city officials have expressed some concerns that the initiative may not be as universally welcomed in the small rural community as UMC officials are expecting it to be.

And a former member of the shuttered Holtville church questioned the reasoning and intent of the UMC officials and their supporting partners from outside the county who are spearheading the effort.

“Justice for Our Neighbors”

The plan to refurbish the closed Methodist church was prompted by a confluence of events that Rev. Paige Eaves, of the UMC of La Mirada, said warranted a humanitarian response.

Those events included the recent announcement by President Joe Biden that immigrants who were forced to reside in Mexico under a Trump administration policy and who had their asylum application previously denied for failing to appear in court can now reapply.

Similarly, the announcement in March by the U.S. Federal Emergency Management Agency that it was allocating $110 million to fund nonprofits and public agencies’ efforts to assist migrants at the Southwest border was viewed by the UMC and its partners as an opportunity to expand their services.

“In our work we look for Holy spiritual openings,” Eaves said in a telephone interview Monday, June 28.

The closed Methodist church, located at 217 W. Seventh St., reverted to the possession of the South District Union of the California-Pacific Annual Conference of the United Methodist Church in March, following the settlement of a county Superior Court lawsuit that alleged the former congregation had not done enough to minister to its local Hispanic population.

Initially, the South District did not have immediate plans for the church property. But with plans for a welcome center underway, new plumbing, toilets as well as laundry facilities are to be installed.

The planned refurbishment also prompted Eaves, assistant district director for the South District, to reach out to Holtville City Manager Nick Wells to ensure the proper zoning permits were in place to allow the facility to be used as intended.

Eaves said she also asked Wells about whether the tight-knit community would more likely support or oppose the planned humanitarian initiative.

“I told her there was immigrants being housed at the (Barbara Worth) Country Club and some of the residents were a little uncomfortable with that,” Wells said on Friday, June 25.

Wells also confirmed that the church’s zoning permit legally allows the private property to be used as proposed.

“It’s something that a church is by right able to do as long as it’s for temporary and not long-term housing,” he said.

Organizers of the humanitarian effort intend to work with the community so that its planned activities do not cause any backlash. Toward that effort, they plan to host an onsite information session in the near future to advise the public of their plans and to receive feedback.

The Methodist organization shouldn’t be pushing forward with this in our community. … It may seem virtuous to the distant folks in Orange County … but my experience, here in Holtville, tells me that it will have a negative impact on our city.

“We really want Holtville and Imperial Valley to see this as an effort to help people get where they are going,” Eaves said. “We’re not trying to go rogue on this. We’re trying to be partners.”

The proposed venture will be the first such foray for the South District in Imperial County. It undertook similar efforts in the San Diego area in 2016, when it assisted thousands of Haitian immigrants who had sought refuge and asylum in the U.S.

As then, the local effort will be led by none other than the “Bishop of beds,” Rev. William Jenkins, executive director of Christ United Methodist Ministry Center of San Diego, and founder of the Safe Harbors Network, a nonprofit dedicated to finding beds for refugees and asylum seekers.

“We probably have helped 10,000 refugees, immigrants and asylum seekers in the past 20 years,” Jenkins said in a phone interview on Monday, June 28. “We try to meet all of their needs and try to not let this be a burden on the community.”

To become operational, the welcome center will require the hiring of additional personnel who can be scheduled to remain onsite at all hours, as well as the likely enlistment of volunteers. Though the migrants are expected to be prescreened for COVID-19, the Safe Harbors Network has partnered with two free clinics who can offer their medical services if needed, Jenkins said.

Organizers of the initiative have yet to secure any FEMA funding, nor are they assured it will be approved. Nonetheless, stakeholders intend to continue to move forward with the initiative whether funding is made available or not, Jenkins said. The humanitarian effort is tentatively scheduled to operate for about six months. It was not clear when it may get underway.

“At the end of the six months we’ll evaluate, and we might extend it if it has met our objectives,” he said.

Nor should community members worry that the individuals to be housed at the proposed welcome center have entered the country illegally. Nearly all are expected to be asylum seekers.

Nor are they likely to leave the premises discreetly and prematurely. Past experiences have demonstrated that the migrants have worked too hard to arrive at such a point to “mess things up” and miss their day in immigration court, Jenkins said.

The humanitarian assistance is in keeping with UMC’s mission to provide respite for migrants during their asylum application process, as part of a longstanding initiative known as “Justice for our Neighbors.” Aside from assisting the migrants, the endeavor also helps keeps communities safe by providing otherwise unhoused immigrants who have been released from custody with temporary shelter.

“As a Christian organization, that’s very important to us,” Jenkins said.

Justice for Our Neighbors?

The fact that the endeavor is being proposed by UMC officials from outside Holtville presents concerns for Mayor Mike Goodsell.

“My personal position is that the corporate offices of the Methodist organization shouldn’t be pushing forward with this in our community,” Goodsell said in a written statement on Tuesday, June 29. “It may seem virtuous to the distant folks in Orange County as they consider what to do with this newly acquired property, but my experience, here in Holtville, tells me that it will have a negative impact on our city.”

The City Council was also made aware of residents’ similar concerns about the temporary housing of immigrants at the Ramada by Wyndham Hotel at the Barbara Worth Country Club. But in that case, the council was limited in its response since the country club is within the county’s jurisdiction, Goodsell said.

In his estimation, the existing Imperial Regional Detention Facility would be a better place to house the migrants in question. The prospect of having more immigrants risk their lives coming to the U.S., and potentially die like the 13 “asylum seekers” crammed into the SUV that was struck by a tractor trailer at Norrish Road and Highway 115 on March 2, is what Goodsell said he most wants to avoid.

“I believe it is a mistake to entice people to take such desperate action to come to our country,” Goodsell stated.

The irony of the UMC’s plan to convert the closed church in order to expand humanitarian services was not lost on Don Brock, a former longtime member of the now shuttered United Methodist Church of Holtville.

Members of the closed church, who have since regrouped and established the First Church of Holtville, were using the facility for just that purpose.

After the property reverted to the possession of the South District, the displaced congregation had to scramble to find another venue where it could host its monthly food distribution events for the less-fortunate. About 300 people have been assisted on a monthly basis as part of that endeavor, which the First Church of Holtville has continued to host at an alternate site.

“I thought they were already doing the Lord’s work and continuing to do the Lord’s work in several different ways,” Brock said on Tuesday, June 29, referring to the displaced congregation. “But obviously the folks in San Diego have other ideas about how things should be run in Imperial County, which I find a little strange.”

(This article was updated on Friday, July 2, to clarify that Mayor Mike Goodsell did not object to stakeholders providing additional temporary housing for immigrants released from federal custody, but rather immigrants unnecessarily risking their lives illegally entering the U.S.)