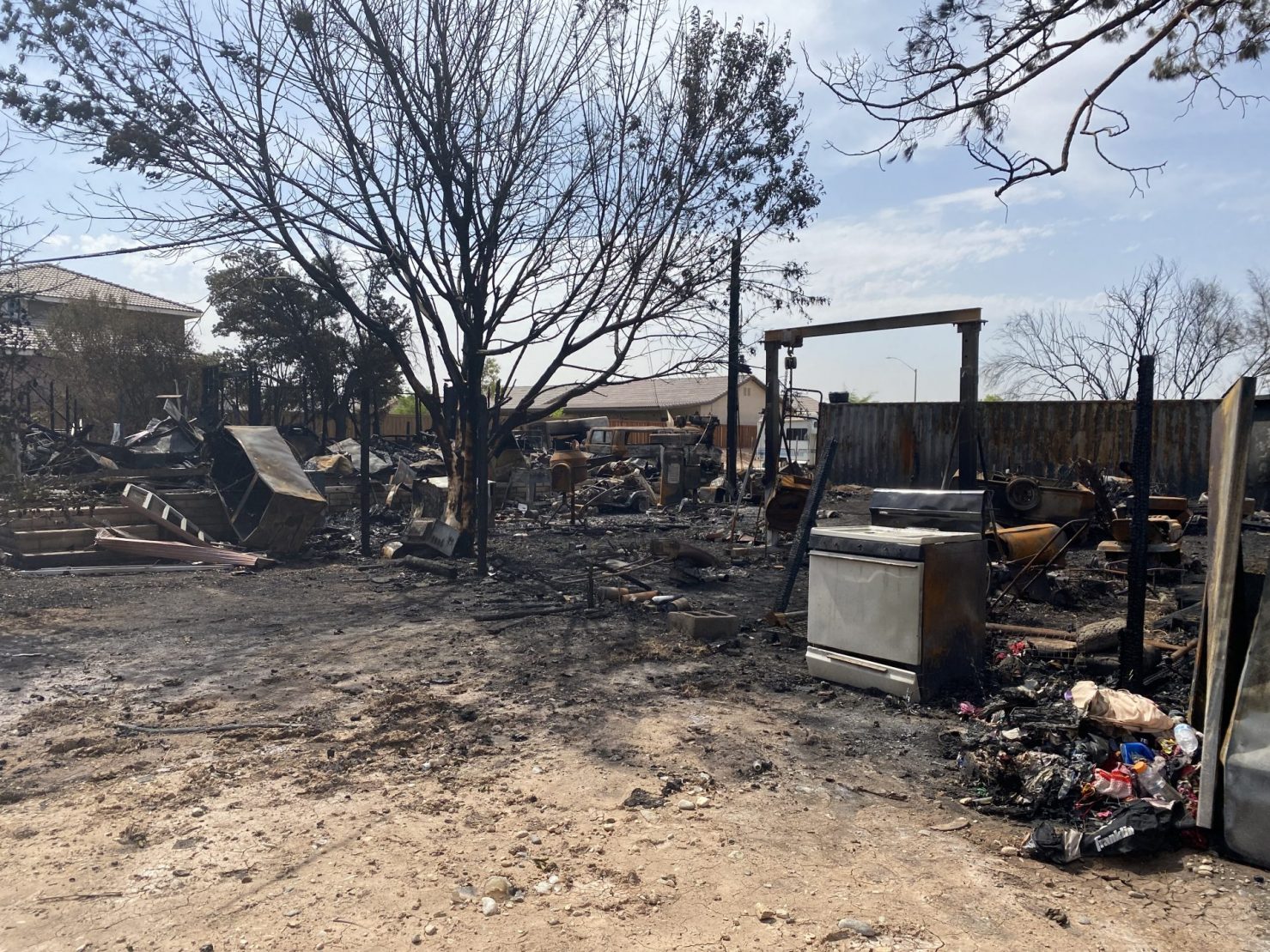 The aftermath of a fire that started in the 1800 block of East Underwood Road just outside Holtville is shown on Tuesday, June 29. | MARCIE LANDEROS PHOTO
Home
Featured Stories
In Featured StoriesLocal NewsPublic Safety

HOLTVILLE — Although any hard evidence was lost to flames, city officials suspect a brush fire that destroyed two homes just east of Holtville had signs of an illicit drug lab, they said during the City Council meeting on Monday night, June 28.

Twenty-four hours earlier, five firefighters sustained minor injuries, a dozen residents across three homes were displaced, and several outside agencies joined in the second-alarm blaze that Holtville Fire Chief Alex Silva and City Manager Nick Wells said has been similar to several fires experienced in and around Holtville over the last few years that have left behind the types of items associated with such labs.

Although the statements were made during the council’s public session, no allegations of wrongdoing have been brought against the residents of the home where the fire started on Sunday, June 27, which Silva said on Monday morning was ignited in brush near a recreational vehicle at 1895 E. Underwood Road.

Silva reported to the council that a number of disconnected stoves were found on the property, and a propane tank within the kitchen exploded, and there were also reports of a lot of activity at one of the structures. All of that led him to suspect some illegal activities, but he said any evidence was lost in the fire.

Later Monday night, Silva stated via text message that all information regarding his suspicions had been forwarded to the Imperial County Sheriff’s Office.

“Almost all of our structural fires over the last four or five years have involved propane tanks that shouldn’t have been there, or stoves not connected to working ranges,” he said Monday, echoing Silva’s assessment.

When reached Tuesday morning, June 29, Wells both clarified and seemed to walk back his statements from the previous night. To some extent, Silva did that, too.

“Neighbors reported a lot of people and items coming in and out of the properties, and there was a propane tank in a kitchen, but any definitive evidence was burned up in the fire,” Wells said Tuesday, June 29.

During an interview with a reporter on Monday morning, Silva never mentioned any propane tanks or stove, only an excess of accumulated brush at the property just outside city limits that the property owner had been nonresponsive in addressing.

Wells also brought that up Tuesday.

“The property was covered with overgrown weeds and cluttered with junk. Normally, the city would have come out and insisted that they cleaned it up, but the property is out of our jurisdiction,” he said.

A county representative could not immediately be reached for comment on weed and fire hazard abatement issues in the unincorporated county.

Silva and Holtville City Council member Mike Pacheco both live near the area of Sunday’s fire, and Pacheco reported it to Silva.

“I was inside my house watching TV, when I heard a popping sound come from outside, and my dog started going crazy. My dog always goes crazy when firecrackers go off,” Pacheco said on Tuesday morning. “I went to go see when I saw smoke coming behind my house. I looked over the fence, and saw an old man trying to put out a fire at the fence, and it spread to the brush next to it.

“I called Alex, because he lives right here, and he said he was already on his way. I am not really sure how it got started, though,” Pacheco said.

In further attempting to clarify and explain Silva’s comments at the council meeting regarding illicit activities, Wells spoke of past similar fires.

“Off of the top of my head, I can think of three or four fires in the last few years that Alex Silva, he’s the fire chief in Holtville, has reported propane tanks where they don’t belong, like at that mobile home fire,” Wells said referring to the May 14 fire on East Thiesen Road that resulted in the death of 52-year-old David James Brunton.

“So many propane tanks, and stoves that aren’t hooked up … It’s unfortunate, but it is indicative of life in the Imperial Valley,” Wells said.

The fire in which Brunton’s burned remains were found has not been resolved. In that case, a small travel trailer burned with Brunton inside and the fire started among some items outside the trailer, Silva has said before. He has said there were propane tanks among the various items at the site.

There was a period in the mid-1990s where several clandestine drug labs had been discovered in the Holtville area. At the time, authorities often cited the remote location of the community and access to chemical precursors that could be found on farms in the area, such as fertilizer.

Next
ICOE Board Appoints 2017 Candidate to Fill Vacancy