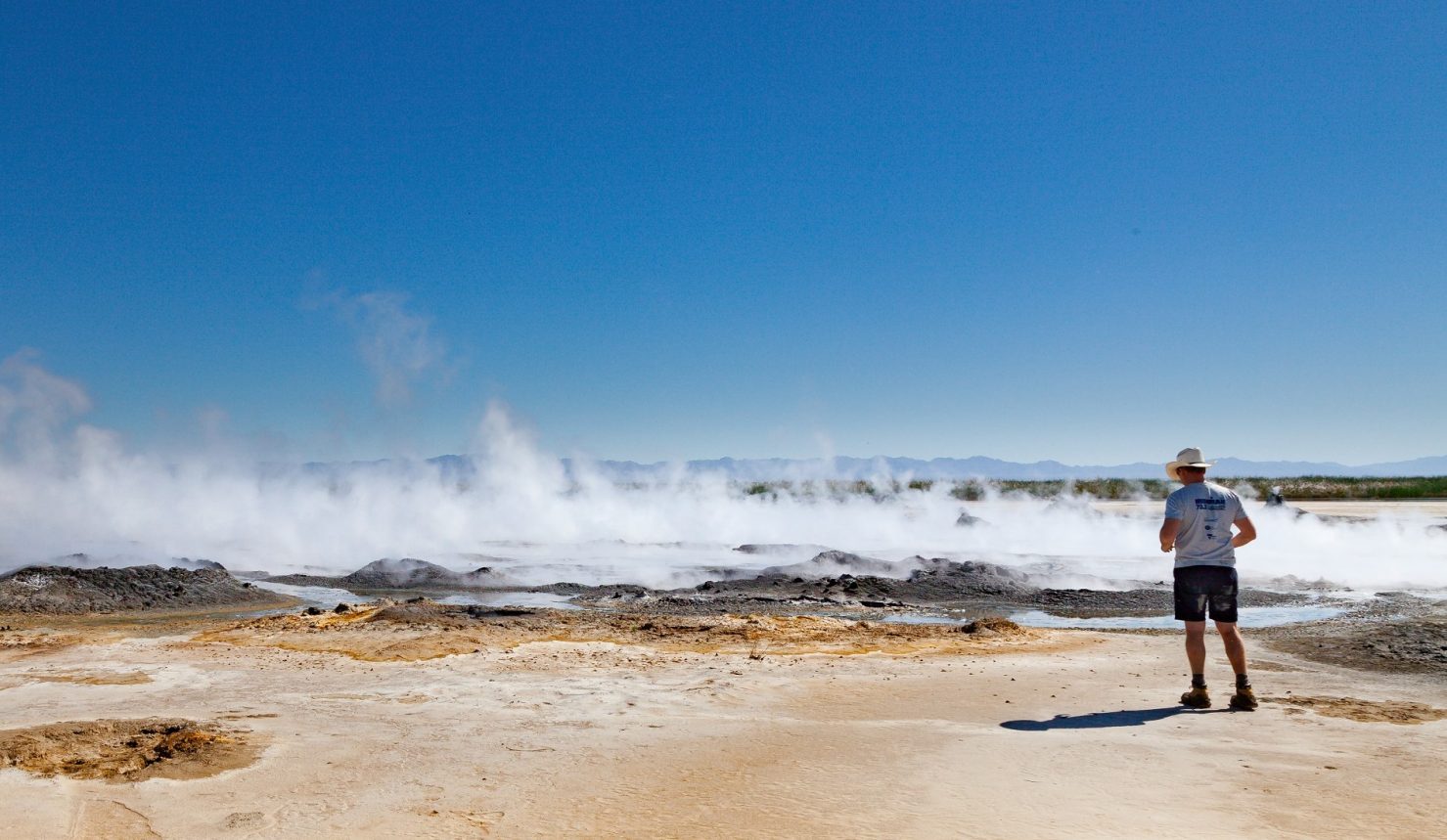 Steam and vapor rise from mud pots around the Salton Sea, an identified source of geothermal energy and source of lithium that will be part of Controlled Thermal Resources’ Hell’s Kitchen project that got a major financial boost with a partnership with U.S. automaker General Motors, it was announced on Friday, July 2. | CONTROLLED THERMAL RESOURCES PHOTO
Home
Business
In BusinessRegional News

Controlled Thermal Resources has inked an agreement with General Motors to supply the automaker with lithium from the company’s Hell’s Kitchen Lithium and Power development, located in the Salton Sea Geothermal Field, once it begins operations in 2024, according to a CTR press release on Friday, July 2.

The agreement is in the form of what is described as a “strategic investment and commercial collaboration” by CTR, and is part of GM’s total “$35 billion global commitment to EVs (electric vehicles) and autonomous vehicles,” according to a separate GM press release issued on Friday morning.

GM also announced it is the first company to make a multi-million-dollar investment in CTR’s Hell’s Kitchen development and has secured first rights to purchase lithium produced from the first stage of the Hell’s Kitchen project, including an option for a multi-year relationship.

CTR expects to commence delivery of lithium from its first stage facilities in 2024.

“We are very pleased to establish this strategic relationship with GM moving forward,” said Rod Colwell, CTR’s chief executive officer. “GM has shown great initiative and a real forward-thinking strategy by securing and localizing a lithium supply chain while also considering the most effective methods to minimize environmental impacts.”

“Lithium is critical to battery production today and will only become more important as consumer adoption of EVs increases, and we accelerate towards our all-electric future,” stated Doug Parks, GM executive vice president, Global Product Development, Purchasing and Supply Chain, in the July 2 release.

“By securing and localizing the lithium supply chain in the U.S., we’re helping ensure our ability to make powerful, affordable, high mileage EVs while also helping to mitigate environmental impact and bring more low-cost lithium to the market as a whole. GM looks forward to working with CTR, in addition to state and local leaders, in achieving these goals,” Parks added.

Batteries are and will remain one of the largest cost drivers of EVs, GM stated. Lithium is a key battery material used in the cathodes and electrolytes of GM EVs like the Chevrolet Bolt EV and Bolt EUV. Lithium will become even more important in battery use as GM explores lithium metal batteries with a protected anode.

Most lithium used in lithium-ion batteries is currently mined and processed outside of the U.S.

CTR’s lithium resource at the Salton Sea in California is one of the largest known lithium brine resources in North America, according to CTR, an Australia-based company with local offices in Imperial County. The integration of direct lithium extraction with renewable geothermal energy offers the highest sustainability credentials available today, CTR stated.

“CTR’s closed-loop, direct lithium extraction process utilizes renewable power and steam — significantly reducing the time to produce battery-grade lithium products and eliminating the need for overseas processing. CTR’s operations will have a minimal physical footprint and a near-zero carbon footprint. The brine, after lithium extraction, is returned to the geothermal reservoir deep within the earth,” according to the press release.

“Worldwide growth in electric vehicle adoption has highlighted the critical need to develop a strong and secure battery supply chain in the United States,” Colwell stated in the release. “CTR is fully committed to developing its significant lithium resource in response to this, and we look forward to collaborating with GM as we continue to accelerate these efforts.”