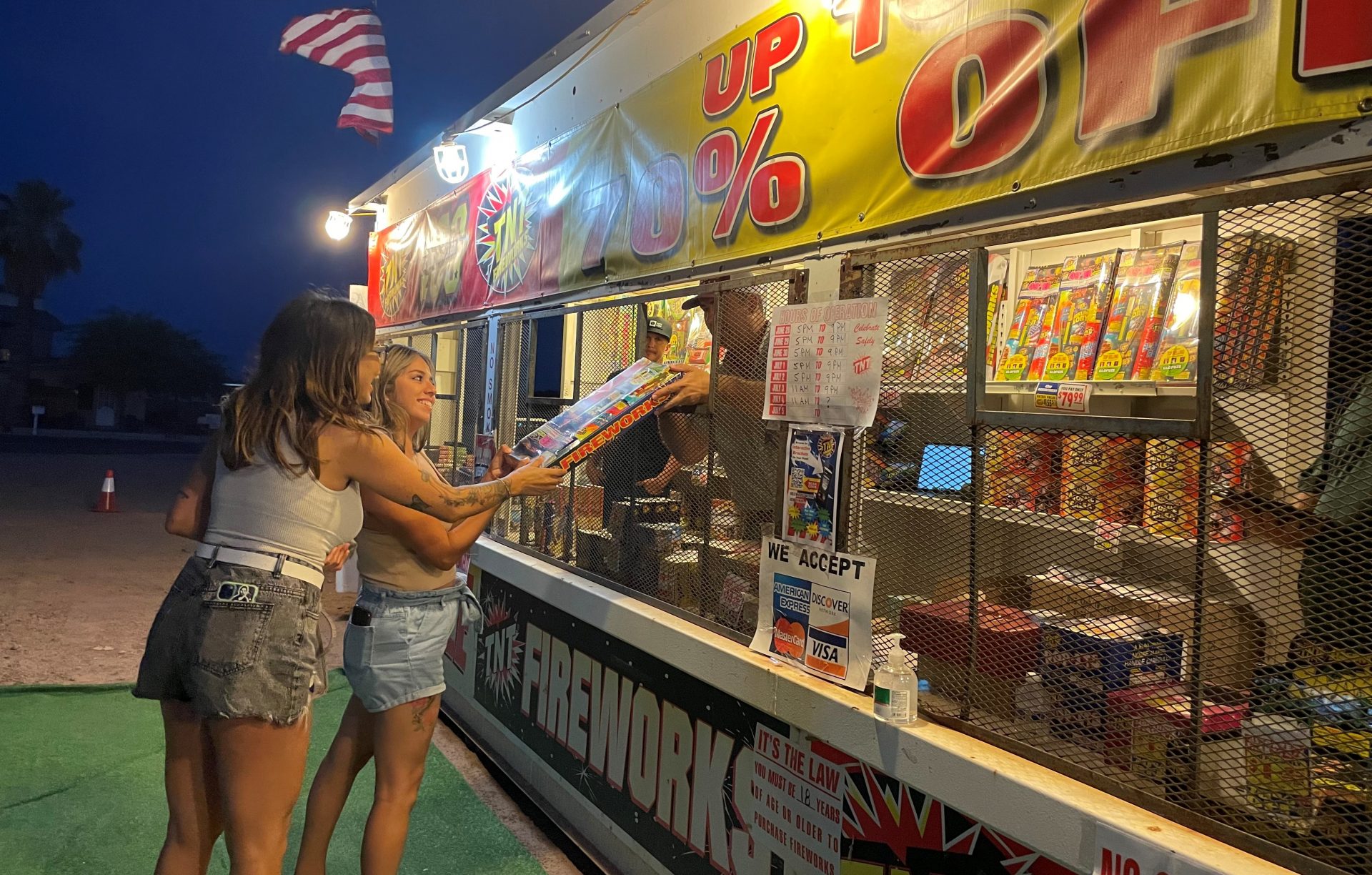 Here’s What to Know About Lighting Up the Night Ahead of Independence Day.

We hold these truths to be self-evident, that all fireworks are not created equal, that some are endowed by their Creator with the ability to burn the heck out of you.

In the pursuit of certain unalienable Rights of Life, Liberty, and the pursuit of Happiness, please obey your local laws on the use of state fire marshal-sanctioned Safe and Sane fireworks, abide by their hours of operations, and, for Humanity’s sake, please take care your pets — shelters across this great Valley of ours are already filled to capacity with homeless animals, don’t add to the problem.

“Ahead of the Independence Day celebrations on (Sunday) July 4th, the residents of the County of Imperial must understand that fireworks regulations may differ among cities and townships around the Valley. What is permitted in one might not be elsewhere,” according to Imperial County Battalion Chief Juan Rodelo .

Of course, Rodelo’s area of purview is the unincorporated area of the county — those regions outside official city limits — including populated townships like Heber and Niland, and according to Imperial County’s government code, starting fireworks there is a nonstarter.

“Possession of any type of fireworks, including ‘Safe and Sane’ fireworks is not allowed in any of these areas of Imperial County. Persons found in possession of fireworks will be in violation of such ordinance and will be subject for seizure of such items and would face fines up to $4,225 … ‘Safe and Sane’ fireworks are only allowed in the following cities: Brawley, Calexico, Calipatria, El Centro, Holtville, Imperial, and Westmorland,” according to Chapter 8.24 of the county Code of Ordinances.

Yet even in those cities there are rules. What is allowed in Calexico, might vary ever so slightly from Brawley or Holtville, based on city ordinances. So, here’s what to know, before your blow:

(Incidentally, Rodelo included the portion of the ordinance that reminds people that even within the cities where fireworks are legal, any fireworks that “explode, shoot into the air, or move along the ground are deemed dangerous and are illegal anywhere in the State of California.”)

The sole fireworks booth in Holtville is also a TNT-brand operation run by the Holtville Chamber of Commerce at the corner of Fifth Street and Holt Avenue.
It’s been opening at 5 p.m. since Monday, June 28, and closing at 9 p.m. each night.

(Psst! Don’t tell anyone, but we think it was a sales’ ploy. From the looks of the shelves on Thursday night, July 1, we think there are still some sparklers and maybe an Atomic Salsa or two.)

Checking on the Holtville Municipal Code, the fireworks passage does not list what times fireworks have to end by in the city, but it probably a good rule of thumb and quite neighborly to ramp it down at a reasonable hour.

Allegranza agreed and added to be mindful of not just your neighbors but pets, too.

Safe and Sane fireworks, or state-approved fireworks, may be sold or discharged during the time period beginning at noon June 28 and ending at 10 p.m. July 5 (Monday) of that same year, according to Calexico Fire Inspector Fernando Villa.

Within those prescribed days, Villa said municipal code states the fireworks can only be discharged between the hours of 9 a.m. and 11 p.m.

And he added it is unlawful to sell Safe and Sane fireworks in the city without a city-issued permit.

For Calexico, that’s two permits and two locations — 2540 Rockwood Ave. and 1407 Imperial Ave., and both are TNT Fireworks locations.

Hours of operation at both booths is 9 a.m. to 10 p.m. through Sunday, July 4. All major credit cards are accepted, and the permits are often awarded to nonprofits or service clubs and function as fundraisers for the organizations.

Located in the Walmart parking lot, this booth is run by Christ Community Church’s Calexico campus at 341 E. First St., which is run by Pastor Frank Zazueta.

Although Zazueta said the proceeds go to the church, much that money finds its way back into the community in the form of murals.

Rockwood, Mains, and Dool elementary schools are just a few that have benefitted, where the Christ Community has provided supplies to paint murals at the schools. Zazueta said the money goes into buying paint and material.

The pastor offered to repaint the murals himself, which he has done at certain school sites, he said.

Christ Community Church has operated the Walmart booth for about four to five years, Zazueta said.

Found behind the Subway sandwich shop and next to Food4Less, this TNT booth is operated by Iglesia Mas Que Vencedores at 711 Pierce Ave.

Saul Garcia, who was at the booth on a recent afternoon, said the 29-year-old church is also a fundraiser is his church.

He encouraged Calexico residents to come buys, as “it’s a good opportunity for people to be able to go out and buy fireworks due to the pandemic.”

As one might expect from the county seat and the most populous city, El Centro has a bevy of booths up and operating through Sunday. There are five locations throughout the city.

El Centro’s use and sales times seem to be just a tad more permissive than the other cities, too.

According to the municipal code, possession and use starts at noon on June 28 and ends at midnight on July 6, which would be Tuesday.

Public use during this period is to cease at 11 p.m., according to the code.

“Just a friendly reminder only Safe and Sane fireworks are allowed in city limits,” the El Centro Police Department Facebook states. “No person shall possess, sell, use, display or explode any dangerous fireworks, including, but not limited to, any rocket, firecracker, roman candle, squib, torpedo, wire core sparkler, black cartridge, aerial shell or other combustible device or explosive substance or any kind of fireworks, by whatever name known, within the city.”

The city of Imperial, ever the user-friendly community, provides a map of its three permitted TNT fireworks location where residents can purchase Safe and Sane supplies from 9 a.m. through 10 p.m. until Sunday.

Use in city limits is limited noon on June 28 to noon on July 6.

Location in Imperial are 431 W. Aten Road (Challenger’s Little League), 320 S. J St. (Faith Academy), and an Imperial Lion’s Club booth, but the address was not immediately available. It appears to be located the Imperial County airport.

The Brawley Police Department issued a press release this year to bring attention to the hours of usage allowed under its ordinances, which says noon on June 28 through noon on July 6 , and between 9 a.m. and 11 p.m. on those days.

“Please understand that the use of fireworks is dangerous and may cause serious bodily harm, fire hazards, noise disturbances and trauma to those dealing with mental and/or physical health conditions. To support our community, the Brawley Police Department will be dedicating additional police officers to patrol areas reporting the use of illegal fireworks,” according to the department’s release.

Although it appears numerous benefactors came to the aid of the overcrowded Imperial County Humane Society over the last few days and adopted or transported dozens of dogs and puppies to rescues outside the area, according the director’s social media posts, Independence Day is always a concern.

“The Fourth of July is the most dreaded day of the year for animals and people who work in the animal welfare field,” Devon Apodaca, executive director of the Humane Society, told the Calexico Chronicle in July 2020. “Animals don’t understand the festivities … booms, flashing (lights), noise from fireworks, especially for animals that are outdoors.

“They try to find a safe place to hide and sometimes they run away, go through fences, jump fences, and injure themselves. They are scared, and sometimes the animals just keep going and get disoriented. They can get seriously injured, run into traffic,” Apodaca said. “The next morning the cities (animal control) are picking up dead animals that were hit by cars or strays.”

Previous
Stream N’ Chill: So, You Want to Talk A24?