Law Enforcement Community, Family, and Friends Pay Tribute to Anthony Redondo Ahead of Next Weekend’s Funeral. 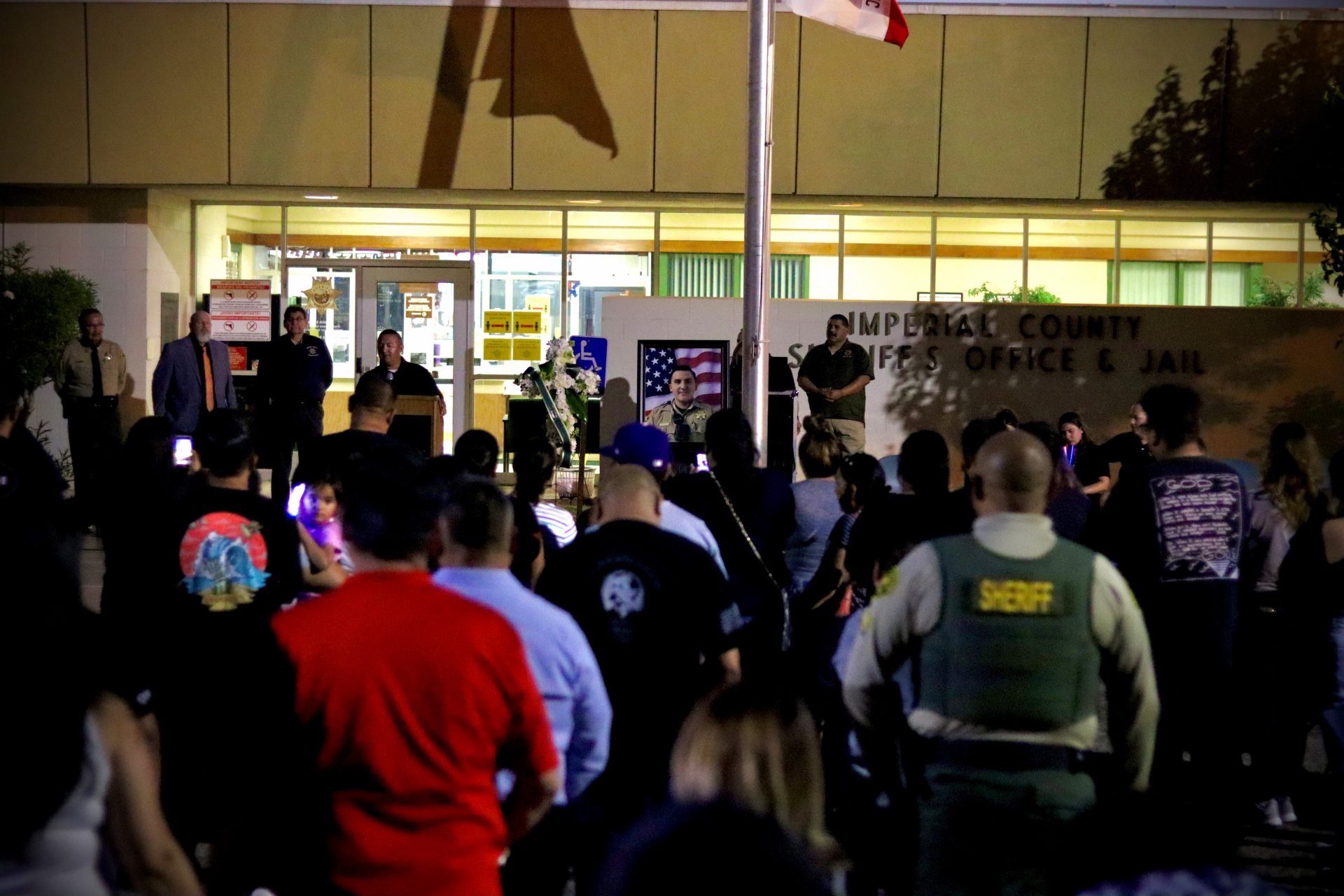 The public, fellow Imperial County sheriff’s deputies and members of the law enforcement community, friends, and family gather at Applestill Road in front of the Sheriff’s Office headquarters on Thursday evening, July 1, to pay tribute and hold vigil for Deputy Anthony Redondo, who was killed in a traffic collision on Saturday, June 26. | PHOTO COURTESY OF IMPERIAL COUNTY
Home
Local News
Share

EL CENTRO — Known as “Lil’ Pecoso,” “Lil’ Serg,” and “No. 623” (his badge number), fallen sheriff’s Deputy Anthony Redondo was remembered by many who attended a vigil in his honor as being quick to smile, exceedingly bright, and extremely supportive of his friends, family, co-workers, and community.

As the sun set over the western horizon after a brutally hot Thursday, July 1, scores of people gathered at the Imperial County Sheriff’s Department on Applestill Road to mourn and pay tribute to the 25-year-old Redondo, who died in a traffic collision on Saturday, June 26, while responding to a call for service in his patrol vehicle.

“Anthony was (my) first classmate, a brother, and then my cousin when I married into the family,” Daniel Valdez proudly shared. “We were classmates at the (law enforcement) academy, so I watched him grow, helped him grow. We helped teach each other be the best that we could be for our communities.

“He was always the brightest, always on top of everything, and always made sure he was giving his 120 percent,” Valdez, of El Centro, added. “He was a genuine and true individual that knew what he wanted to do, and he went and did it.”

The emotion within the crowd who gathered was overwhelming, and it became clear that Redondo was loved as much by his community as he loved it.

“Anthony and I always hung out with his aunt,” family friend April Myers recalled quietly. “He always had a smile on his face. His laughter was contagious. He always kept me upbeat and he always pushed me to be better.

“My son looked up to him. He was there for my kids; he was always there for his friends and family,” added Myers, of Imperial, who had known Redondo since childhood. “And he was a kind-hearted person. He was taken from us too soon.”

Jerry Godsey, pastor of Remnant Church in El Centro, a longtime friend to Redondo’s family, and a combined 20-year veteran of the Sheriff’s Office, led the remembrance at the vigil.

“It was a great honor for me,” Godsey said after the ceremony, “because with all the junk that law enforcement is being drug through right now, we’re a close-knit family, so when one of us hurts we all hurt, and it was important for me to be here to show support for the family and to show support for my co-workers because even though we work together, we hurt like a family.”

Godsey, who retired after 15 years in the Sheriff’s Office Scientific Investigations Unit and who returned as a volunteer chaplain for another five years before retiring a second time, traveled from his home in the mountains for the vigil.

Through the course of the evening, Godsey led the crowd through prayers, and several people who knew Redondo shared their memories of him.

The familial connection and legacy that extended from Redondo through the Sheriff’s Office is well known. Redondo’s stepfather is Sgt. Eric Frazier, head of patrol operations for the North County division, based out of the Brawley sheriff’s substation.

Deputies distributed dozens of glow sticks, many with the U.S. flag attached to the top, to attendees for the “candlelight” vigil portion later in the evening.

At the end of the vigil, Redondo’s mother, Janelle Frazier, thanked the crowd for coming out to honor her son.

“I always knew how amazing my son was,” she told those gathered through a steady stream of tears, “but I didn’t know how many other people knew it, too.”

Redondo was described by many as someone who was bright, driven, and could have done anything with his life, but chose to be a deputy because of his passion for helping people.

He had achieved his dream when he was sworn in as an Imperial County sheriff’s deputy on Sept. 11, 2020, and he had only been out of the “probationary” field-training phase for about four months.

Multi-term Imperial County Sheriff-Coroner Raymond Loera had only spoken to Deputy Redondo a few times before his passing, but Redondo’s effect on others was clear and made Loera take notice.

“The thing that impressed me the most was when I went out to the scene (of Saturday’s accident) and all of his coworkers and the other deputies, you could see in their faces and the way they were reacting … and that told me that in his short time here that he was making great progress in his career,” Loera said.

Although details were expected later in the day on Friday, July 2, a public viewing is scheduled for Friday evening, July 9, and a morning Mass and celebration is planned for Saturday morning, July 10, in the Jimmie Cannon Performing Arts Theater at Southwest High School in El Centro, Chief Deputy Robert Benavidez said.

A funeral procession and burial will follow at Evergreen Cemetery, and a “wake”-style public gathering is planned at the Casa De Mañana building at the Imperial Valley Fairgrounds following the burial, Benavidez said.

He added more details are to come.