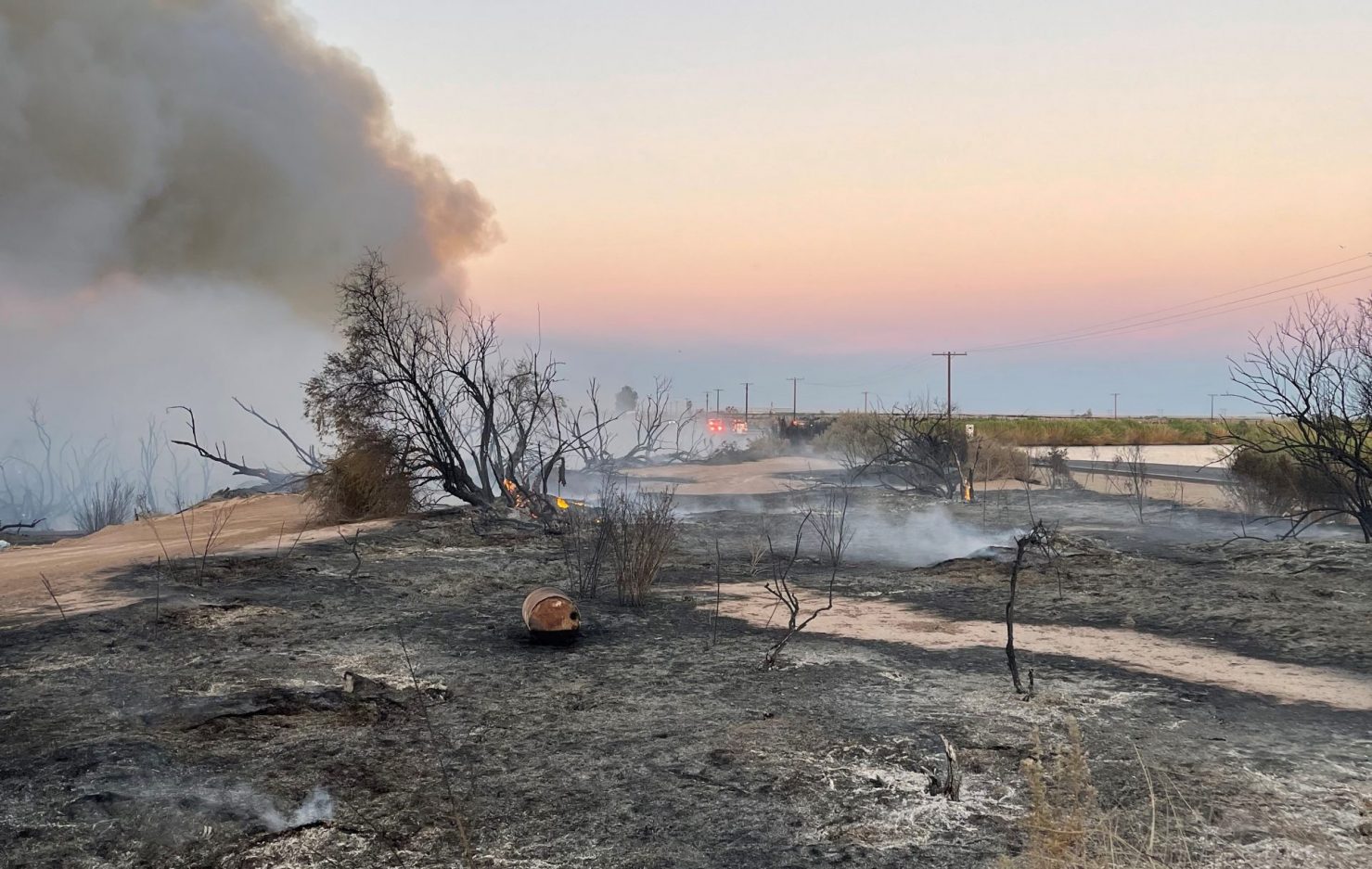 Scorched earth and a few burning embers can be seen in a 150-acre brushfire that was considered 60 to 70 percent contained as of 8 p.m. Monday, July 5, located off Rutherford Road near Wiest Lake and the Alamo River north of Brawley. | ALFREDO ESTRADA PHOTO
Home
Public Safety
In Public Safety

U.S. Fish and Wildlife Crews Stir Up Embers While Working in the Area on Tuesday, July 6.

BRAWLEY — A brush fire that torched about 150 acres some five miles north of Brawley was considered contained Monday evening, July 5, when firefighters cleared the scene and made a mad dash across the county for the Calexico area and the New River bottom fire late that same night.

While many crews were still on scene in Calexico on Tuesday, July 6, word came over the radios that the Brawley-area blaze thought to have started near Rutherford Road not far from Wiest Lake and the Alamo River had rekindled.

Around 1 p.m., a number of Imperial County and Calipatria fire crews, among others, arrived back at the scene to deal with a smaller version of the fire that on that first day had moved into and around the Alamo River bottom.

The fire was restarted, according to radio reports, when U.S. Fish and Wildlife Service workers, clearing additional brush and moving dirt with heavy machinery apparently disturbed an area that had glowing embers that flew to nearby brush.

The last of the neighboring crews, Calipatria fire, were cleared from the scene sometime around 5 to 5:30 p.m. Tuesday.

Some 35 fire personnel from Imperial County, Westmorland, Brawley, Calipatria, Holtville, El Centro, and Calexico fire departments were called in to assist in the original larger fire fight, Imperial County Fire Chief Alfredo Estrada said from the scene on Monday, a few hours before the Calexico call.

The chief said it’s difficult to say what started the fire, but the cause is under investigation.

Estrada added that the local strike team was activated on Sunday, July 4, and one crew and a water tender was dispatched to the Lava fire in the Shasta-Trinity Forest in Siskiyou County.

Next
To Get ‘White Gold,’ We Need More Geothermal