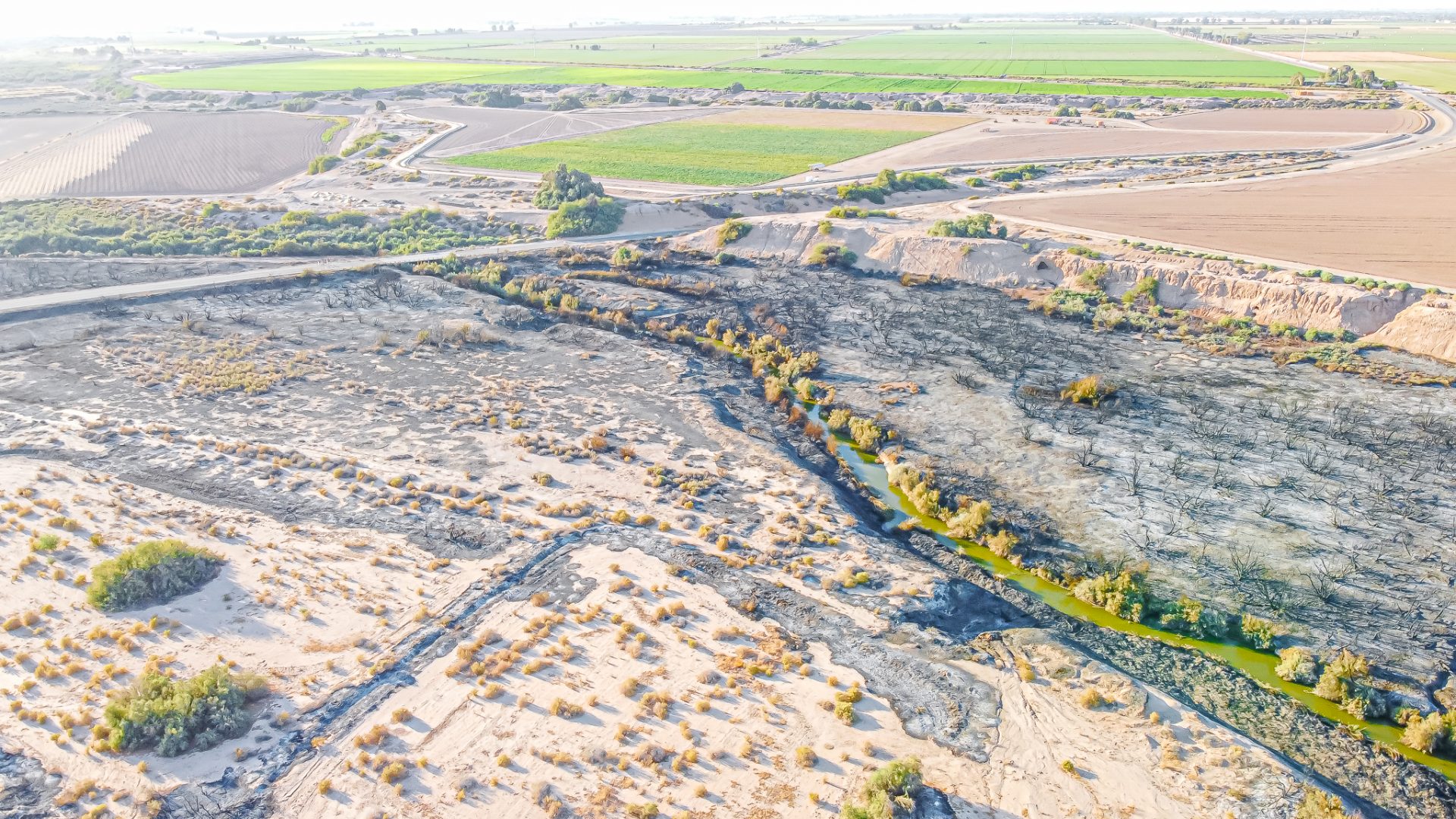 The New River bottom near Farrell Road where it becomes South LaBrucherie Road west of Calexico is shown on Tuesday evening, July 6, after most fire crews had left the area and all roads were reopened. Pockets of brush deeper into the fire area were expected to smolder and produce some smoke for a few days. | CAMILO GARCIA JR. PHOTO
In Public Safety

Calexico’s New River Bottom to Smoke for a Few Days

Pockets “Inside the Black” to Continue to Smolder, One Firefighter Suffers Heat Illness.

All roads were reopened by midafternoon and most all fire crews were released from the area by 5:30 p.m. Tuesday from a blaze that raged from the bridges between Ferrell and Clark roads overnight.

It was an epic response, as two strike teams from San Diego comprised of a total of 10 fire engines and multiple personnel raced to the Imperial Valley late Monday night, July 5, to assist overwhelmed and already exhausted local fire crews that had spent several hours at a brushfire in the Northend of the county.

More than 80 fire personnel, including firefighters and command staff, from department all over the Valley and Yuma County, assisted through the night and into the afternoon on Tuesday.

While the battle was well at hand by dawn, according to Rodelo, there were areas of flareups that kept fire crews busy through noon, around the time when the same fire up near Wiest Lake and the Alamo River north of Brawley rekindled and sent crews from Calexico back up north.

Even though no major threats existed during the day Tuesday, there were still as many as 60 fire personnel working the area, and there were expected moments of drama.

No major injuries were reported among fire crews, but one San Diego area strike team member did become overheated and suffered heat exhaustion, what Rodelo said was considered the only injury of the fire event, albeit minor.

Additionally, around midday, fire crews could be heard over the radio scanner struggling with hotspots, one particularly tense moment came when a contingent of firefighters saw their hoses burn and a lost water pressure while hitting flareups.

Both situations were unfortunate but not to be unexpected, Rodelo said. Of the San Diego crew member who became ill, he said local command does keep an eye on them.

“The heat of the Valley is very unforgiving to those who aren’t from here,” the battalion chief said. “Acclimatization is key, and it would take about two weeks for anyone to become used to any particular climate. So, most of these guys came from the San Diego area and are used to that weather, and we knew that, so it was critical to maximize their assistance before it became too hot for them to work.”

That said, Rodelo said the one firefighter from cooler climes did have to be transported to the hospital.

“All of our personnel is trained to recognize these symptoms and how to treat them,” he added.

With the flareups, moments experienced on Tuesday are common to wildland fires in dense brush where flame can pop up at any time.

“It is not uncommon that some hoses would burst due to exposure to heat from the ground as firefighters advance. This will surely result on loss of pressure at the nozzle,” Rodelo explained. “It is important to highlight that these hoses used in wildland incidents are mostly (not all the time) single jacketed to make them light … of course a double-jacketed hose is better protected but is heavier to advance and carry.”

Next
Energy Future in Coachella Discussed at IID Meeting