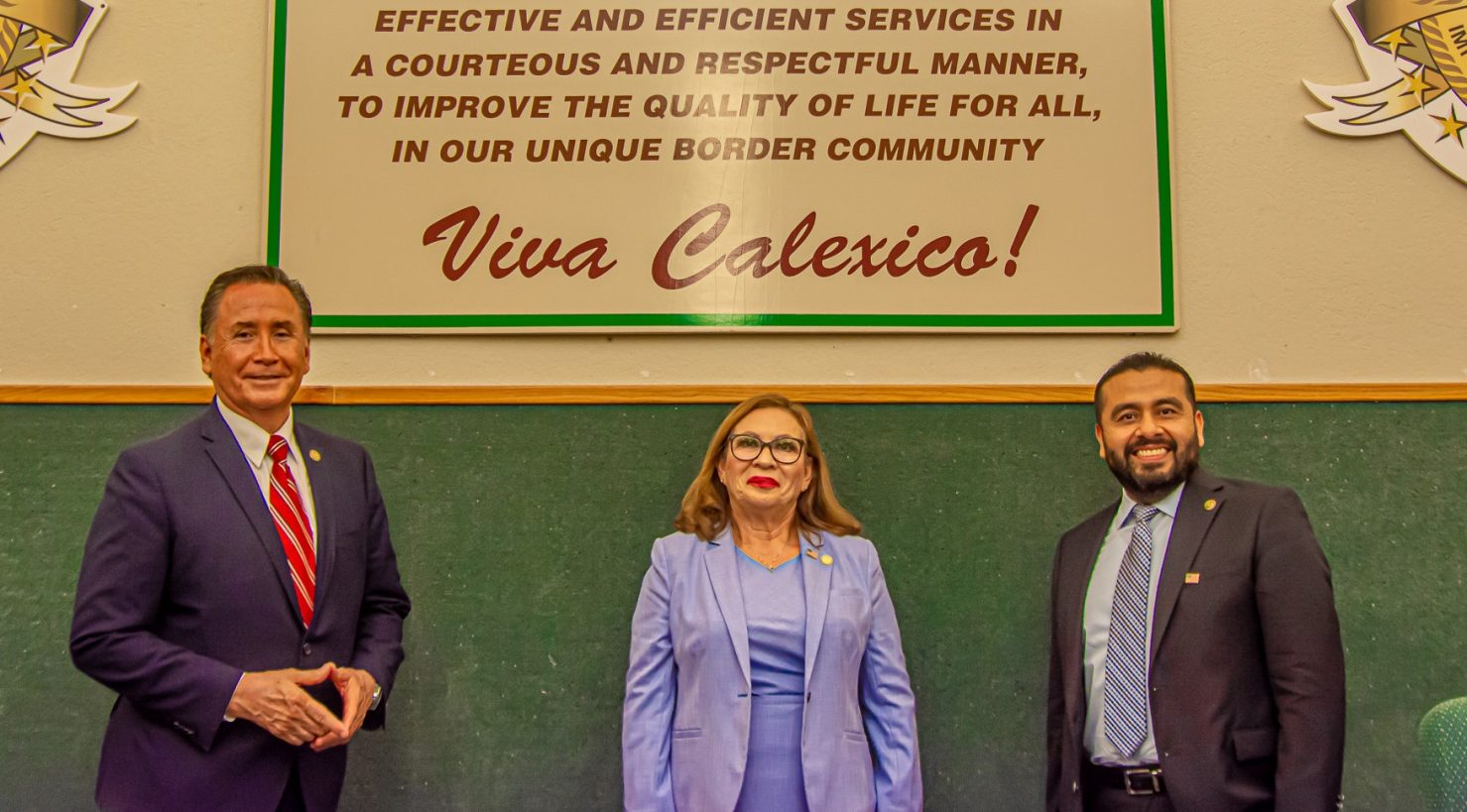 CALEXICO — Even in ceremony there was acrimony among some members of the Calexico City Council, yet that did not stop the celebratory tone that marked the passing of the mayor’s gavel.

On Wednesday, July 7, Javier Moreno was elected as the city’s new mayor and Camilo Garcia as mayor pro tem during a meeting exclusively convened for the annual reorganization of the council.

Surprising was the unannounced inclusion of outgoing Mayor Rosie Arreola Fernandez’s filmed 2021 state of the city address, which was played before the reorganization and is embedded below.

The elephant in the room was the physical absence of Calexico council member Raul Ureña, who attended by Zoom, stayed quiet throughout, and let the votes (or lack thereof) cast for a ceremonial transition of power speak volumes about the bad blood and contentious relationship he and his voting ally, council member Gloria Romo, have fostered with the remainder of the council.

When it came time to elect Moreno as mayor, it was a split 3-2 vote, with Ureña and Romo voting in opposition. Garcia, who has been a more neutral figure in the ongoing fireworks between Fernandez-Moreno and Ureña-Romo, fared a little better with a unanimous-yet-split vote of 4-0-1, with Ureña choosing to abstain.

Moreno and Garcia both struck a hopeful tone moving forward, clearly happy to take on their new roles with family and friends in the audience.

In an odd ordering of presentations on Wednesday night, it’s as if Moreno never truly got the opportunity to give a mayoral statement; rather, he reflected on his service under Fernandez as mayor pro tem and alluded to the future.

“I am proud and honored to have been mayor pro tem for the city of Calexico. I wish to thank the city of Calexico for giving me the opportunity to serve,” Moreno said after Fernandez presented him with a plague for his service immediately after the votes were cast to elect he and Garcia.

“All department heads and staff, it’s truly been an adventure; motivating, challenging. But above all, rewarding,” Moreno said. “Madam Mayor, I have enjoyed your support. Together we recognize the valuable gifts handed down from the past. All that provided a solid foundation upon which together we envision, rediscover, repurpose, build and expand it.”

For Garcia, it was clear he was ready for a more forward-leaning role on the council, one year removed from the mayorship now.

“We need to move forward, in spite of the challenges (from) a pandemic that we’re starting to see that is finally, finally winding down,” he said. “We had a chance to listen to two residents say their (public) comments and their sentiments. And it’s a reminder that, you know, we have many more challenges. We might be getting away from a health emergency, but we continue to have other emergencies.

“Our fiscal state is in better shape, was in good shape, but not in the shape that we need to be. So, we’ll continue to work,” Garcia said.

The new mayor pro tem seemed to be easing into addressing the fractured relationship that has marked the last year of Calexico city politics. He spoke of learning of the job and growing into the role of council member, accepting differing points of view by turning them into something positive, “whether you’re a resident of Calexico, a visitor, or someone that conducts business in Calexico. I want that when you come here, you see the positive, you see the hope.”

Finally, Garcia, as if speaking directly to Ureña in absentia, even turning his head to look at Romo at one point, extended the olive branch.

“Yes, there are differences. But those are also opportunities to learn. We’re starting with a new mayorship. Every person has a different way of doing things … But as a team, we need to make sure that we learn to work with each other,” he said. “I think we have plenty of time to do that. So, I’m hoping that we can move forward and learn from those opportunities that we gave each other, to learn from each other, put those aside whatever differences and look at … a brighter future.

“I think in reality, we need to concentrate (to) provide efficient services in a courteous and respectful manner. And not just to the citizens, but among ourselves here. So that’s my invitation, my challenge, and my offer to my fellow council members, and to the residents, and to all of you here today,” Garcia said.

Fernandez, earlier in the meeting, gave a parting address as she gave up the gavel, and her final words as mayor were not without a barb for Ureña, primarily, and Romo, who she has clashed with at almost every meeting since they have served together.

Fernandez and Ureña have openly waged war from the dais, him with a measured tone and his refrain of “point of order,” while she often appeared to lose her cool and shout him down and cut him off. Outside City Hall, their feud continued — he often lashed out on social media and she, through letters and press releases.

Fernandez’s final address was really just a long list of names and thank yous, and when she did finally get her dig at her nemeses, it was mild.

“Congratulations to our new Mayor Javier Moreno and Mayor Pro Tem Camilo Garcia. You both have a vested interest in serving our city. And in spite of all the oppositions I experienced from two members of this council, the support I received from both of you kept me focused on my duties as mayor,” she said.

“In concluding, I want to thank my family and friends for your loyalty and support. To all the citizens of Calexico, it was an honor serving you as your mayor this past year. And like I said in the state of address, I look forward to continuing my work as a member of your City Council. Thank you again and God bless you all,” Fernandez added.

The reorganization of a council is usually a benign process, collegial even when members don’t see eye to eye. Ureña gave his reasoning behind his voting in a statement on Thursday, July 8.

“I voted no (for Moreno) because he has betrayed his election promises since day one. Preserving the status quo and blocking conversation,” he stated.

“Camilo is a council member that contributes well to the conversation as a council,” Ureña continued. “His actions, however, have preserved the status quo up to this point. I would have voted for him as a mayor that could build bridges in the short term, while the people of Calexico get a chance to make their voice heard yet again.

“Calexico roared for change in 2020. My abstention was a vote of indifference waiting to see action from Mr. Garcia. My no vote (for Moreno) is a certain no for a person who comes with no plans outside of nonprofit organizing. No plans and no proposals as a councilman directing a city. The people want policy, the people want change,” he stated.

State of the City Address

Not on the agenda and not promoted on any city website or social media page that could be found, the city of Calexico unveiled its pre-filmed state of city address during Wednesday’s meeting. It preceded the council reorganization.

The 16-minute presentation was posted to the city’s website. It’s embedded here, so it’s not covered in detail.

The address touched on the pandemic, the recently passed city budget, parks projects, infrastructure and streets projects, services provided by police and fire, arts and recreation, the library, and Taco Bell.

“Finally, I want to thank our residents for hanging in there and for being patient with us as we adopt and meet the unique demands caused by the pandemic,” Fernandez said in closing in her address. “Calexico has a bright future. By working together, we can make great things happen. It is up to us, all of us to make this city to flourish.”